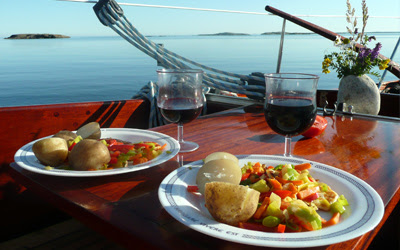 One of the winemakers that we’ll be visiting in the 2014 New Zealand trip (Unison Vineyards) has an email moniker that begins with “FoodisWine.”  Each time I communicate with him it reminds me not only of the nutrition in wine, but equally importantly, the notion that wine is meant to be consumed with food.

What exactly is the nutrition in a glass of wine?  Many of us who guard our calories know that a regular 6 oz pour of dry wine contains about 150 calories.  Nearly 90% of these calories come from the alcohol. White wine is the same as red.  Sweet wines obviously contain a larger number of calories and are directly related to the amount of sweetness and alcohol content of the wine.  A Sauternes, for example, can have nearly twice the number of calories than its counterpart dry wine.

Some of you may not know however, the following trivia about the nutrition in a glass of wine:


·        Small amounts of riboflavin and niacin are offered


The biggest health benefit of wine is not its nutritional value but rather its protective cardiac action.  Check out my previous posts on this subject:
http://wineknowstravel.blogspot.com/2012/05/red-wine-and-your-health.html 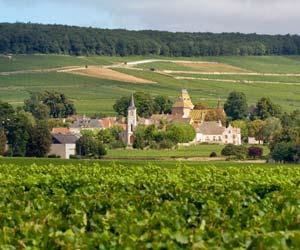 
Blink and you’d miss it if it were not for the massive hill of Corton looming above the tiny hamlet of Aloxe (pronounced Alosse).   Located in Burgundy’s illustrious Cote de Beaune, this village may be small (<200 inhabitants) but its reputation is colossal in the wine world.  Surrounded tightly by vineyards in all directions, Aloxe cannot grow much as the possibilities to build new housing are long gone---no one would ever consider ripping out a single vine in one of Burgundy’s most prized districts, referred to as Aloxe-Corton.


So what’s so special about Aloxe-Corton?  Everything.  This area produces, in my opinion, the epitome of both reds and whites.  For Burgundy, this means the crème de la crème of Pinot Noirs and Chardonnays.  The reds outnumber the whites by nearly 50 to 1, however, Chardonnay was not planted until the 19th century.


The entire village has been granted Grand Cru status.   Most Pinots are called “Corton,” the Chars mainly are referred to as  “Corton-Charlemagne”  (named after Emperor Charlemagne who granted the original lands for the vineyards in the 8th century).  This quiet little is village is the only one in all of Burgundy that produces Grand Cru reds and whites.  Need I say more?


How does a Corton or Corton-Charlemagne differ from other Grand Cru Pinots and Chars from other districts of Burgundy?    The thing I most remember about the red Cortons that have passed through these lips is their silky texture, gorgeous complexity and elegant length of finish.  The Corton-Charlemagnes offer an intense fruit-mineral flavor profile and an exceptional “souvenir” (finish).   Regardless of wine,  I lean toward red typically and the red Corton is no exception.  It would definitely be a contender for my “last meal.”
Posted by June Forkner-Dunn, PhD at 1:00 AM No comments: 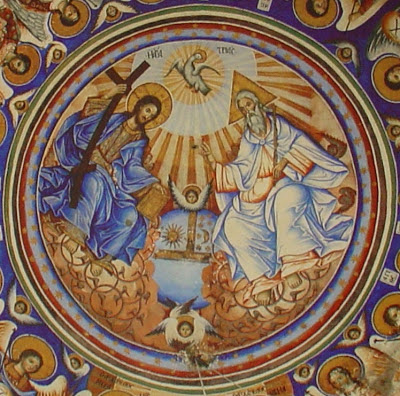 Grenache, Syrah and Mouvedre (aka GSM) are the Rhone’s sacred trio of grapes.  In the northern Rhone, Syrah dominates the blend in famous wines such as Hermitage and Cote-Rotie, however, in the southern Rhone Grenache leads the pack in the superstar wines from Chateauneuf du Pape where typically over 75% of the composition is Grenache.
I love Grenache.  One of the most versatile red grapes in the world, Grenache thrives in hot, dry climates such as the Rhone, Spain (named Garnacha), California (sometimes referred to as Alicante) and Australia.  The varietal can produce wines that range from light to full-bodied; from simple, inexpensive wines that offer immediate satisfaction to complex ones that are cellar worthy and do not come cheaply.  Grenache is all about fruit…strawberries, blackberries, raspberries.  But, there can also be an interesting layering of spices such as allspice, cinnamon or pepper, as well as subtle nuances of floral notes.


Syrah (also called Shiraz in Australia) was thought to have been brought by the Phoenicians, but  DNA testing now shows it to be indigenous to southern France.  Unlike Grenache, Syrah contributes firm tannins that make for powerfully flavored and full bodied wines.  However, similar to Grenache, it offers rich fruit flavors, but this time it’s black cherry, blackberry and plum.  Syrah also provides a beguiling spice profile of cloves, licorice, white or black pepper and even chocolate.
Mourvedre (also known as Mataro in Spain and the US) tends to produce deeply-colored and tannic wines that can be high in alcohol.   Thought to be of Spanish origin, the varietal is mainly used in the Rhone for blending and is rarely vinified as a varietal except in the appellation of Bandol (just a few miles from the Mediterranean) where the cooling maritime influence can change it into a rockstar.  Mouvedre offers earth flavors such as leather, as well as dark fruit flavors.  There is often a patina of chocolate.

If you’re joining the Wine-Knows harvest tour this September you’ll have several opportunities to sample GSM in the famous southern Rhone appellations of Chateauneuf du Pape and Gigondas.  In 2015, Wine-Knows will be hosting its first-ever tour exclusively to the entire Rhone Valley.  Visits will include Hermitage, Cote Rotie and Condrieu in the north along with the southern part’s Chateauneuf du Pape and Gigondas.

How is Champagne Really Made? 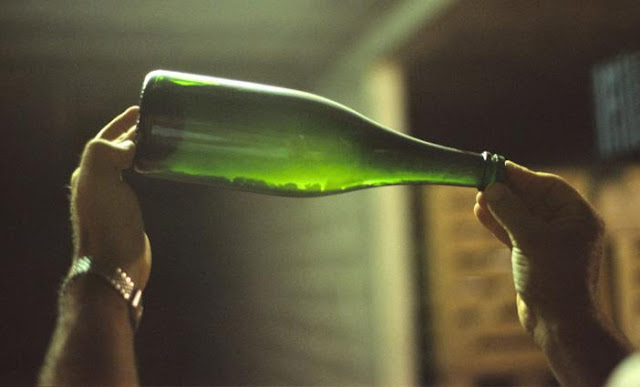 Many of Champagne's complexities are a result of aging with yeasts
There are several ways to actually make a sparkling wine.  One is to simply add carbon dioxide to a regular wine….voila, you have instant bubbles.  But, for true French Champagne there is only one way to make it.   It’s called the “Methode Champenoise.”   Here’s an overview of the process and why this technique creates a much more complex wine.
In the Méthode Champenoise non-bubbly wine that has already gone through fermentation is placed in a bottle along with some yeasts and a small amount of sugar.  Like in making bread, yeasts need sugar to jump-start their activity.  And, exactly like in bread-making the yeasts’ action gives off carbon dioxide bubbles as they work.  As the wine is in a bottle secured with a cap, this carbon dioxide is trapped and becomes the coveted bubbles we all look forward to appreciating in a glass of Champagne.  This process is a secondary fermentation, as the wine undergoes a second fermentation in the bottle due to the added yeasts and sugar.

Wines produced by the Méthode Champenoise must remain in contact with the yeasts for at least 15 months by law.  This means that wine is stored in the bottle long after the yeasts have stopped working.  It is this resting period that allows for Champagne to develop complexity from its interaction with the dead yeasts.  Many of flavor nuances in Champagne (e.g. aromas of baked bread & nuttiness) are a direct result of their contact with the remains of the yeast cells.  Moreover, the creamy mouth texture is also related to interaction with the yeast.  Now, the challenge is to remove the yeast debris which causes cloudiness.  Here’s how that is done.


First, the dead yeasts are slowly by gravity moved to the neck of the bottle.  This act is called “riddling.”  Painstaking each bottle is rotated by hand, little-by-little, over a period of several months so that it stands almost vertical.  With each labor intensive rotation, the cellular debris of the dead yeasts is moved closer to the tapered end.   Once all the yeast fragments are at the end of the bottle, the next step in the process occurs.  The neck of the bottle (still in its upside down position) is dipped in a frozen bath.  The dead cells, attached to the cork, become frozen.  Very quickly, the cork with the attached  “ ice cube of dead yeasts,”  is removed and a new cork inserted.  This freezing process and cork removal is called “disgorgement.”
No other sparkling wine in the European Union  may use the word Champagne or the Méthode Champenoise on their labels or any advertising material.   The word Champagne is carefully guarded by law and can be used  only by the sparkling winemakers of the Champagne district.  On this September’s tour we’ll learn all about these super-stringent laws prohibiting the unlawful use of the word Champagne, we’ll observe the riddling process as well as view the cellular debris of yeasts as the Champagne is aging, and if we’re lucky, we’ll be able to watch disgorgement.  For sure, we’ll be have ample opportunities to drink the world’s most famous bubbly.

Posted by June Forkner-Dunn, PhD at 11:00 AM No comments: 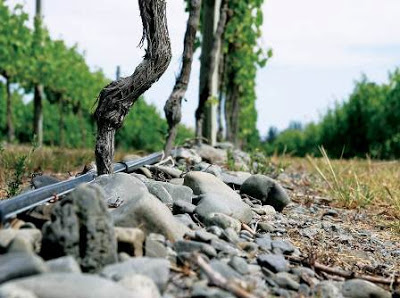 The Gimlett Gravels terroir
We visited New Zealand’s oldest wine region last year on our reconnaissance trip.  Established in the 1850’s, Hawke’s Bay is also the country’s second largest wine district.   This is premium red wine country.  More than 80% of New Zealand’s Cabernets Sauvignon and Franc, Merlot and Syrah are grown in Hawke’s Bay, but the area also offers some stunning whites such as Chardonnay and Sauvignon Blanc.   Like all fine wine producing areas in the world, this district is all about terroir.


Located on roughly the same latitude as Bordeaux (but opposite hemispheres), Hawke’s Bay has a similar maritime climate as its French counterpart.   But there’s another important similarity.  One of the sub-districts of Hawke’s Bay offers a unique gravel soil.   Called the Gimblett Gravels, these soils were deposited when the local river changed its course during a huge flood in 1867.  Those of you who have visited Bordeaux’s Medoc with Wine-Knows, have seen similar gravel-like soil, a result of erosion from the Pyrenees with its debris carried down over centuries by rivers.   The stones, which act to radiate heat, provide an important respite from the chilly marine weather in both countries.
Located on New Zealand’s north island just a few miles from the sea, the Hawke’s Bay wine district boasts one of the most enchanting towns in the country.  Napier is an architectural & gem.  Destroyed by an earthquake in the early 1900’s, the town was rebuilt at the height of the Art Deco period and its downtown is replete with Art Deco buildings.
Favorite producers?  Listed in alpha order, here’s the scoop on our faves:
Those of you coming with us in March 2014 to New Zealand will be visiting all of these wineries, two of which will include dinners with their winemaker.
Posted by June Forkner-Dunn, PhD at 1:00 PM 1 comment: