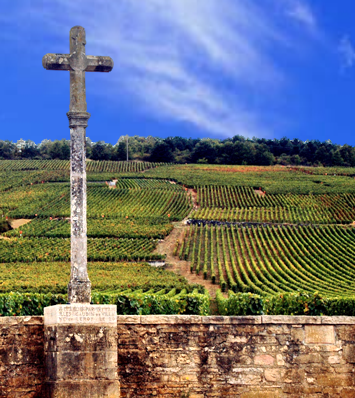 The Cote d’Or (“golden hills”) is Burgundy’s most famous district. It’s also some of the priciest real estate in the viticultural world, producing the Rolls Royces and Bentleys of Burgundy’reds and whites. These golden set of hills, which begin <200 miles south of Paris, run about 30 miles north to south but are only a mile in width. The district is located between the mustard-renowned Dijon and Beaune (Burgundy’s quintessential medieval gem of a town). 32 of Burgundy’s Grand Cru vineyards are located in the coveted Cote d’Or.

The Cote d’Or is made up of a string of tiny villages at the base of the golden hill range. These villages have become synonymous with word-class wines. (If you’ve never heard of the villages of Gevrey-Chambertin, Vosne-Romanee or, Puligny-Montrachet then you are a beginner in the Burgundy scene.) The best vineyards of the Cote d’Or are those in middle of the hill range, the kind of “sweet spot” for the best terroir (best soil, best weather, best drainage).

The Cote d’Or is actually split into two sections. The Cote de Nuits is the “money-honey” district. The northernmost 13 miles of the golden hills, the Cote de Nuit is red country (99% pinot noir). Grand Crus include the some of the most elite wines on the globe such as La Romanee Conti, La Tache and Clos Vougeot. It’s no accident that 24 of the 33 Grand Cru vineyards of all of Burgundy are positioned in the celebrated Cote d’Or.

All of the participants on this Fall’s tour to France will visit wineries in both the Cote de Nuits as well as the Cote de Beaune of Burgundy’s Cote d’Or. You’re in for a “golden” experience.
Posted by June Forkner-Dunn, PhD at 1:00 AM No comments: 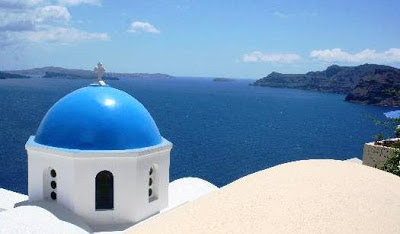 The exquisite island of Santorini is a 45 minute flight from Athens…but it’s a world away in many respects.   While Athens is traffic-clogged, smog-ridden and politically chaotic, Santorini is the antithesis.  If you’ve seen a travel poster or magazine cover with a dazzling photo of a Greek island, chances are it is Santorini.   This little piece of paradise offers mind-boggling vistas of bright blue skies against a jaw-dropping backdrop of white-washed hilltop villages and crystal clear seas.  The only chaos a traveler to Santorini is likely to encounter will be trying to decide which of the island’s superb white wines to order with dinner.


Approximately 3,600 years ago one of the largest volcanic eruptions ever recorded took place in this area and what remains is the island of Santorini.  The island’s rich, volcanic soil produces wonderful dry white wines chocked full of complexity.  Growing conditions are brutal as the island’s arid climate, high mountains and strong winds are particularly inhospitable to agriculture. Vines that survive produce powerful, well-structures wines.


The island’s darling grape variety is a white by the name of Assyrtiko (a SEER tee ko).   While Assyrtiko is grown in other parts of Greece, it is indigenous to Santorini.  It is here at its birthplace that the grape reaches rock-star status in the island’s well-drained, mineral-rich soil.  Santorini Assyrtiko is often referred to as a “white wine with a red wine's character” due to its solid acid structure and full-body.  Because of its acids, it is one of the few white wines than can age beautifully.   The robust acids also make for a perfect pairing with the island’s seafood driven cuisine.   Flavor-wise, Assyrtiko is bone dry and its profile is similar to Riesling---lemon, lime and mineral.

Most people associate the island of Santorini with unparalleled beauty and jet-setting hideaways.  Those in the know, however, understand that it produces a world-class white wine.  Coming on the private Greek yacht  with Wine-Knows this Fall?   After our week at sea, we’ll be staying on Santorini for 3 days and will be visiting the island’s top producers.

The Person Who Changed the Course of Champagne 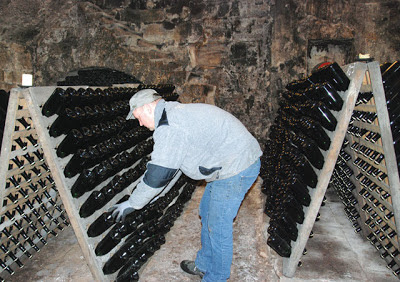 Prior to my last post, many readers may have thought this article was about Dom Perignon who is erroneously credited with inventing Champagne. Not only is it not about him, but it’s about a woman….a widow no less. This story is about how the iconic Veuve Clicquot (veuve means “widow” in French) changed the landscape of the modern day Champagne industry.

Barbe-Nicole Ponsardin was the daughter of a wealthy father who was a member of Napoleon’s inner political circle. (In fact, Mr Ponsardin was granted the title of mayor of Champagne’s most famous city, Reims, by the Emperor.) Mademoiselle Ponsardin married into an equally affluent and well-connected family, the Clicquots. A few years later her young husband died leaving her a significant business involved in banking, wool trading and wine production. The year was 1805 and the widow Clicquot was only 27 years old.

In the early 1800’s it was unthinkable for a woman to run a company but the veuve Clicquot was determined to take over Clicquot’s wine-making operation. To complicate matters further, France was in turmoil due to the Napoleonic Wars, as well as the French Revolution. But the clever, unstoppable widow persevered against all odds. Totally immersing herself in learning every minute detail of the family’s wine business, she embarked on a career of risk-taking that few men may have had the guts for.

Although the widow Clicquot is known for several innovations in Champagne, the one that she is most famous for is inventing a process that revolutionalized the sparkling wine industry. Prior to her invention, Champagne was cloudy and gritty. These unpleasantries were caused by dead yeast cells (yeasts are used to create the bubbles in Champagne). Madame Clicquot developed a method to get rid of the disagreeable yeast debris. She called it “riddling.” Here’s how it works.

Riddling is a several month process of gradually turning Champagne bottles into an upside-down position. This painstaking and labor-intensive process moves the yeast sediment by gravity to the neck of the bottle where it settles against the cork.  The neck of the bottle (still turned upside down) is then frozen in an ice bath and the dead yeasts freeze into a small ice cube up against the cork. The bottle is opened, the cork very quickly removed (and with it the frozen plug of dead yeasts), a new cork is replaced. Voila! The Champagne is now clear and free from any grainy yeast debris.

Not only did Madame Clicquot invent the riddling process, but she designed a special rack to efficiently and effectively rotate (or “riddle”) the bottles. This process and these racks are still used today in sparkling wine production around the world, although larger wineries have recently begun using mechanical riddling machines.

When the veuve Clicquot died at the age of 88, she was still intimately involved in her wine business. Madame Clicquot was also one of the richest women in Europe. Over the course of >60 years, she had taken her namesake brand from a small family winery to one of the leading Champagnes. While the widow Clicquot will always be remembered for her critical impact on the sparkling wine industry, she should also be acknowledged for being one of the first businesswomen of the modern era.

For a fabulous read on the widow Cliquot’s life and her many contributions to the world of Champagne don’t miss The Widow Clicquot: The Story of a Champagne Empire and the Woman Who Ruled It by Tilar Mazzeo. Moreover, if you’re coming with Wine-Knows to France in September, we’ll be visiting Veuve Clicquot for a private tour and tasting where you’ll be able to see many of the widow’s memorabilia which have been preserved in the a special museum.

A toast to the widow Clicquot! 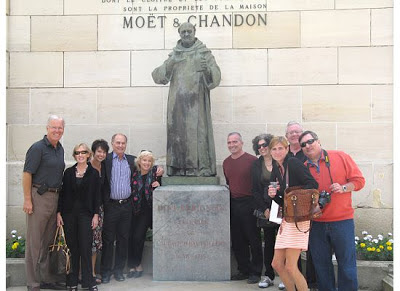 Countless legends attribute the discovery of Champagne in the 1600’s to Benedictine monk Perignon. Truth be known, Dom Perignon (who was cellar-master at the abbey in France’s Champagne district) was not the first to create these illustrious bubbles in a bottle. In fact, there are indications that he may have not only confiscated the Champagne recipe from another monastery, but that he may have been involved in shady financial dealings with the church’s money. Whether any of this is true----or a case of sour grapes---the process of making sparkling wine appears to have been “discovered” at least 100 years earlier by monks in another part of France.

It is important to understand the wine scene in Europe at the time of Dom Perignon. From the Middle Ages through the 18th century, the wine industry was primarily the domain of the church. Monks were the grape growers, the winemakers, and the sole retail arm of the trade. While wine was used in religious ceremonies, the wine that was sold was a lucrative business for filling church coffers.

In the 1500’s, Benedictine monks at a church in France’s southern Languedoc area found an interesting way to trap effervescence in wines. In the 1600’s when one of their brethren from the Champagne area visited, the Languedoc monks gladly shared with the guest how they made their special wine with bubbles. They revealed how the yeast in the fermenting grape juice went dormant during the winter when it became very cold. Next, they explained that the bubbles were created when the yeasts became active again in warmer weather and gave off the gas carbon dioxide in this process. The visiting monk was Dom Perignon.

Perignon returned back to his job as head winemaker at the abbey in Champagne armed with this information about the rudimentary process of making sparkling wine. In the late 1600’s, no sparkling wine was made in his district. Furthermore, all wine produced in the area was red. Monk Perignon is credited with the change from still wine to sparkling in his area. He is also recognized for being the first to use a black grape (Pinot Noir) to make white sparkling wine. Most importantly, however, he is acknowledged for his blending skills. Prior to Perignon, grapes from different vineyards were not blended. Today, blending remains one of Champagne’s hallmarks.

Myths die hard….Dom Perignon has become larger than life. One cannot argue that monk Perignon did contribute to perfecting the art of making sparkling wine. There were others, however, who contributed much more. In fact, one of them nearly single-handedly changed the landscape of the modern day Champagne industry. Stay tuned for more on this person, Veueve Clicquot.
Posted by June Forkner-Dunn, PhD at 1:00 AM No comments: 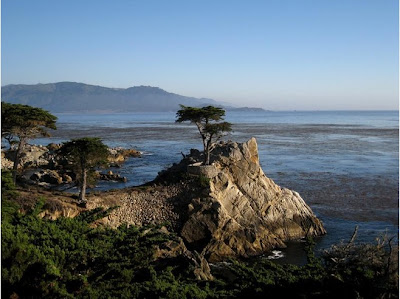 We rented a home in Carmel during December.  While I’ve been to the wineries of nearby Carmel Valley on numerous weekend getaways to Carmel, having a longer period of time to explore the area’s wine opportunities unearthed some new jewels.  It also allowed me time to revisit some of my former favorite wineries to see if they were keeping up the new kids on the block.


Below is a recap of  my picks…listed in alphabetical order.  All are close together and can be done during a weekend escape to the tony village of Carmel.