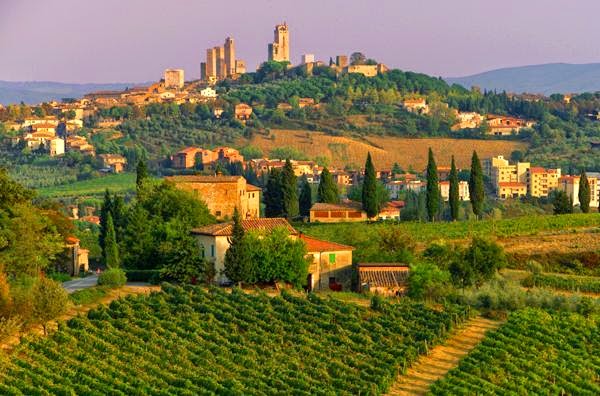 Tuscany is really red wine country (Brunello di Montalcino and Chianti, are both made from the area’s signature Sangiovese grape).  But, those in the know, understand that there are now two white varietals from Tuscany that are responsible for some lovely white wines. Vernaccia di San Gimignano (grown around the medieval walled town of San Gimignano, a popular stop for tourists) and Vermentino (from Tuscany’s coastal area) are producing two wines that command respect.

Vernaccia di San Gimignano was the first Italian white grape to be granted DOC status (1966), which means only grapes grown in a demarcated area around San Gimignano) can use this on their label.  In 1993 the Italian government upped the ante by awarding these wines the special DOCG status (the “G” supposedly guarantees the quality as DOCG wines are tasted by a panel).

Vernaccia from the land surrounding the village of San Gimignano produces a medium-bodied white.  The wine has a characteristic flavor suggesting almonds.  It has good acidity which means it is quite refreshing…even on Tuscany’s hot summer days.  In addition, it works well with vegetables, pasta and fish.   Best producers are Il Colombaio di Chiara and Fontaleone.

Vermentino is one of my favorite summer wines.  The varietal is grown along the Tuscan coastline (and neighboring Italian Riviera, as well as the island of Sandinia where the varietal reaches rock-star status).  In these areas near the sea  temperatures are more moderate than the inland area where Vernaccia di San Gimignano is grown.  The wine is very aromatic, a combination of floral and fruit notes.  Whenever we serve Vermentino (which is frequently as an aperitivo during San Diego’s nearly year-around warm weather) everyone raves and wants to know what it is.  My favorite Tuscan Vermentino is made by Poggio al Tesoro.  Wine-Knows has an appointment scheduled with this producer in the June trip when we have leased a 10,000 square foot villa on Tuscany’s coastline.

Caesar is NOT Italian 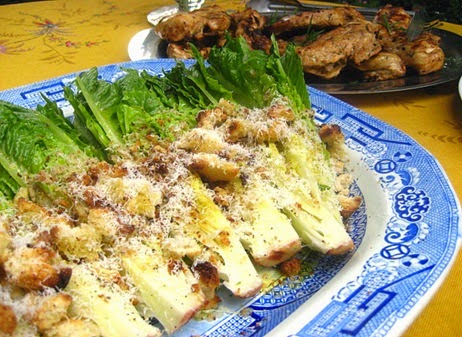 I am still south of the border working on my Mexican tan, eating plenty of local giant shrimp and taking long walks on the beach daily.  Last night at dinner in an upscale restaurant over-looking the sea I heard the next table of diners lamenting that Caesar salad was on the menu, “The restaurant reviews indicated that this was the best quality and most authentic cooking in town.  Can you imagine that they have put a Caesar salad on the menu?”  I didn’t feel it was my place to correct them but the Caesar salad actually originated in Mexico.

The Caesar salad was created in Tijuana, Mexico in 1924.  Caesar Cardini, an Italian immigrant operated a restaurant just across the border from San Diego.  It was the era of Prohibition and many Californians flocked to Tijuana for the 4th of July to enjoy a weekend with liquor.  Caesar’s restaurant ran out of most foods due to the overwhelming crowds…but people kept coming.  Apparently not much was left in the kitchen but some lettuce, eggs and bread.  Caesar made the smart decision to make the most of what he had by adding Italian olive oil, lime juice, Worcestershire, garlic and mustard.  To make up for the lack of ingredients, he decided to make the salad table-side…a bit of culinary theater.  The dramatic flair worked and the salad became a staple on Caesar’s menu from that moment on.

Julia Child said she ate a salad at Cardini’s restaurant when she was a child.  The first, however, documentation of the salad was at Lawry’s House of Prime Rib in Beverly Hills shortly after World War II.

Here’s my often-requested recipe, a mélange of several:

Place all the above ingredients, with the exception of the oil, in a cuisine-art and mix thoroughly.   Then,  with the cuisine art running at full speed, VERY slowly drizzle the olive oil (this should take at least 1-2 minutes, otherwise the oil will not incorporate well and the mixture will separate.)

Menu on a Fan

One of my most memorable meals in Vietnam (and there were many!) was in the countryside outside of the former colonial capital, Hue.  The city of Hue is well known to Americans of my generation due to the Tet Offensive that took place within the royal palace walls during the Vietnam War.  The magnificent home in which I dined was the former villa of the Governor of the region.  Taken over by the North Vietnamese government after the war, this beautiful estate had only recently been returned to the descendants of the Governor.

Our bus driver had a difficult time finding the property.  The interpreter I had hired assured me, however, that we had arrived at the correct location.  I was hesitant as we were dropped off in an alley of a small, rural settlement.  “It’s just 50 meters down the small path---follow me,” the translator beckoned.  Sure enough about 50 yards down the cobblestone passageway I spotted a young elegantly coiffed woman in a long purple silk gown awaiting us.  “Welcome” she said in perfect English with a Vietnamese accent. 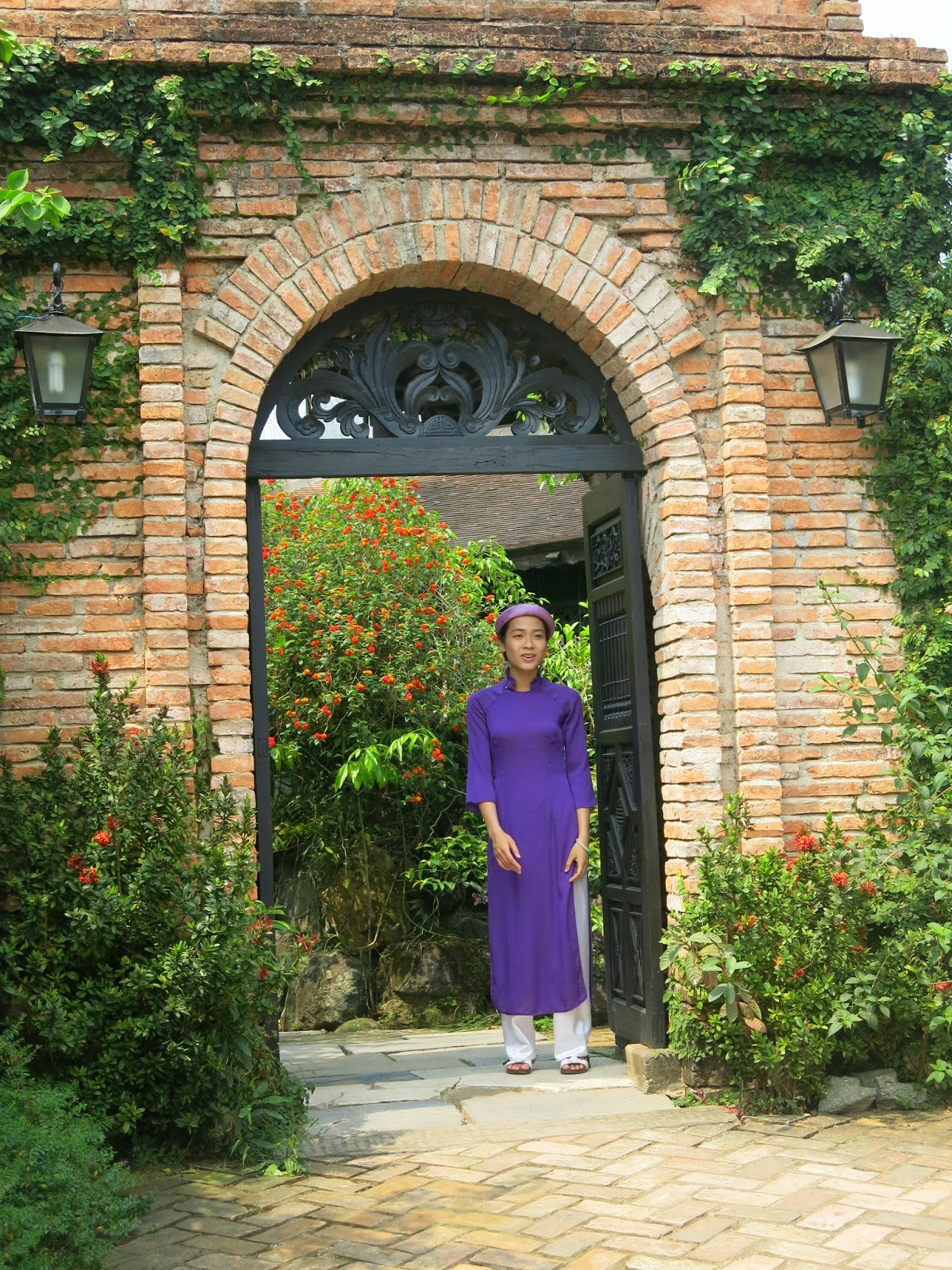 An enchanting oasis awaited us beyond the entrance

We followed her through an ancient doorway that was surrounded by a 15 foot stone wall.  In my wildest dreams I could not have imagined such a place of beauty in this rural setting.  Formal gardens abounded with fountains, statues, and flowers in every color of the rainbow. 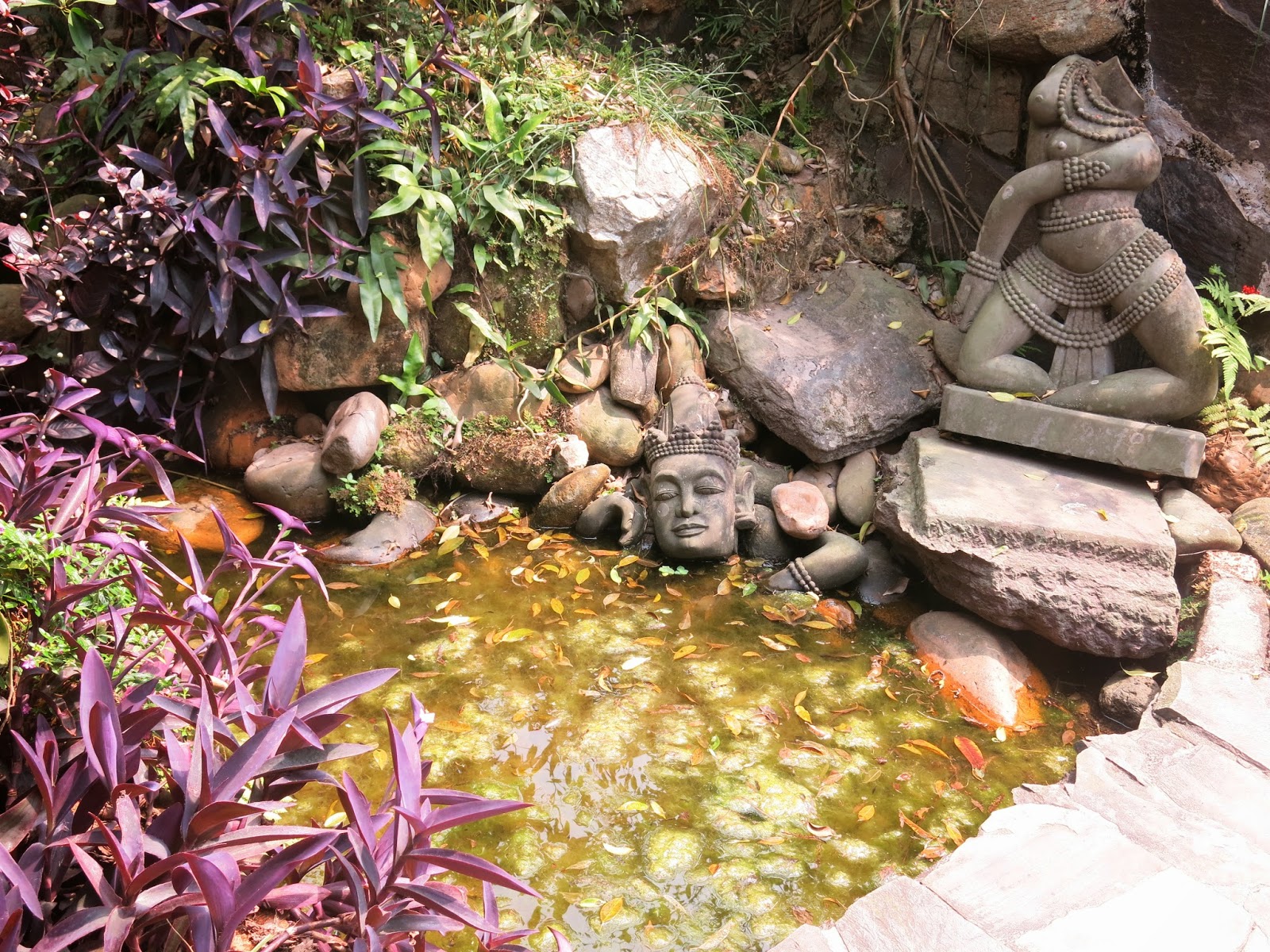 The gardens would have made the perfect Zen retreat.

At the end of the garden the owner stood summoning us warmly into his home.  It was all like a magical fairy-tale. 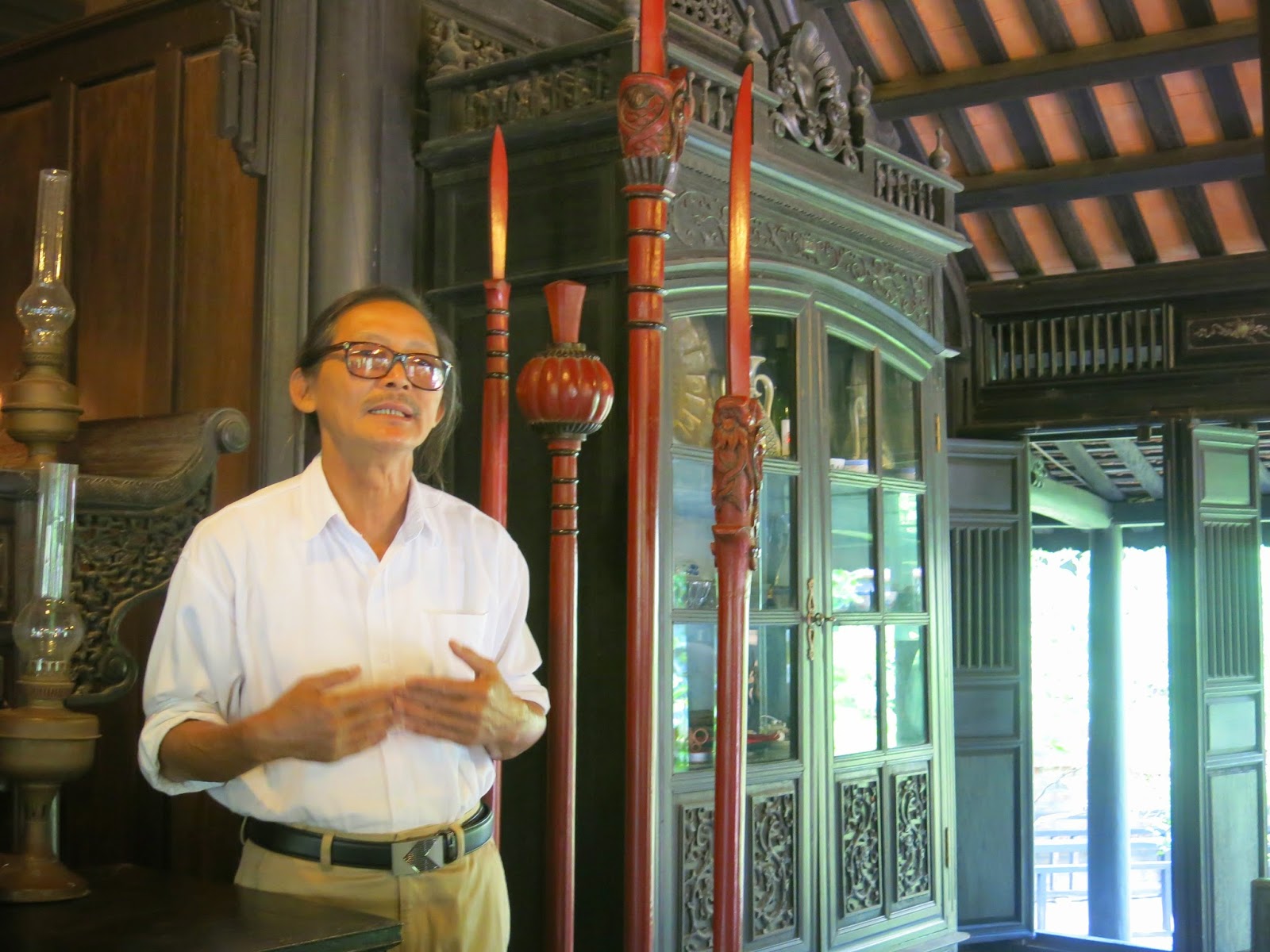 The great-grandson of the former Governor of Vietnam

The proprietor, a successful  architect, proceeded to show us a few of his family’s most cherished pieces---his great-grandfather’s elaborately carved ivory opium pipe caught my eye. 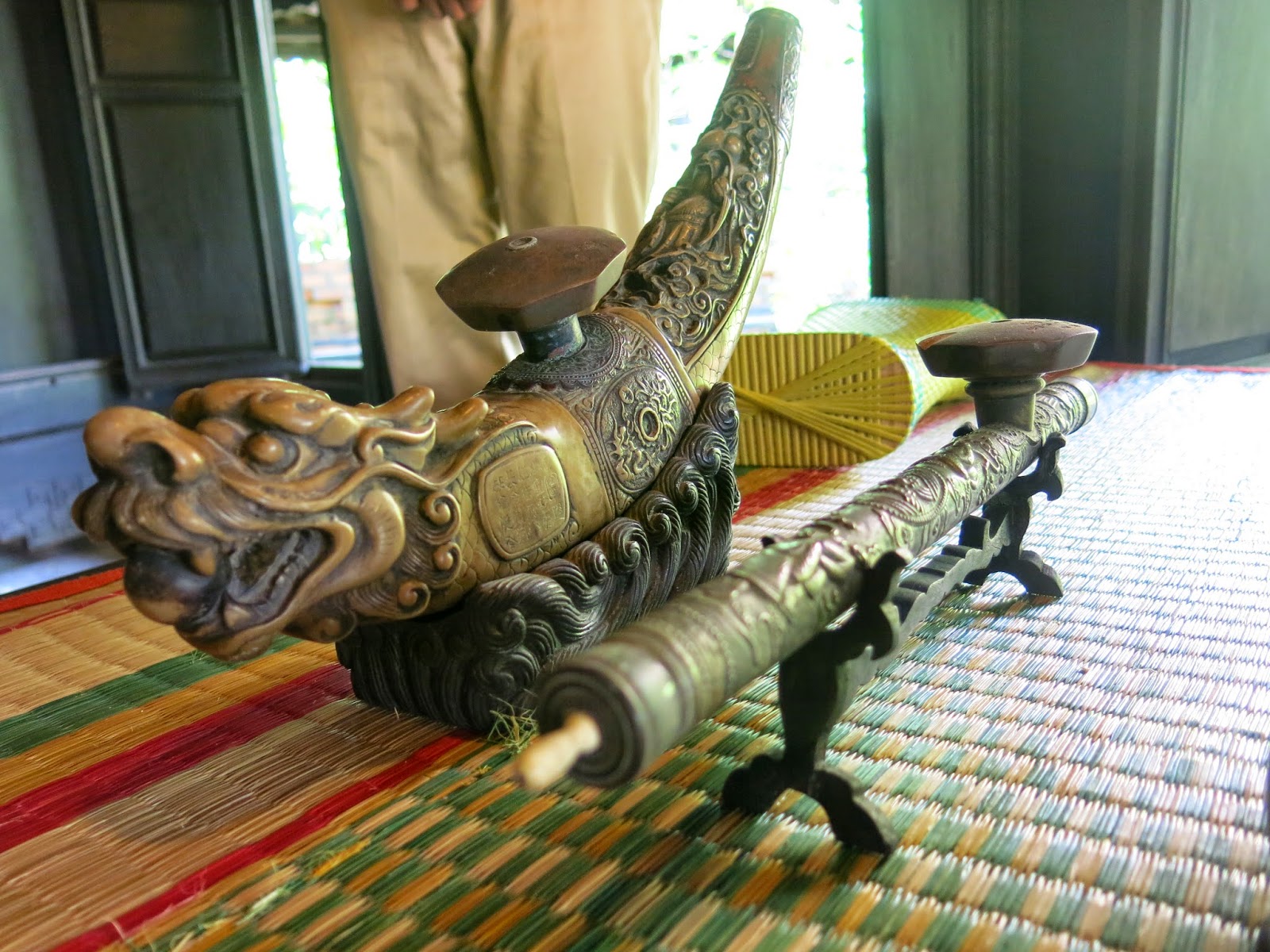 Then, he escorted us into the antique-filled dining room where our private lunch was to be served.  After we were seated he presented each of us with a fan on papyarus that he had personally created.  On each fan he had hand-written in calligraphy the 10 course menu. My most beloved souvenir from the trip

This heavenly salad mélange was one of the first courses... 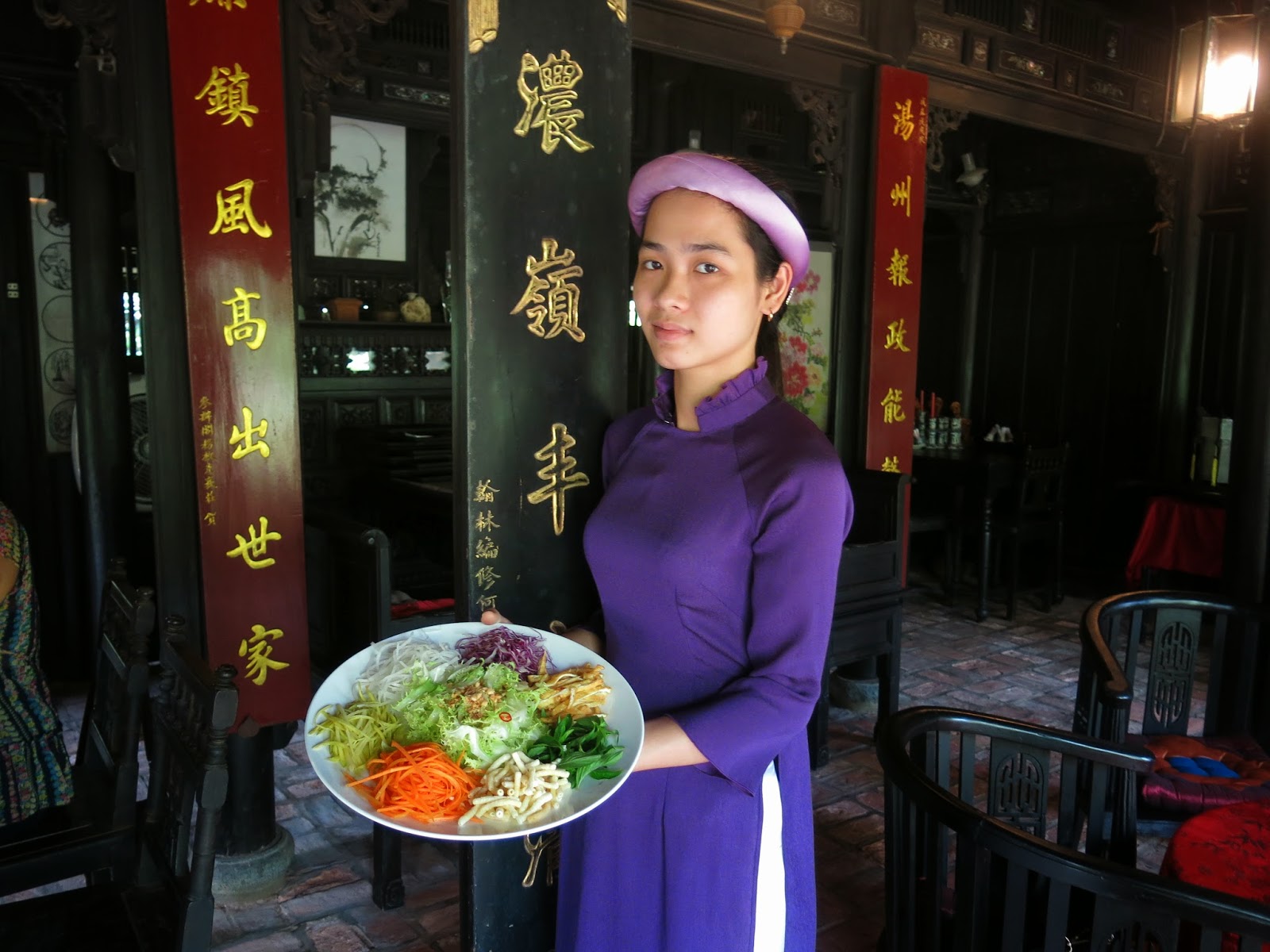 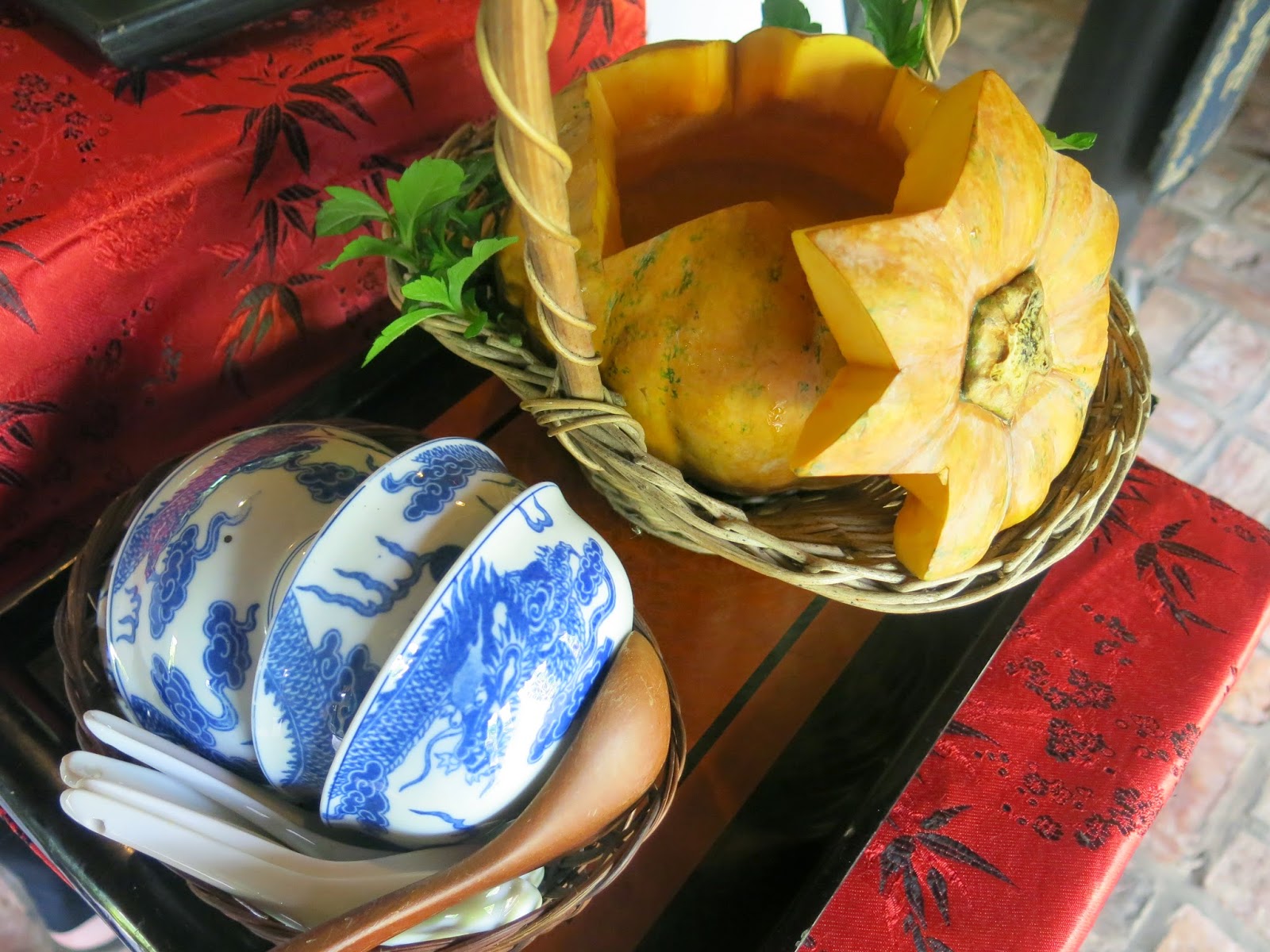 The gourd was cleverly used as a tureen

The entire afternoon was unforgettable on so many levels…an extraordinary setting, a slice of history from the largest military operation conducted up to 1968 by either side in the war, a scrumptious meal of remarkably prepared food, and a fan which is now sitting on my desk to commemorate this once in a lifetime moment.

To the American men & women who lost their lives in this distant part of the world, I send my resounding thanks for fighting a war in which they received little gratitude at the time. 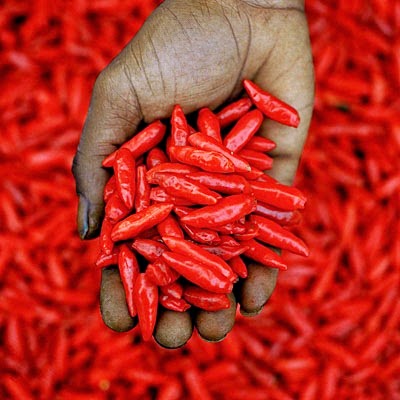 Tabasco peppers start out green & as they ripen turn yellow, orange & then red.

Today I arrived at the beach in Mexico for the month of January---the holiday charity event in our home for nearly 1,000 persons has necessitated a   v-e-r-y  long siesta.  Tabasco was on our dinner table tonight, along with a variety of house-made salsas.  While many may think that Tabasco is a Mexican condiment, the truth is that it was created and has always been made in the good ol’ USA.   Would you believe that a few months ago I even saw it for sale at food store a Rome? Tabasco, indeed, has become a universal culinary phenomenon and is currently exported to over 160 countries.

Tabasco was actually created in Louisiana.  Referred to as “Cajun ketchup,” it is still being made in Louisiana by the same family that began selling it in cologne bottles shortly after the Civil War.  There are 3 ingredients used in the concoction:  peppers, vinegar and salt.  While the recipe is no secret, the process is closely guarded and there are major quality checks along the way to guarantee that every bottle is consistent.

While these special peppers (the seeds of which originally came from the district of Tabasco, Mexico) were until recently all grown on Avery Island in the New Orleans area delta, today the peppers are cultivated all over the world from seeds that are sent abroad.  (These seeds are kept in a vault at the corporate office and are not available for sale). The hand-picked mature peppers are then returned back to the US where they are combined with the other two ingredients.  This “mash” is then aged for three years in oak barrels that were formerly used to age bourbon.  The company’s president, a descendant of the original family that invented Tabasco, tastes the mash daily, similarly to a winemaker watching his wine evolve during barrel aging.

Trademarked in 1906, the Tabasco factory processes 10 million pounds of peppers a year.  The hot sauce industry as a whole, however, is a $1 billion dollar industry.  Tabasco, one of the most recognized brands, is probably the most famous---it has even accompanied astronauts into space.   My chile relleno tonight was accompanied a freshly-made bowl tomato salsa…but there was a bottle of Tabasco on the table.

Posted by June Forkner-Dunn, PhD at 6:57 AM No comments: