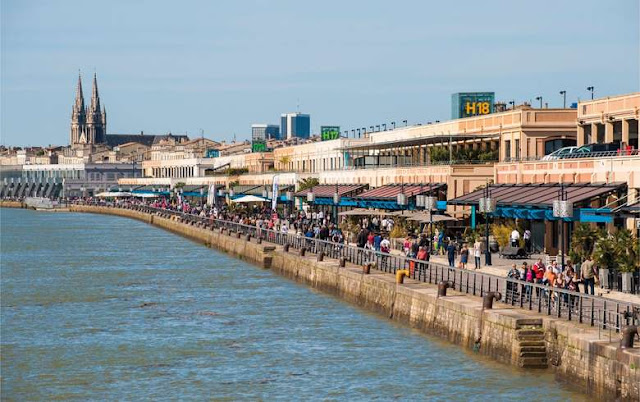 All of Bordeaux has been revitalized, including its culinary scene.

What an irony that the world’s most famous wine city until recently was somewhat of a a wasteland for gourmet dining.  That is all changing.  Bordeaux has been catapulted into one of France’s culinary destinations with several well-known Michelin star chefs recently descending upon the town to open crème de le crème restaurants.

Bordeaux’s redevelopment efforts have paid off.  Big time.  The central part of the city has been under siege for > 10 years:  traffic-snarled streets in the historical section have been pedestrianized and cars rerouted around the periphery.  UNESCO helped out considerably by making Bordeaux the largest urban World Heritage site---this brought mega Euro’s for a multitude of improvement projects like revitalizing the city’s dilapidated and nearly abandoned riverside warehouses---they are now swanky apartments with breathtaking water-views.  A massive public transportation upgrade was undertaken---sleek trams running on rails now carry locals and tourists throughout the once congested city.

These wide-scale improvement efforts have led to a synergistic fine-dining boom.   Joel Robuchon, one of Paris’ most famous three-star Michelin chefs, opened his namesake Bordeaux restaurant at the end of 2014.  Gordon Ramsay, another celebrity Michelin three-star chef from London, recently took the helm at the restaurant in Bordeaux’s Grand Hotel.  Café Opera, located in the city’s jewel box Grand Theatre, has been taken over by rock-star chef Phillippe Etchebest.

There are equally impressive restaurants, however, being opened by non-Michelin star chefs.  Miles, a 28-seat eatery, was opened last year by young chefs who have worked in some of the finest three star Michelin restaurants in France.  Several of the owner-chefs were born outside of France and their fusion menu reflects their native countries of Israel, Vietnam, Japan and the South Pacific.  Belle Campagne is another food savvy restaurant, where locavore chefs source every ingredient from the southwestern area.

Also, fueling the serious food scene in Bordeaux is the opening of Ferrandi, one of France’s culinary colleges for top chefs.  Ferrandi opened its first outpost outside of Paris in Bordeaux.  This is spawning many new chefs, new dishes, and a new way of looking at the world of food.

This gourmet renaissance has been synergistic with altering the culinary landscape of Bordeaux on all levels.  Food trucks are appearing.  An organic food store opened in the city's recent Darwin Center on the waterfront. Wine bars featuring tapas are opening (Le Millesime is especially good), and new boutique wine shops (try L'Univerre) are giving the old-guard shops a run for their Euro's. 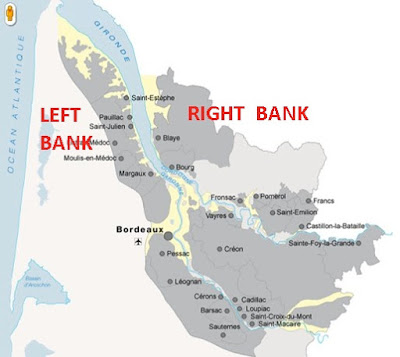 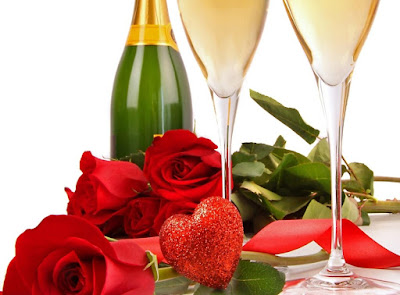 Look no further if you want a special bubbly for a special valentine.  The Barons Rothschild produce one of the best Champagnes I’ve had in a long time.  While the Rothschild family is famous for both of its Bordeaux red wine estates (Chateau Lafite Rothschild and Chateau Mouton Rothschild), their Champagne is produced nearly 500 miles north.  (To be called a Champagne, the wine by law must be produced in the Champagne district of France, just east of Paris.)

The two Rothschild estates in Bordeaux have been rivals since they were first established in the late 1800’s by two Rothschild cousins.  Always trying to outdo the other, the separate branches of the family wine business have always been competitive.  For this Champagne, however, the factions joined forces in 2005 to create something really special on several levels.  They call their bubbly “Barons Rothschild Champagne.”

The Barons produce three different Champagnes.  Their Blanc de Blanc (“white from white”) is made entirely of Chardonnay and is aged for three years.  The Brut, also aged three years, is Chardonnay dominant, however, there’s a good amount of Pinot Noir in the blend, as well as the rather obscure grape, Pinot Meunier (often used to round out Champagnes.)  The Barons also make a wonderful Rosé which is 85% Chardonnay with the remainder of Pinot Noir which gives it a gorgeous color and additional complexity.

Costco had the Rothschild Brut over the holidays, and it’s worth seeking out for any remaining bottles as their cost was extremely fair at $60.  Otherwise, check with your favorite retailer or online (where the web prices vary from $80-120.)   This bubbly is sure to please even the most discriminating Valentine.

There are a few resources I could not live without in planning trips to France.  When it comes to dining or accommodations, below are my two favorite go-to guides that help ensure a marvelous time. 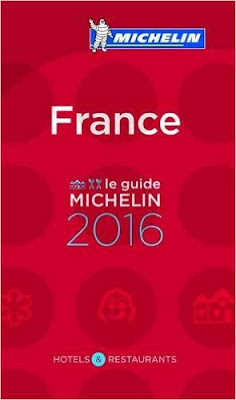 Michelin Red Guide, France
This book is the authoritative source for eating well in France.  The guide is published annually and can make (or break) a chef.  Divorces and bankruptcies have occurred because of demotions by this guide…chefs have even committed suicide for being downgraded.

Every year I’m in France I pick up a new edition, however, the Michelin website (www.viaMichelin.com) offers almost just as much information---and this means you don’t have to lug the heavy $40 book home (the last few years, Michelin has begun producing a paperback version, however, it’s still heavy).  Be advised that Michelin produces two guides for France.  The “red” guide showcases the country’s best restaurants and hotels, while the “green” guide addresses sightseeing.  (BTW…in World War II, American soldiers were all given copies of the green guide as the maps were the best compiled resource France had to offer at the time).

While the red guide rates the top “fine dining” chefs, it also lists restaurants that offer the best value in every price category.  It also points out food establishments that offer a particularly charming atmosphere.   Hotels, likewise, are listed in every price point, however, those that are particularly charming are highlighted with a special designation.  Another advantage is that the guide uses symbols for ratings, thus there’s no need for fluency in French.

I simply couldn’t live without the red Michelin Bible. 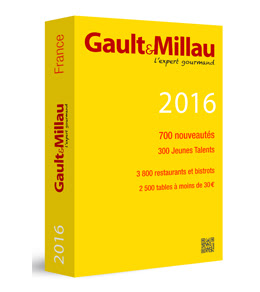 Gault Millau Guide, France (GM)
Like the red Michelin, GM also publishes an annual evaluation of France’s best restaurants.   I particularly like this book as it offers an entirely different opinion on the best places to eat in France.  Some restaurants receive ratings similar to that of Michelin, but in many cases the GM serves up a different perspective on who’s top dog.

I buy the current edition (about $35US) every time I’m in France but I always hate to do so because it weighs several pounds (recently GM has begun also producing traveler-friendly paperback versions.)  There are some other drawbacks to this guide in that it is only published in French.  For those who don’t speak French, you’ll miss the important commentary about the restaurants, however, you would still be able to see their numerical rating, as well as prices.  (BTW…the guide gives each restaurant’s website and these websites are often also in English.)

Similarly to the Michelin red guide, the GM also rates hotels.  Again, non-French speakers will miss the details in the annotation, but you’ll be able to easily understand which hotels get the best ratings.  Unfortunately, GM’s website is available only in French.  One huge advantage of GM, however, is that it also produces a yearly guide on the best wines in France…naturally, only in French.