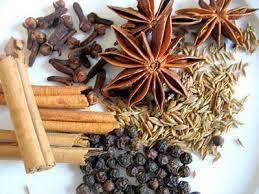 A pungent melange of spices with star anise leading the show

I’m a lover of Vietnamese food.  Prior to moving to San Diego, every week in the Bay Area I would treat to an ethereal grilled chicken lunch at a Vietnamese restaurant near my office.  I never could figure out this dish’s spices, but when I went to Vietnam last year it finally hit me during a cooking class:  five spice powder!  While this mixture is used in Chinese restaurants, it is not used in households in China for daily cooking.   In contrast, it’s a standard in Vietnamese homes.

Google “Vietnamese chicken with 5 spice” and you’ll be served up in a nano-second more than 1 million articles.  While chicken and five spice is a marriage made in heaven, the Vietnamese use this mélange of flavor to add zest and pungency to everything from their signature Pho soup, to noodles, or stir-fries, as well as a variety of sauces.

What are the five spices?   While ingredients and proportions  may vary among producers (and from country to country), star anise creates the backbone for most Vietnamese preparations.  Cloves is the next note, followed by cinnamon, Sichuan peppers and finally fennel seeds.  Occasionally, ginger, nutmeg, turmeric, coriander or cardamom may be added to the blend in lieu of one of the other ingredients.
In Vietnam, every household seems to have a recipe for chicken cooked with five spices where is used in a marinade, or even as a rub.

Christine Ha, MasterChef’s winner in 2013, stunned the television audience throughout the competition.  First, she was blind; second she was Vietnamese. Her masterpieces put Vietnam on the culinary map of many Americans who had not tasted this cuisine.  In her first book after the show, Recipes From My Home Kitchen, Christine uses homemade five spice in her “Mama’s chicken noodle soup.”  Her spice mixture was roasted star anise, coriander and cloves, along with charred ginger (“coaxing every bit of sweetness and flavor from the ingredients which translates to a more flavorful stock.”)

Here is my favorite recipe using five spice--- a tribute to the first Vietnamese dish I fell in love with in the Bay Area.  It can be used for any type of poultry or meat.

VIETNAMESE MARINADE FOR POULTRY OR MEAT

Mix all of the following together:

Put the meat or poultry into baggie with the marinate.  Refrigerate, turning it occasionally to ensure full coverage.

Note:  it's critical to marinate chicken or meat for at least 8 hours. For the best results, do 24 hrs.

Posted by June Forkner-Dunn, PhD at 2:05 PM No comments:

Why Sagrantino Should be on Your Radar 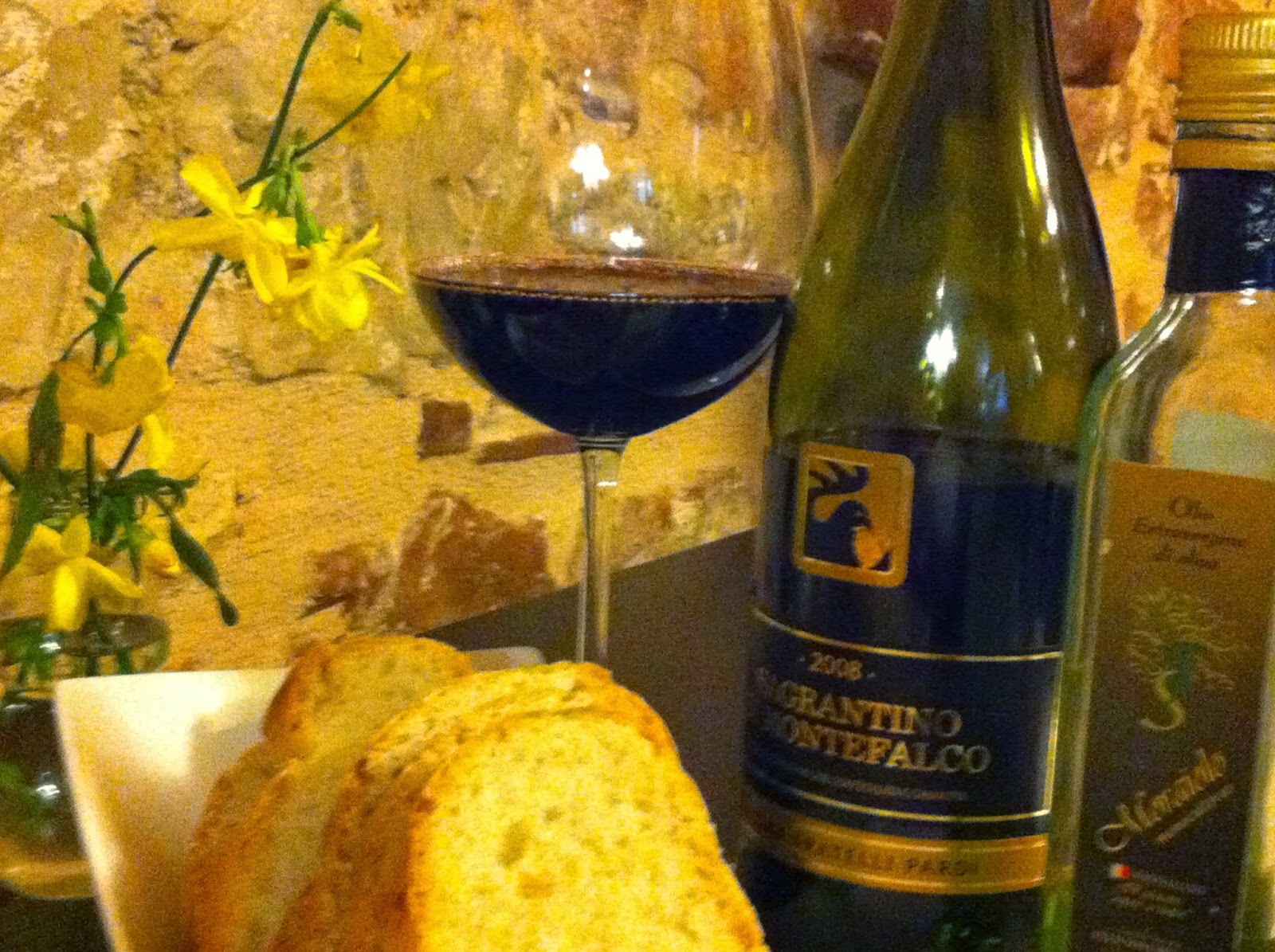 If you're a wine lover and you've been to Umbria then most likely you know wines made from the Sagrantino grape. If you've dined in an Italian Michelin star recently and you've asked the sommelier to pick a "hidden gem" red wine, there's a good chance he/she may have uncorked a bottle of Umbrian Sagrantino. These impressive, complex and long-lived wines should be known.

Many of you may be asking why you haven’t heard of the wine? Sagrantino, thought to be native to Umbria, has been cultivated since the Middle Ages in this central province contiguous with Tuscany.  Typically used by the monks for a sweet sacramental wine, it fell out of fashion as a dry table wine. By the 1960’s it was was almost extinct until one of Umbria’s most influential winemakers recognized the grape’s virtues for a dry wine. Today, there has been a renaissance---25 boutique producers now grow the grape on about 250 acres. Because production is limited, the wine is not well known outside of Italy. But that may be changing.

Sagrantino is now Umbria’s flagship wine and the appellation of Sagrantino di Montefalco is its premium district. This zone surrounding the medieval town of Montefalco, has the most stringent rules for growing and making Sagrantino. For example, the maximum yields per acre are one of the lowest in Italy. Also, wine must be aged for 2.5 years before it can be released…of which a minimum of one year must be in oak. These wines are so distinctive that in 1992 the Italian government awarded Sagrantino di Montefalco its own D.O.C.Q., a coveted demarcated section of quality.

So how does this wine translate into one’s glass? First, Sagrantino di Montefalco is an enormously full-bodied wine, with huge muscular tannins. When poured into a glass one is immediately taken by its deep inky color---nearly an opaque deep garnet. On the nose, there’s an aroma of blackberries and black plums, with often subtle scents of violets. Next, the flavor profile which ranges from black cherries to ripe blackberries with secondary spice and savory earth characteristics. Both the nose and the gustatory elements reflect its mandatory aging in oak with spices such as cloves, nutmeg, vanilla and even chocolate or mocha. Bottles with some age on them are best so that the powerful tannins are tamed. Decanting several hours before is also helpful to soften the tannic structure. 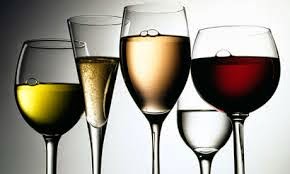 Many factors effect the actual amount of a standard pour

I fairly often receive what I consider “under pours” when I order a wine by the glass.  On a rare occasion, I have even sent the wine back and asked for a standard pour.  The Alcohol, Tobacco, Tax and Trade Bureau defines a single serving of wine as 150cc's (5 fluid ounces).   Go into any upscale restaurant or shop selling stemware and you’ll  usually find a plethora of wine goblets.  Not only are there glasses for every grape variety under the sun, but they come in a vast array of shapes and sizes.  No wonder even the most ardent wine lover can’t measure accurately a serving of wine.

Researchers from Cornell and Iowa State Universities validated this problem in a recent study.   They asked subjects to pour a glass of wine into a variety of different glasses.  The amount differences that were actually poured were noticeably different depending upon the size of the glass, as well as the shape, and even the type of wine.  Here is what the research unearthed:

What’s in a glass?  The study showed even the most sophisticated wine drinkers don’t know.  In summary, when estimating volume people tend to place a larger emphasis on the glass’s height rather than its width, so wider glasses result in larger pours.  Authors of the study also noted that since it is easier to pour into a glass that is being held, that this ease creates over pours.

Next time I order by the glass, I will definitely keep these comments in mind especially for a red wine in a less wide glass that I think is under-poured.

Email ThisBlogThis!Share to TwitterShare to FacebookShare to Pinterest
Wine, Food effect of glass shape on pour, how much wine is in a glass, size matters, size of wine glass, standard pour of wine

Getting High on Low Country Cuisine

Shrimp & Grits is one of the Low Country's signature dishes

I have been in the East Coast’s “Low Country” for the last week with a Wine-Knows tour.  There’s a whole world of flavor packed into the nearly 100 mile area (known as Low Country) between the cities of Charleston and Savannah.  While I had visited both destinations recently, this time I hired local foodie experts and chefs to lead us through a tasting of the best of these two delectable cities.  Here are some fascinating details our group learned about the effect Africa has had on their intriguing regional cuisine.

African slaves had a profound influence on today’s Low Country gastronomy.  Charleston was ground zero for America’s slave industry---40% of enslaved Africans brought into this country came through the Charleston Harbor.  While these slaves were sold around the entire South to supply the plantation industry with cheap labor, many remained in South Carolina and adjacent Georgia.

Slaves were the cooks on plantations and in private well-to-do homes.  They also tended their master’s gardens.  As the African climate was similar to that of the Southern colonies, slaves were well versed in what types of foods grew best in the heat and humidity.  Furthermore, slaves brought some food items with them that were unknown to the colonists.  Peanuts, for example, were brought on slave ships and became an important staple for slaves.  Americans had never seen them and the legumes weren’t well received.  Used as food for the slaves, the poor and for animals, peanuts were only used by the general public after the Civil War.
Below are other foods, synonymous with today’s Southern cuisine, that have slave roots:

~ Black-eyed peas:   widely used in Africa, these legumes were brought on ships with slaves.  Thriving in intense heat and requiring little water, they adapted beautifully to the South’s climate. 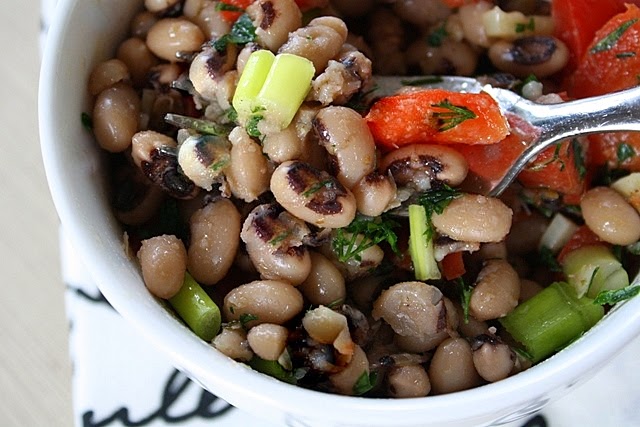 ~ Greens:  A variety of wild greens were prevalent in Africa where they were cooked with meat.  American slaves had meager rations of food and often had to make the most of discards…or turn to wild greens (e.g. collards).  Beets and turnips were grown in most gardens but their greens were thrown away.  Thus, the invention of one of the South’s greatest dishes.

~ Grits:  While grits are pure American (made from dried corn), it is very similar to an African dish that is dried and ground.

~ Gumbo:  Gumbo is a slave word for “okra” (which is native to Africa).

~ Rice:   Evidence indicates that Africans have grown rice since 1500 BC.  Slaves were often stolen from African rice fields to be sold in America where their skills of water management, soil and milling techniques were invaluable to the colonists.  The Low Country’s tidal flow with islands and inlets were perfect of rice growing.  So perfect, in fact, that South Carolina’s economy was second only to Massachusetts prior to the Civil War. 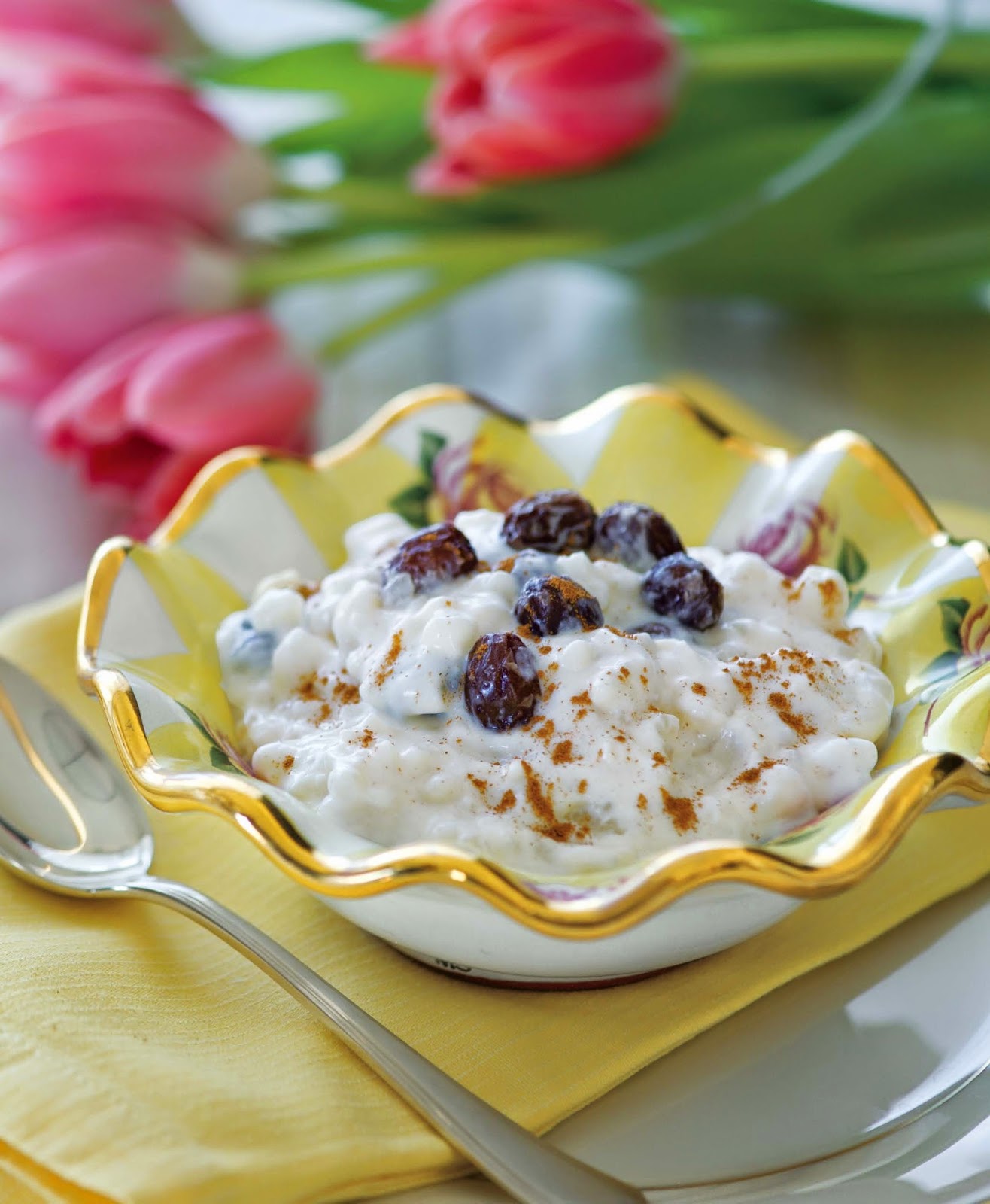 An ethereal pudding made from “Carolina Gold” rice

~ Yams:  These important vegetables were used on slave ships to provide sustenance for the arduous voyage at sea.

~ Watermelon:  Ancient Egyptian tomb paintings show that this fruit has been cultivated since prehistoric times.  Native to Africa, watermelon was used as a source of water in the dessert.  Slaves planted them in the New World to survive the South’s intense heat during summers.

~ BBQ:  Last but not least, tantamount to modern day “soul food” is BBQ.  Slaves brought with them the African tradition of roasting a variety of meats over wood, and then serving them with a thick dipping sauce.