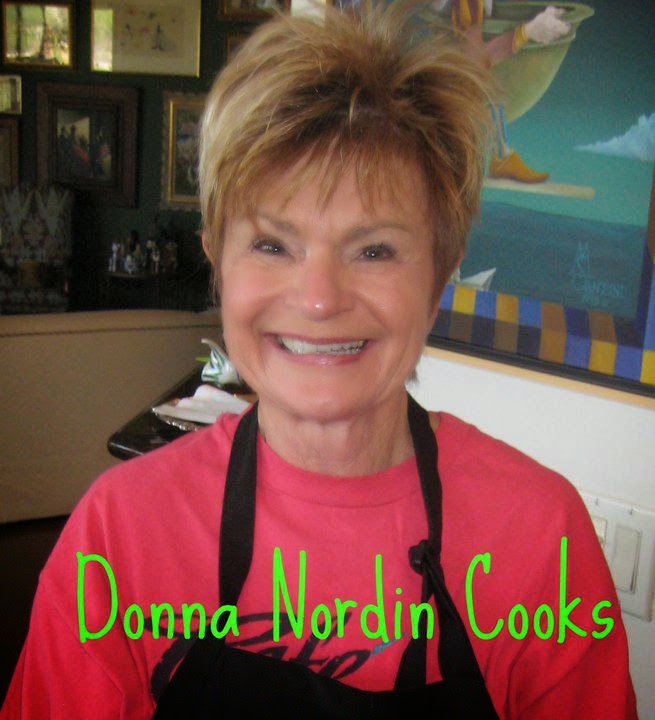 Twenty-five years ago I visited my favorite cousin who had just relocated to Tucson for a new job.  A real bon vivant, he was always up on the latest foodie meccas.  It was my cousin who introduced me to Café Terra Cotta in Tucson.   I instantly became a raving fan and returned every chance I could for this inspiring, unique cuisine.  Terra Cotta was such a success that the chef opened a second restaurant in a swanky Scottsdale location…now I had an option in the Phoenix area, a quick non-stop flight from the Bay Area.

The owner of Café Terra Cotta, also the chef, was a woman named Donna Nordin.  A classically trained French chef (both the Cordon Bleu and Lenotre in Paris), Donna was one of the pioneers of the Southwest cuisine movement.  Her new interpretation of Southwest cooking soon catapulted her to rock-star status.  She was nominated for the James Beard Award and appeared on PBS’ television series the Great Chefs of the West.   Adoring fans demanded a cookbook and she complied with the esteemed Contemporary Southwest:  The Café Terra Cotta Cookbook. 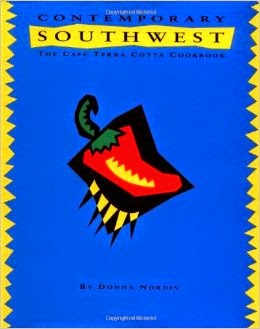 The New York Times and Condé Nast Traveler magazine named Café Terra Cotta “one of America’s 50 best restaurants.”  However, it was another magazine in which Donna scored some major kudos.  Bon Appetit asked Donna to appear in their Christmas issue---she was told that Julia Child would also be featured in the same edition.  In the end, it was Donna’s ethereal chocolate torte that was chosen for the magazine’s coveted yuletide cover. 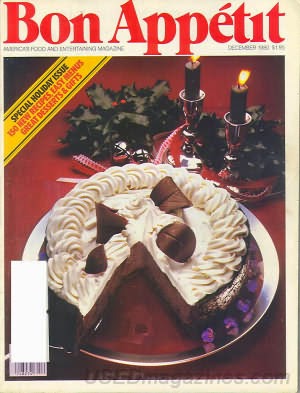 Now that you have been properly introduced to Donna Nordin, I have great pleasure in announcing that I have persuaded her to come to our home for cooking classes on September 19 and 20 (Saturday and Sunday evening).  The menu is still being finalized, however, it will definitely include Café Terra Cotta’s revered signature dish, tortilla soup.  Possible contenders for the entrée will be lamb with a cherry-chipotle sauce, or sea bass with pumpkin seed salsa, or perhaps a grilled duck breast with mole sauce a mango salsa.  Dessert may be her famous cover-recipe chocolate torte, however, since she is a classically trained Parisian pastry chef, it could be an interesting fusion of France meets the Southwest.

The cost of the cooking class, dinner and wines is $110 per person.  Reservations will be taken on a first-come-first-served basis.  The final menu will be posted on our website in March, but for more information in the meanwhile contact me at dunn@wineknowstravel.com, or 760.842.8812. 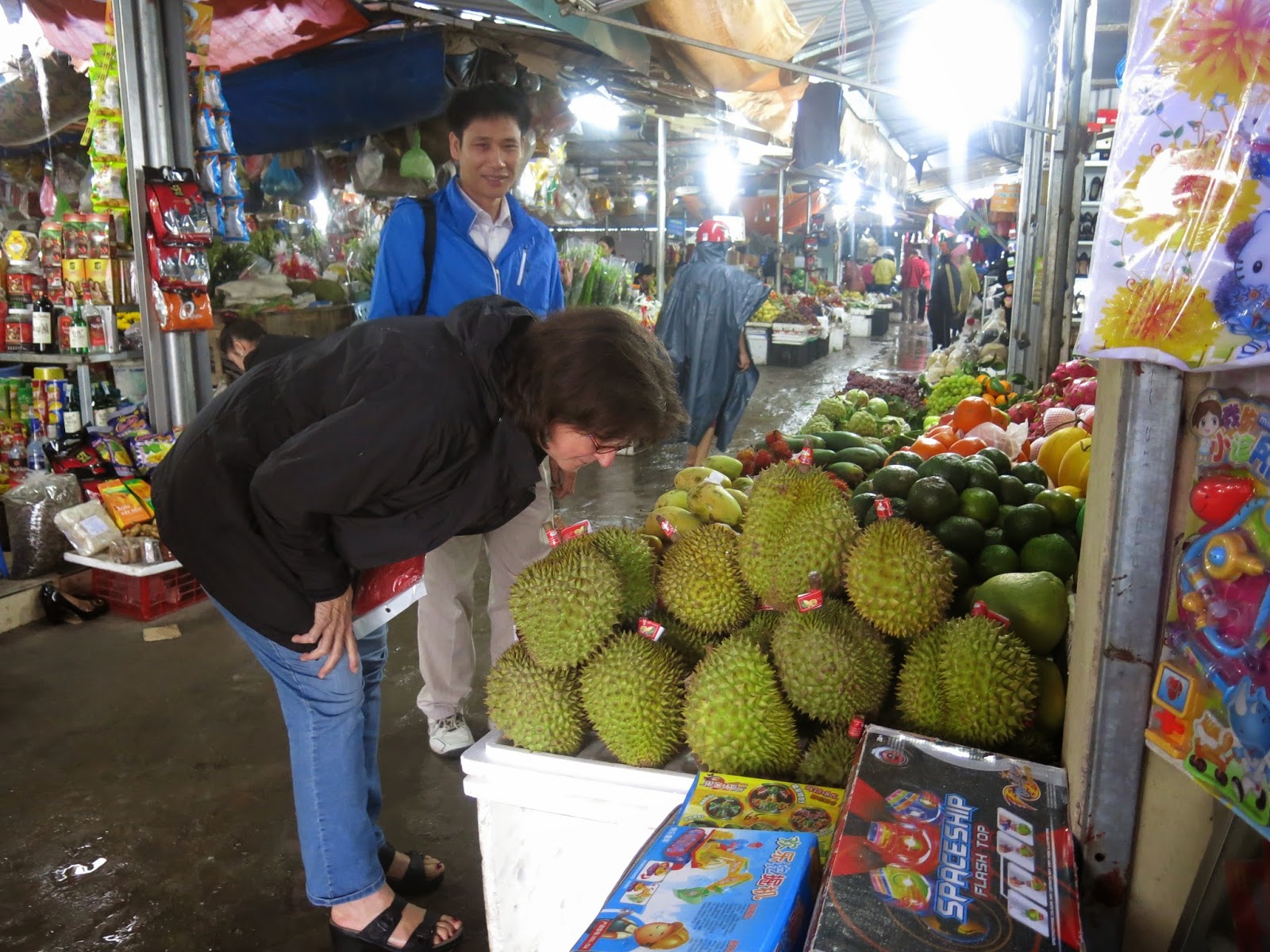 Exotic jack fruits are seen in every Vietnamese market

Five years ago two of my clients of Vietnamese heritage visited us for a weekend at our home near San Diego.  They came baring gifts of strange looking fruit with wonderfully exotic aromas.  One of them was jack fruit…and it was love at first bite.  The two women friends intermingled stories of their families’ escape during the Vietnam War with heart-warming accounts of eating jack fruit back in Vietnam as small children.  While not yet available in traditional supermarkets in California, this fruit is sold in many Vietnamese food stores in California’s urban centers with large Asian populations.

So what is jack fruit?  The flavor is an addictively delicious symphony of pineapple, banana, mango and apple.  While the fruit is used in Vietnamese desserts such as puddings and cakes, I prefer the raw version where I can taste every one of its special notes.  Perfectly ripe jack fruit is like no other fruit you will ever taste.  The texture is also unusual---somewhat fibrous, it is an excellent source of dietary fiber ( as well as high in protein, potassium and vitamin B). Jack fruit is also the largest tree-borne fruit in the world growing up to a ginormous 80 lbs, and as much as a yard in length.

Although Vietnam is one of the largest producers of jack fruit, this delectable edible is widely cultivated throughout Southeast Asia.  Archaeological findings indicate that it was cultivated in India as long as 3,000 to 6,000 years ago.  Jack fruit is also grown in Brazil.

The inside of the jack fruit is very unusual.  It looks to me like something from another planet...somewhat alien.  The first time I saw it sliced open I was shocked.  There's no way to actually describe it. 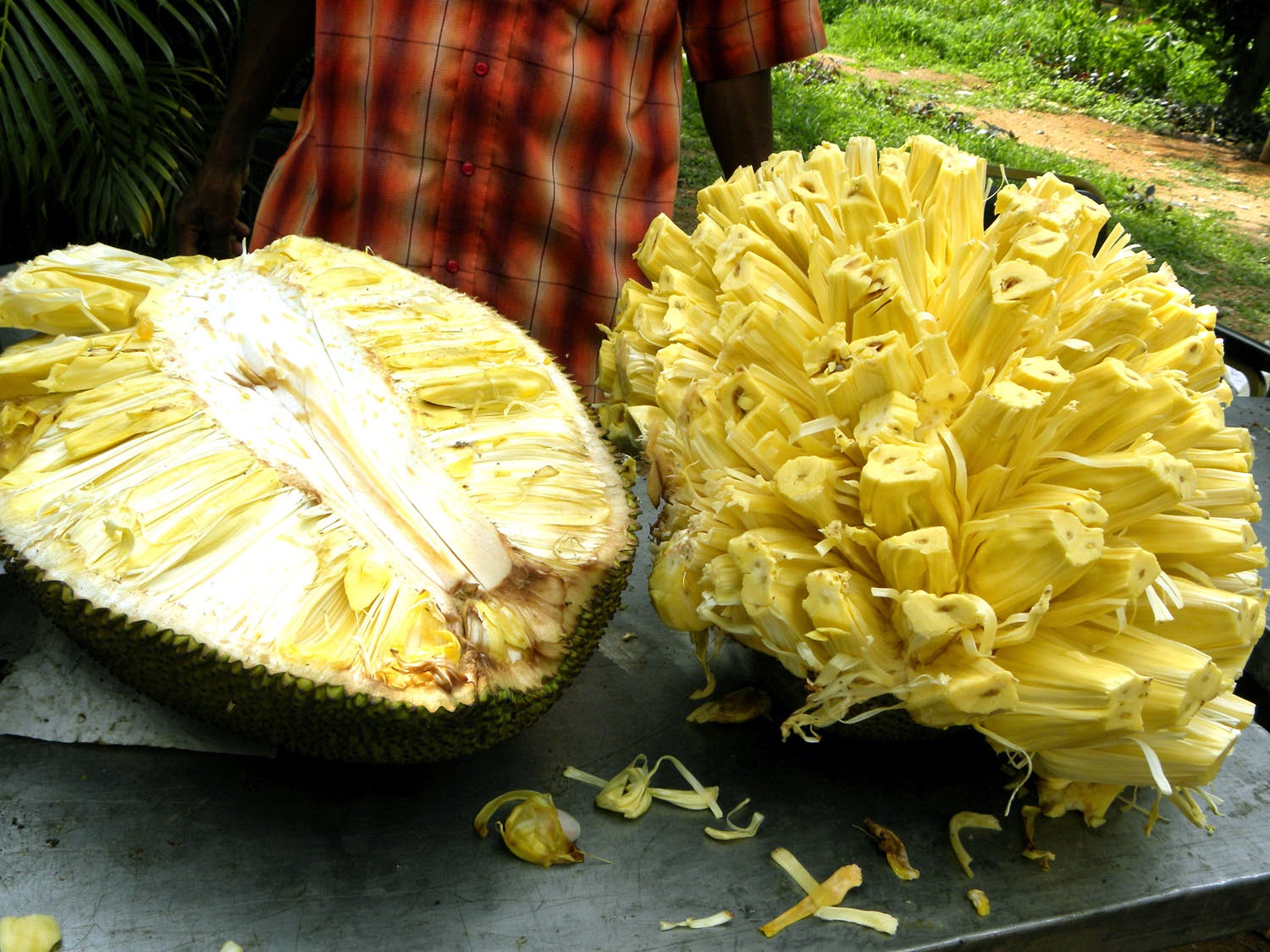 Hard to imagine that something this strange could be so yummy

Those of you who are coming with us on next February’s culinary tour of Vietnam will see jack fruit throughout the country---I even saw a tree growing in the downtown of Hanoi.  Every outdoor market we visited on the 2014 tour had them.  In Saigon there was a woman selling bite-size morsels of jack fruit in a handy take-out container…luckily her small stand was stationed just outside my uber-modern spa hotel located in the heart of the city.  I was a BIG customer of her products for the several days I spent in this fascinating French-inspired metropolis. 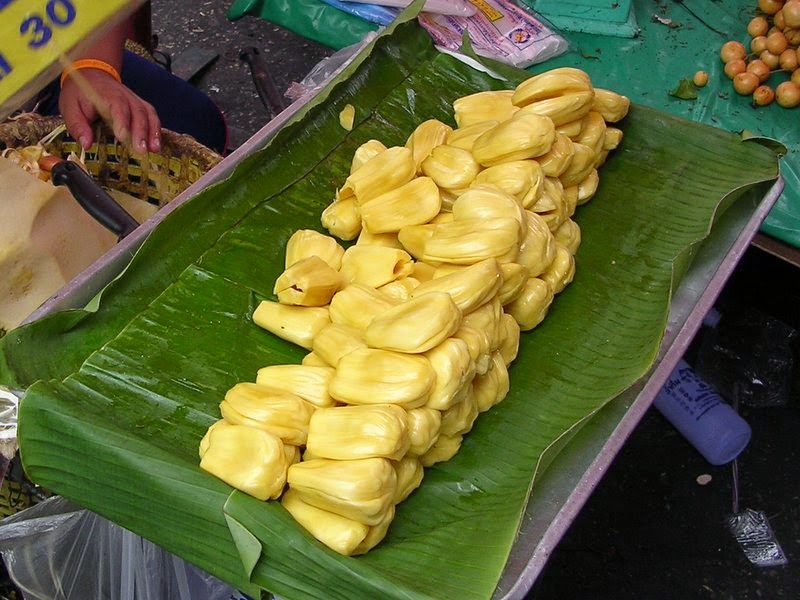 For more information about the 2016 foodie’s tour of Vietnam check out the upcoming trip:   http://www.wineknowstravel.com/Vietnam_itinerary.htm

For a slideshow of the much-loved 2014 Vietnamese tour with Wine-Knows, don’t miss this slideshow of how we ate and drank our way across this mesmerizing country:
http://play.smilebox.com/SpreadMoreHappy/4e4441334d5441774f44453d0d0a 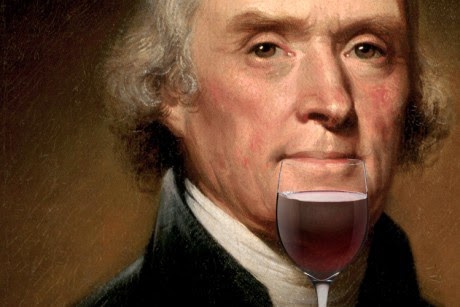 President's Day is approaching.  While most of think of Thomas Jefferson as one of the Founding Fathers of our country, author of the Declaration of Independence, or for his two terms as the third President of the United States, many are unaware that he was also the forefather of the American wine industry.  According to the intriguing book,  Passion:  The Wines and Travel of Thomas Jefferson, author James Gabler indicates that Jefferson was first introduced to wine when he was a law student at Williams and Mary College by the admired Chairman of the prestigious law school.  Records indicate that shortly after Jefferson graduated he started his own wine collection.

Jefferson’s real love affair with wine, however, began after he succeeded Benjamin Franklin as the United State’s Minister to France.   From 1784 – 1789 the newly widowed Jefferson lived in Paris where he immersed himself in French culture, became fluent in French, and developed a keen appreciation for wine.

A fanatical keeper of notes, Jefferson’s records indicate that he traveled to Bordeaux where he visited Haut Brion and Lafite Rothschild (the two most important growers at the time---their wine was also the most expensive). But, Jefferson also admired Burgundy’s wines.  In addition to sending home wine for himself, he ordered Burgundian wine for his colleagues John Adams and George Washington. Jefferson also traveled to Champagne and the Rhone where he visited their top estates.  His touring of great wine districts, though, was not just limited to France---he visited Italy’s Piedmont and Germany’s Rhine and Mosel.

Thomas Jefferson returned to the US where he partnered with an Italian viticulturalist from Tuscany.  Land adjacent to Jefferson’s Monticello was purchased and planted with vineyards.  Today this land is a winery known as Jefferson Vineyards.

John F. Kennedy assembled a huge group of the nation’s brightest and his welcome remarks included, “I think this is the most extraordinary collection of talent, of human knowledge, that has ever been gathered at the White House – with the possible exception of when Thomas Jefferson dined alone.”  Jefferson was not only America’s first wine connoisseur but the founding father of an American wine industry that is now a significant player on the global wine stage.

President’s Day is around the corner.  Here’s an early toast to Thomas Jefferson!

I’m just returning from January in Cabo San Lucas, Mexico.   I rented an apartment and did something I have never done---I did not cook one lunch or dinner for the month.  I grew up on Mexican food and think of myself as somewhat of an expert, so I made it my personal mission to seek out Cabo’s best.  Here’s what floated to the top of my list: 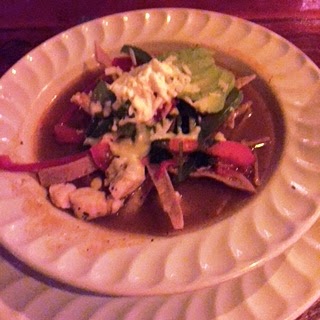 Tortilla soup like no other you have ever had

Hands-down the winner was Misiones di Kino.  This place rocked on food quality, atmosphere and service.  If you want authentic cooking, Mexican charm and a lovely garden setting, this is your place.  Do not miss their complex tortilla soup (the best I have ever had),  and the sublime flan (a yummy mixture that tasted somewhere between a typical light flan and a cheesecake. According to the owner, this special recipe has been in his chef's family for generations).  Their chile relleno was also a standout, and margaritas were one of the best in town.  Can’t praise this place enough.  A real gem.  http://www.misionesdekino.com/ 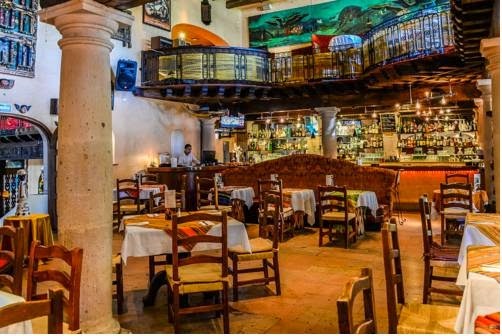 Tropicana was a real fave

A foodie-in-the-know friend of mine recommended Tropicana to meet for dinner.  Knowing her, I knew the place would have good food, but what awaited me was one of the best surprises I've had in a long while.  Located just off of San Jose del Cabo's historic main square, Tropicana was the most atmospheric spot I've dined in Baja California.  I felt like I had stepped back to elegant 1920's supper club in Manhattan, but in the style of an old hacienda. It's swanky, it's sexy and it's electric...all in an understated way.  All 6 persons who I dined with loved their classical Mexican cuisine, and I particularly enjoyed the table-side service on their delicious caesar salad.  A definite do not miss.   http://www.tropicanainn.com.mx/ 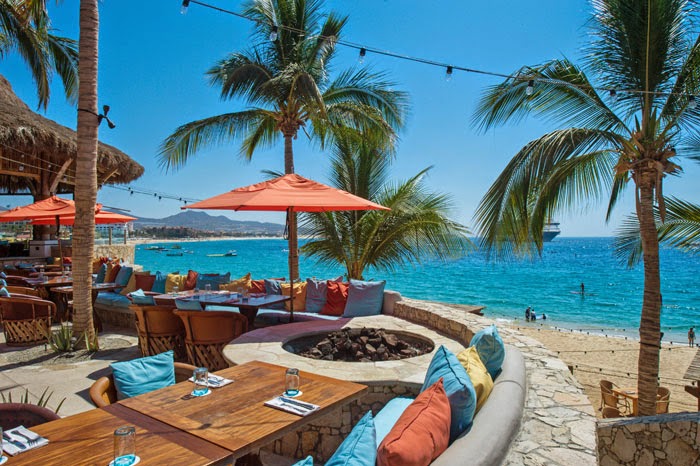 This one was a no-brainer:  Hacienda y Cocina.  There’s no better place in town to watch the sunset than in this quietly elegant and super sexy beachside spot.  Be sure to reserve for a table on the outside terrace.  My favorites were their shrimp (Camarones Baja) and their marinated grilled skirt steak (Arrachera) served with the world’s most scrumptious avocado salad.  The drop-dead gorgeous setting, refined atmosphere and excellent service more than justify the slightly higher prices.  Actually, all considered, it’s a bargain.
http://haciendacocina.com/ 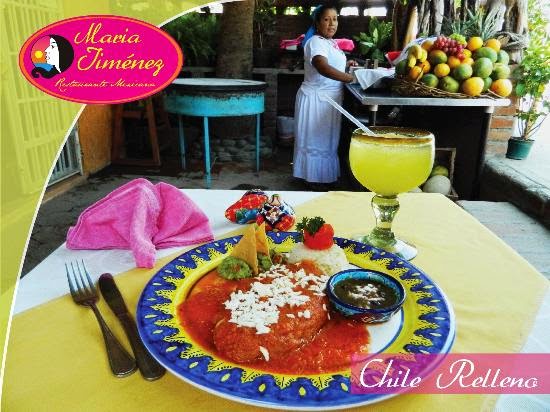 Don't miss Maria's
And the Oscar goes to…Maria Jiminez!  Maria’s former tiny restaurant was so successful that she recently expanded into the corner building next door.  I love this place.  It oozes character…from the colorfully dressed woman making handmade tortillas right in front of you,  the attractive local art on the walls, and the beautiful handmade ceramic plates that food is served on, it’s all a good-vibe.  The food is very good with the chile rellenos being the star of the show.  My only complaint is the margaritas…strongly recommend you opt for the sangria or one of their beers.
https://www.facebook.com/mariajimenezcabo

Best Hole in the Wall 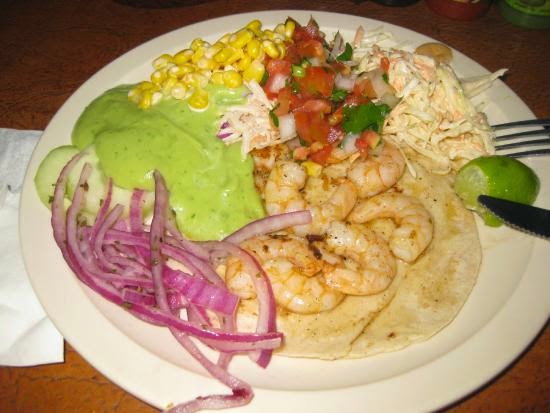 Los Claros has 3 spots in Cabo, an attestation to its immense popularity.  There’s one in the Wyndham Hotel complex, however, my beloved spot is its simplest place located across the street from the Paradiso shopping center atthe end of the Marina, on the town’s main drag.  The shrimp tacos were the best in town, and the salad bar for the taco toppings was an added bonus.  Best value in town.
https://www.facebook.com/pages/Tacos-Los-Claros/178134578877626