What’s on Your Menu? 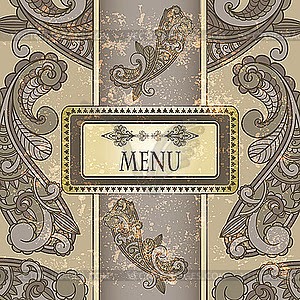 There’s something about the end of one year and the beginning of a new one that causes me to pause and reflect.  One of these year-end contemplations is often about my favorite meals of the year.  This time, however, it came in a different form:  what would be on the menu of my last meal?   Here’s my list:


More importantly, however, than what’s on the menu is WHO I would be dining with.  A reminder for all of us:   we need to break-bread together with people we love more often…and bring out those old vintages now. 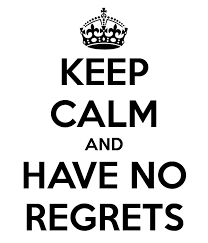 It’s that time of the year for contemplation… all of the shoulda, woulda and coulda from the last 12 months.  A year or two ago the Wine Spectator had an article in which the author lamented about his greatest wine regrets.  Here’s my list of wine roads not taken.

I wish I had known Gruner Veltliner earlier as it’s my latest darling varietal.  Yeah, I know it’s hard to pronounce, but as hard as it is to say, it’s the inverse wonderful to drink.  While I tried it 35 years ago on my first trip to Austria, it never hit home until this year when I had some terrific GV in New Zealand.  Now I can’t get enough of this fruity (think berries, citrus & stone fruits) & floral white dazzler native to Austria.

I wish I had drunk more wines from Bierzo, Spain.  I’m currently working on the 2016 Wine Knows tour to Spain and Portugal and it reminds me of how much I love these wines.  Made from the Mencia grape, these drop-dead gorgeous, complex reds from Spain’s northwest should be on every wine lover’s radar.  For quality/price ratio, Bierzo’s Mencia knocks it out of the ballpark.

I wish my last 35 years of serious wine drinking had all been done blindly.  In my ideal world, all wine should be consumed without knowing what it is or how much it costs. Too many of us are persuaded by the brand name, the price, or some other factor that has no relationship (necessarily) to what’s in the bottle.  Taste it blind…then decide if the quality warrants the price.  Taste it blind and you may be very surprised as to what you find.

I wish Riesling was not such a step-child.  I notice several people avoiding this varietal…probably because of their preconceived ideas of a sweet wine.  The Rieslings I love are bone dry.   True, older Rieslings are often acquired tastes due to their petrol profile, but when correctly paired with food, this varietal is an real unsung hero for most Americans.

What wine roads should you take in 2015?  What’s on your wine bucket list?  What are your New Year’s Resolutions related to wine?

Wine Trivia That May Surprise You

With holiday parties rapidly approaching, here are some tidbits for cocktail trivia with fellow wine lovers:

How many varieties of wine grapes exist in the world today?
>10,000

What grape varieties are the most planted on the globe?

How many bottles are in a barrel?
The standard barrel contains 300 bottles of wine.

What are the culprits that can taint a wine?


There are 2 that can especially wreak havoc.  Brettanomyce (aka “Brett”) is a spoiling yeast that causes barnyard smells in wine.  It can destroy an entire winery’s inventory as it’s difficult to eradicate.  The other is a chemical compound called TCA.  This culprit is often found in flawed corks, thus when TCA ruins a wine the wine is referred to as “corked.”

The 10 Best Things I Ate & Drank in Vietnam

The month of December always puts me in the mood to ponder my year in review.  Today, I’m thinking about the many pleasures I had during 2014 in Vietnam.  In particular, I’m remembering the glorious culinary delectables of this exotic country.  Some of my favorite meals of this entire year were in Vietnam.  Here’s a recap of what floated to the top of my Vietnamese best: 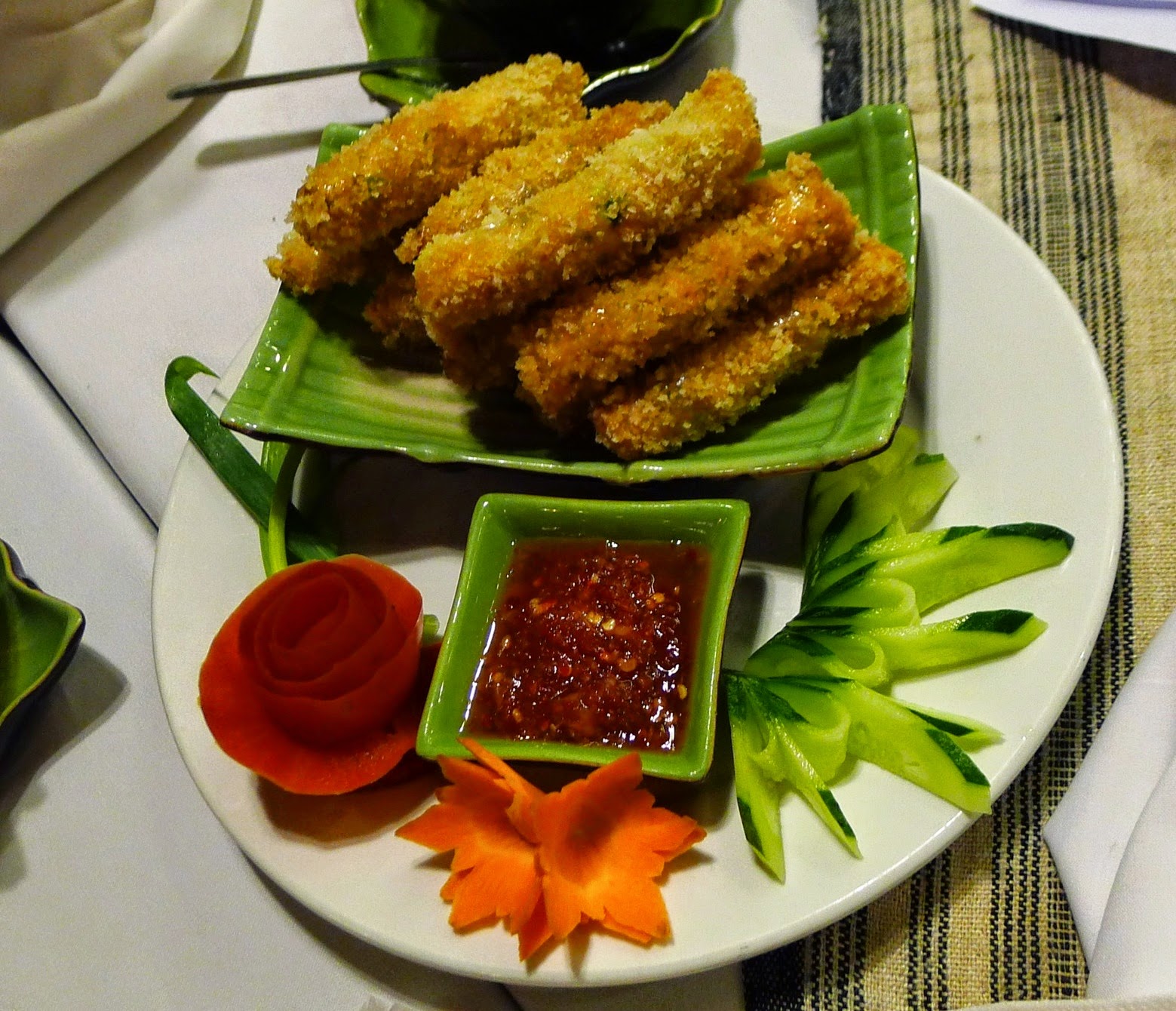 Chicken egg rolls with a crunch

1. Numero uno has to be the panko-crusted egg rolls we made during a cooking demo at one of my favorite restaurants.  I’ve made these several times since I’ve returned and I always hear the exact same words from my guests:  “This is the best egg roll I have ever eaten!” 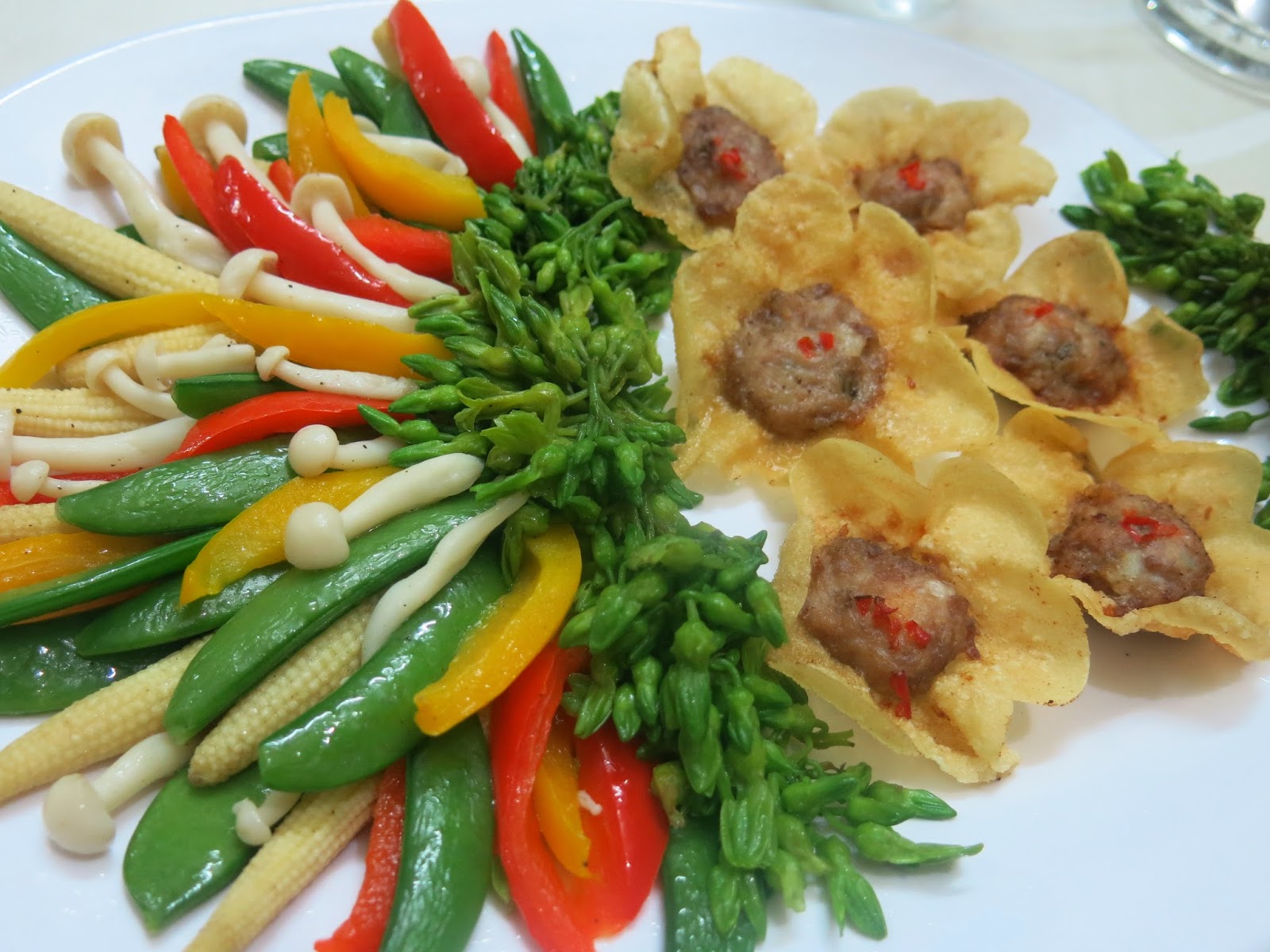 2.  A close second is the salad made with tea leaf flowers that we had in the home of one of Saigon’s master fruit carvers.  The salad was delicate but had an amazing depth of flavors and textures. 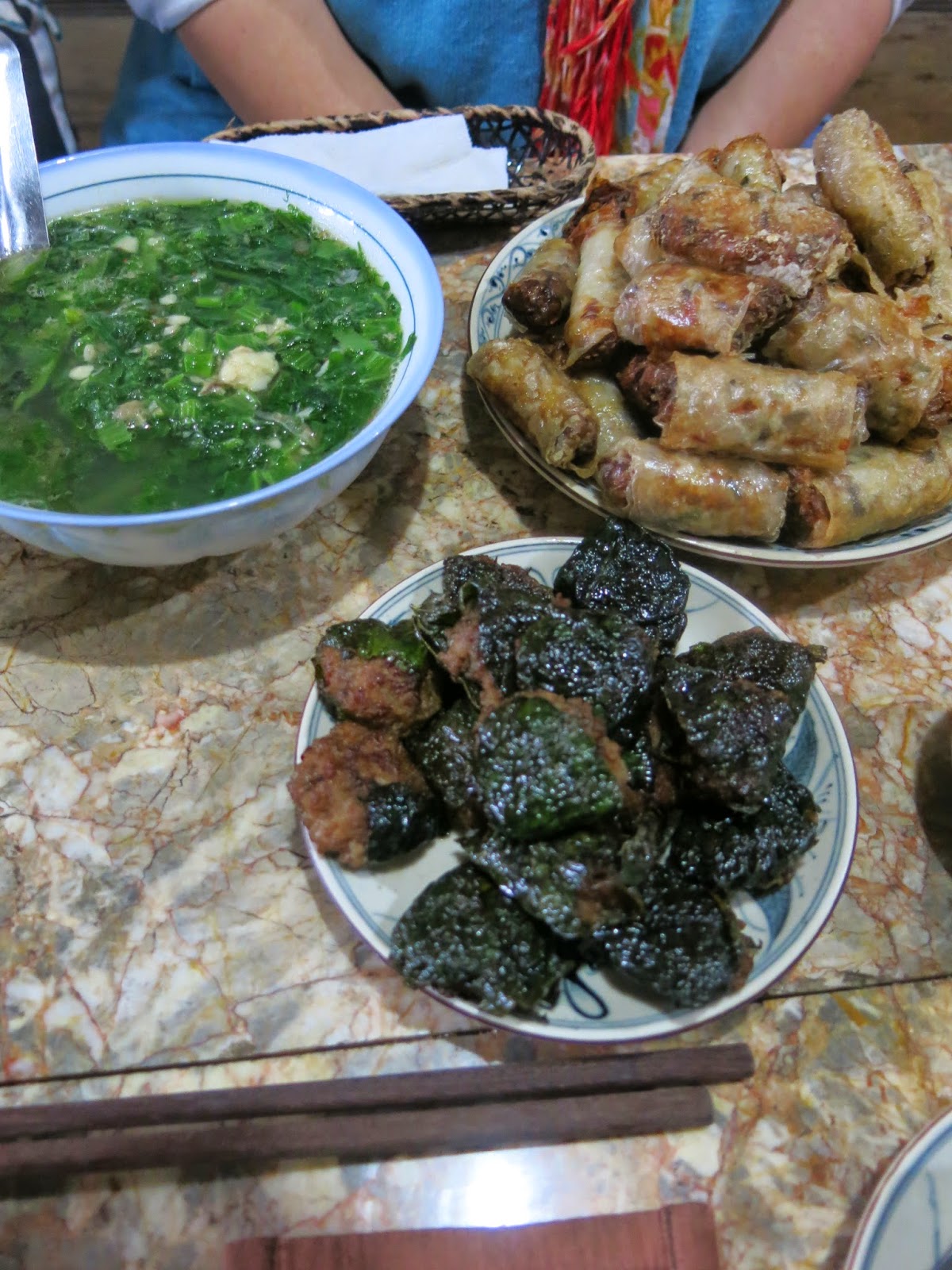 3.  Jockeying for top honors with the two above is the minced beef cooked in a beetle nut leaf.  While it looked like a stuffed Armenian grape leaf from the outside, the beetle nut version was much more complex.  Adding to the complexity, no doubt, was the fact that it had been grilled over wood.  Definitely a winner. 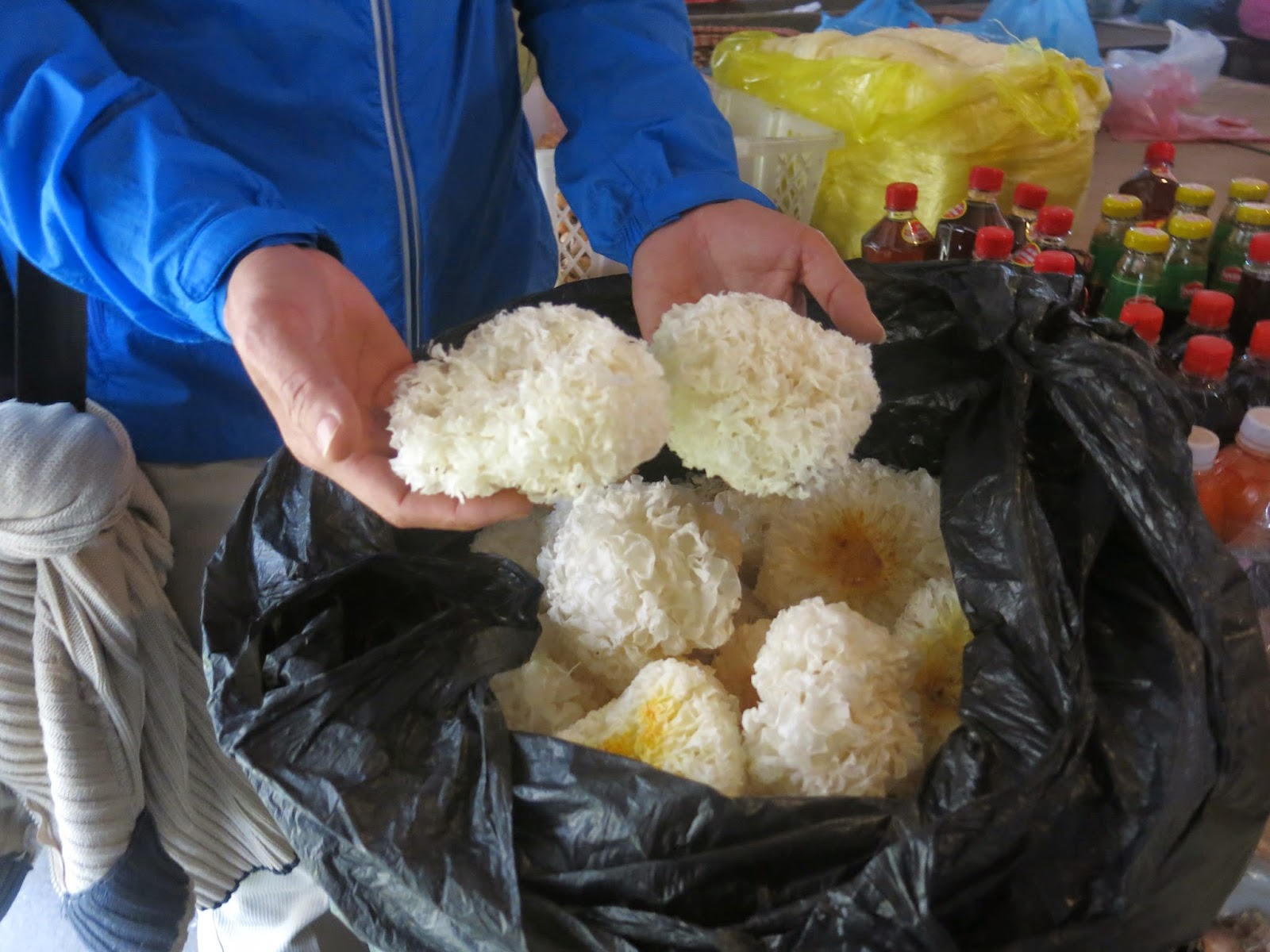 4.  Stir fry vegetables with wild “snow” mushrooms had me at hello.  I was so taken by the taste of these exquisite mushrooms that I immediately had our driver transport me to the nearest market where I purchased a suitcase full of the dried version to bring home.  Let it snow, let it snow! 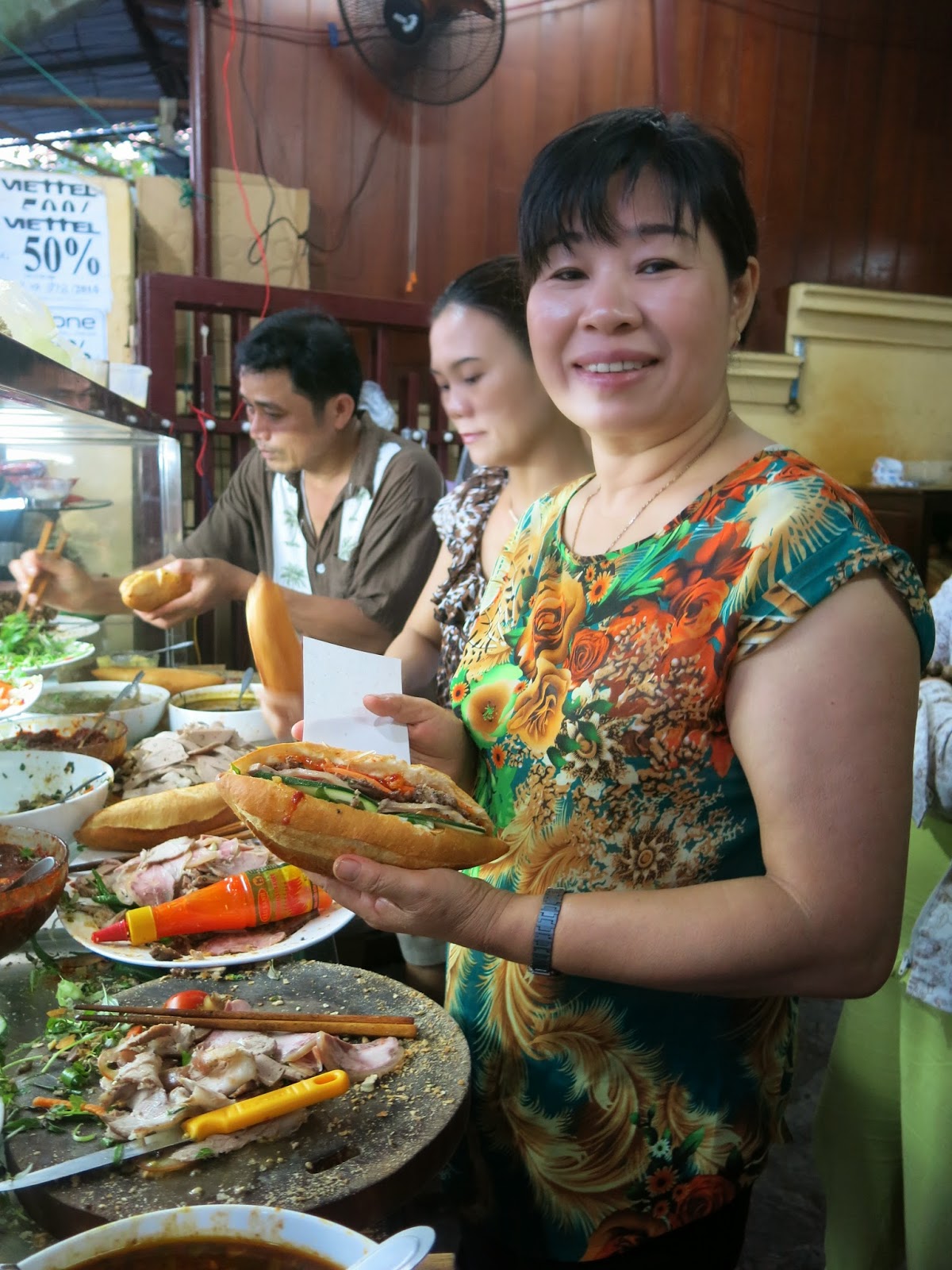 I ordered "the works," a melange of meat pâté, duck, and super fresh veggies

5.  I’m not necessarily an Anthony Bourdain fan, but when I watched his television show on his best “banh mui” in Vietnam I was intrigued as my Vietnamese friend in America had always spoken so fondly of these street sandwiches made on a baguette.  Bourdain nailed this one.  I ate one 2 days in a row at the place he recommended.  It was exquisite. 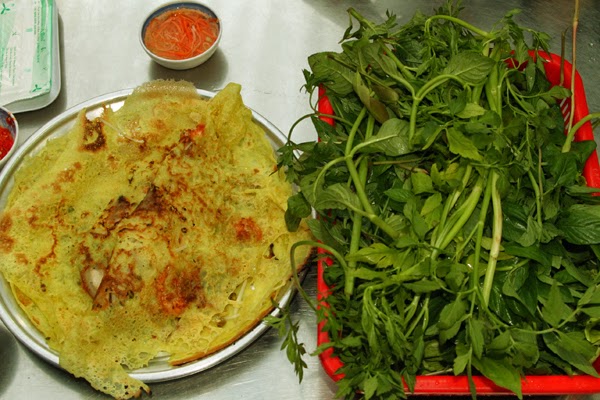 6.  While we ate at some of Vietnam’s noted culinary shrines, we also ate with a local foodie on a tour of her favorite street foods.   This place was only reachable by foot as the streets are too narrow for cars.  We sat in the middle of the street on plastic chairs at small tables that could have easily been in a kindergarten classroom.  Their specialty was banh xeo, a fusion of the French crepe with an Chinese egg fu yung.

Royal duck was served in this palatial restaurant

7.  Royal duck is one of the most famous dishes of Hue, the former capital of Vietnam during the time it was ruled by Emperors.  It is so named because it was created by the Emperor’s chef for one of the many royal feasts.  The only way to get the recipe was to bring a group here and have a cooking class, so that is exactly what I am doing in 2016. 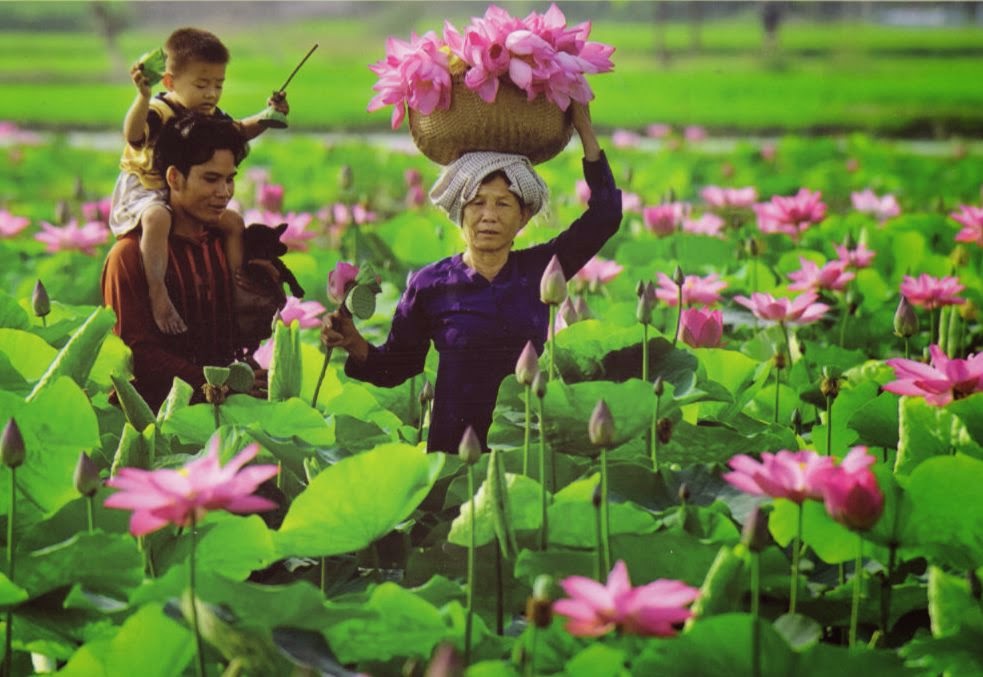 Lotus flowers are used in many food dishes in Vietnam, as well as tea

8.   My Vietnamese friend from Los Angeles often speaks fondly of lotus tea…it’s apparently one of the few things she can't find imported into the US.   Although I didn’t know what it was when it was served to me in a very upscale restaurant, but after my first sip I knew it was special.  Upon inquiring, I found out it was lotus tea.  I bought a year’s supply to bring home. 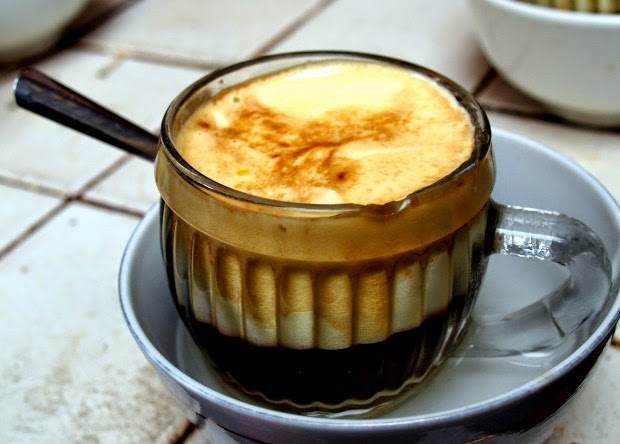 Think of it as the world's most decadent cappucino

9.  Our foodie guide in Hanoi insisted on taking us for the city’s famous egg-cream-coffee.  It sounded hideous to me and I asked for other options.  Luckily, she wouldn’t budge.  This could have been served in France in a Michelin three star restaurant and everyone would have raved.  Definitely rock-star status, and it will definitely be on the 2016 tour. Coffee is very popular in Vietnam thanks to the French occupation

10.  Last but not least is Vietnamese coffee in general.  I was stunned on the first morning of arrival in the country when I found my group in the breakfast room totally enamored with their coffee.  It took one sip to win me over.  And, yes, I brought home 5 pounds of it but it didn’t last long.  Luckily, because of the huge Vietnamese population in California, there are several stores that I can buy it.  (BTW…every morning I start the day with a cappuccino made from Vietnamese coffee.)