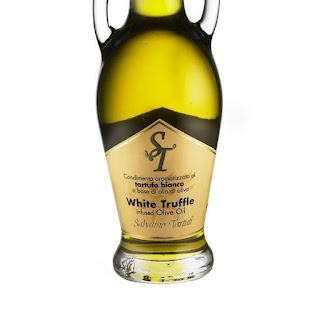 Real Oil says "Truffle Infused"
Every year when I’m in one of my “must have” purchases is white truffle oil.   It’s becoming increasingly difficult (and super pricey) to find out of its home region, .  I was recently in (300 miles east) and couldn’t find a single bottle.  There was plenty of black truffle oil (from , a few hundred miles south).  The black was tempting as was less then half the cost of the white, but it’s also less than half the aroma and half the taste.  I decided to pass.
When I came home I began an Internet search on white truffle oil.   I knew to avoid anything from China (yes, they're producing truffles...if you could possibly call them that---yuck!).  I discovered a plethora of both white and black truffle oils with wording such as "Truffle Essence" or "Truffle Aroma."  Mama mia…imagine my surprise when I came across an article in the New York Times talking about knock-off truffle oils.  If it says "Truffle Essence" or "Truffle Aroma" it is SYNTHETIC, made in a laboratory from chemicals that mimic the smell of the glorious tuber.

Buyer Beware!  If you’re shopping for truffle oil be sure to carefully inspect the label to make sure it says “infused with white truffles.”  Don’t even think about labels that have “essence” or “aroma,” as their imposters made with 2,4-dithiapentane in some lab.

Wine Knows Travel is attending ’s Truffle Festival this October and I intend to load up on the real thing.  Nonetheless, I intend to eyeball every label and buy from one of the region’s reputable truffle firms.
Posted by June Forkner-Dunn, PhD at 1:00 AM 2 comments: 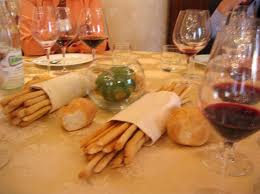 The breadstick was created in the 14th century in Northern Italy by a baker from the district of Piedmont, famous for its truffles, as well as its Barolos and Barbarescos.  The Piedmontese bread stick (called a grissini) is the Rolls Royce and Bentley (or should I say Maserati and Ferrari?) of all breadsticks.

It was not until the 1960’s that grissini became an everyday treat in Piedmont.  Made by hand,  they were often reserved for special occasions such as a gift for a hostess, or a present for a mother after the birth of a child.  Napoleon was even charmed by grissini, sending them back to Paris with instructions for the French bakers to re-produce them.

Grissini are the first things you see at the table when you walk in to a ristorante in the Piedmont area.  They’re at least 2 feet long and they’re placed down the middle of the table as an edible center-piece.  Forget store-purchased grissini…the only way to go is with one that has been  made that day, either by the ristorante or the local baker.  Don’t even consider touching those that are not made by hand.

Today, you’ll find grissini made throughout Italy with everything from sesame seeds to rosemary.  The best, however, in my opinion are the ones simply from olive oil, flour, yeast, salt and a little water.  The better the olive oil, the more flavorful the grissini.

If you’re coming with us on the Truffle Tour in early October, you’ll see them being made in our visit to a famous bakery.

Buon appetito!
Posted by June Forkner-Dunn, PhD at 1:00 AM No comments: 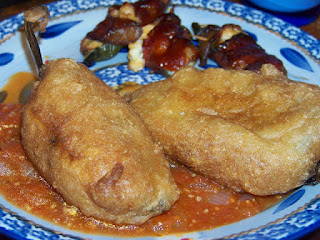 I’m leaving shortly for a wine tour to and I have to get my “fix” of Mexican before departing.  Tonight I’m dining at El Callejon in downtown .   I grew up on Mexican food in ’s agricultural central valley, an area replete with Mexican immigrants.  Forget mashed potatoes and pot roast—my comfort food was (and is still) chile rellenos, guacamole and home-made chips with pico di gallo.
El Callejon has the best chile relleno I may have ever tasted, which is saying something as I base all restaurants on this classical standard.  (Note:  there are two chile rellenos on their menu---one of meat and one of cheese---the cheese one is ethereal!)  Freshly fried tortillas, guacamole and home-made salsa of fresh tomoatoes, onion and cilantro (pico di gallo) are also criteria on which I judge a Mexican restaurant.  This place gets a definite thumbs up for all of these items---and that’s something considering this is the worse time of the year for tomatoes.  Their pico di gallo still rocks.
Another benchmark for measurement at Mexican eating establishments is a margarita. ( I actually was sent to El Callejon by a local when I asked where was the best place for a margarita.)  You can probably imagine that being in the wine business I am a hard one to please on margaritas.  If a restaurant tells me their’s is not made from freshly squeezed limes I’m immediately out the door.  El Callejon's margaritas are sublime, but that’s a no-brainer as the restaurant has a tequila bar featuring >200 tequilas.
Another thing I love about El Callejon is the outside dining.  Unless it’s raining, dining year around on their outside terrace is possible (heaters take the edge off during ’s mild winters.)
Time your visit on Monday-Friday during happy hour when margaritas are half price in the bar area, or on the terrace immediately outside the bar.  If you decide to come on a weekend, there’s an authentic Mexican combo that plays mariachi-style classics.    (BTW…there is a second El Callejon in Encinitas).
http://www.el-callejon.com/
Posted by June Forkner-Dunn, PhD at 1:00 AM No comments: 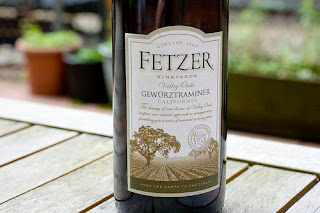 Some of you must be saying “<$10---your’re joking right?”   Believe me, Fetzer’s Gewurztraminer is no joke.  And, at less than $10, it’s one of the best buys I know.  Moreover, it’s widely available in many supermarkets and Bev-Mo.
Many folks avoid Gewurztraminers (some because they can’t pronounce the name---others because it’s not been paired with the appropriate food.)  First, this glorious, highly perfumed grape is pronounced  guh-vurts-tra-mee-nur.  Second, although bone dry in ’s district, the wine in is most often made into a sweet wine.  Fetzer’s version has just enough sugar to make it work beautifully with Asian food as the small amount of sugar helps tame the spices and heat.
Gewurztraminer is a treasure trove of lucious apricot, pear and honey aromas and flavors, mixed with floral notes such as roses and gardenia;  there's also cinnamon and/or clove typically in the taste.  Fetzer’s version throws in some pineapple and ginger nuances, perfect for most spicy Asian cuisine.  (BTW…Gewurtz means “spicy” in German).
Tonight we're having Fetzer's Gewurztraminer with yummy Vietnamese-style ribs and an Asian coleslaw...should be a match made in heaven.
Posted by June Forkner-Dunn, PhD at 5:11 PM No comments:

The French have long had a love affair with wine, but this incident may just take the gateau for fraud in a French supermarket.  Recently a young woman near was caught switching the bar codes on one of ’s priciest wines (Château Pétrus) from $3,300 USD to a mere $3.50.  She was immediately arrested.  The large supermarket chain now has placed all of their expensive bottles in a locked cabinet that can only be accessed via the store manager.


This isn’t the first time that scammers have tried to pull a fast-one with the highly esteemed Château Pétrus. A couple of years ago the wine world came to a grinding halt when it was discovered that one of the prominent auction houses had allegedly sold bogus Pétrus.  Billionaire wine collector Bill Koch (who has a 40,000 bottle collection of the world’s top wines), has filed a law suit over counterfeit  wines he was sold that supposedly belonged to Thomas Jefferson.


Several years ago my husband and I were gifted with a bottle of Château Pétrus from one of our clients who lives in Russia.  He's a man with a great sense of humor---and he roared with laughter when he told us that he had printed the Pétrus label from the internet and placed it on a $20 bottle of California cab.  It looked very real.  We still have the bottle and often show it to oenophiles as a buyer beware story. 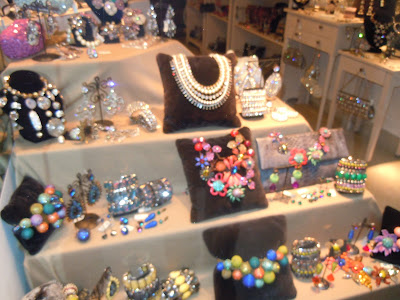 If there’s one shop NOT TO MISS among the bazillion stores in , it’s gotta be Gloria Astolfo.  This swanky costume jewelry emporium offers a fabulous array of baubles that would satisfy any Doge’s wife, Contessa or Principessa.   Opened in 2005, this jewel box caught my eye in 2007.  It’s been my first stop in ever since.

Although tiny, every inch is filled with beautifully displayed jewels, all shown in color groupings.  In 2010, when I was in the city for a week, I made a bee-line to the turquoise section and purchased a pair of large dangly earrings ($225).  They were too big for my small frame, so the store took them apart and made two separate earrings for me---one a simple small piece…the other a perfectly proportioned dangle for my 5 foot size.   It took them 2-3 days, but there was no extra charge.

This recent visit I took my friend.  There was a glorious new collection of coral pieces (their coral comes from ’s .)   Prior to entering my friend insisted, “I’m not spending a Euro more on this trip.”  She walked out with 3 killer pair of earrings.  I behaved, and only allowed myself an indulgence of one item…another pair of show-stopping earrings (I have worn them twice in the last week that I’ve been home----and both times people have approached me about them).

No photographs are allowed in the store for fear of their unique designs being ripped off, however, once outside the window displays are fair game.  All pieces are made at their nearby artisan workshop from semi-precious stones or Swarowski crystals.  The store is open daily from 10-8, accepts credit cards, and offers Tax Back breaks for purchases over $200.

Gloria Astolfo is located a minute’s walk from the back of St Mark’s square on the main routing to La Fenice Opera @ San Marco 1581.