What I Learned this Year 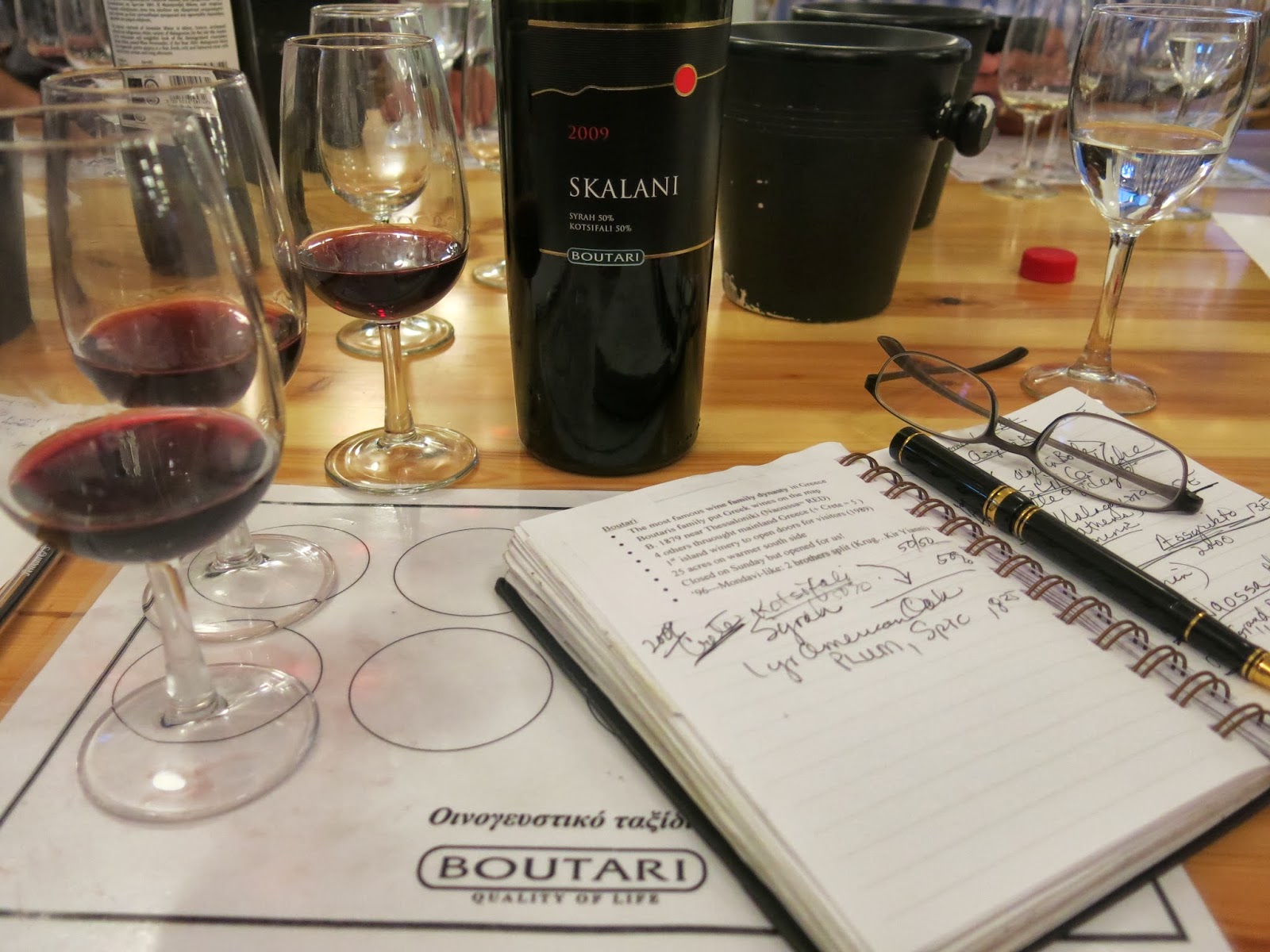 My first four learnings of 2013 were due to the exciting DNA work by scientists studying the origin of grapes.  However, there are several other cogent details I’ve picked up in the last 12 months.  Here’s my top 10 list, checked it twice…and yes, I’ve been both naughty and nice.

1. Cabernet Sauvignon is a cross between two grapes; Cabernet Franc is the father, Sauvignon Blanc is the mother.

2. Chardonnay is a cross between two grapes:  Pinot Noir is the father; Gouais Blanc is the mother.

3. The first Chardonnay grapes came from the Burgundy district in France.

5. New Zealand, while known for Sauvignon Blanc, is now focusing on Pinot Noir…and they are excellent.

7. While blending is the hallmark of Champagne, there are >400 cuvees blended to create Veuve Cliquot.

10. Saltiness in wine is due to the minerality of the soil
in which the grapes are grown. 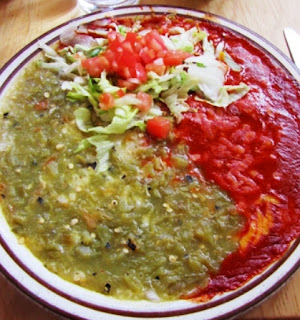 “Will that be green or red, sir?” I overheard the waitress ask the gentleman sitting at the table next to me.  “Hmmmm, I can’t decide,” he said.  “Okay, let’s make it Christmas,” he replied.   Christmas?  I thought to myself.  It was September in Santa Fe, so what was with the reference to the holiday?

I scoured the menu and it was peppered with numerous meal selections offering green and red chiles but I did not see any reference to “Christmas.”  I ordered the Flat Chicken Enchiladas…a kind of local lasagna made with corn tortillas.  The waitress arrived, I gave her my order and on cue I received the same inquiry the gentlemen sitting next to me had received.   “Green or red, sir?”

I stared up at her blindly. “Excuse me?” I stammered.  “Green or red chiles on the enchiladas---which do you want?  Or, would you like both?“  “Both?” I answered with a question because I wasn’t quite sure.   “Okay dear, in the future, if you want both, just say Christmas.”  So there is was, the chile code deciphered; green and red chiles served together was a St Nick’s specialty.  And a culinary Christmas it has been since this remarkable chile awakening experience thirteen years ago.

Although there are some two hundred varieties of chiles, my favorite is the New Mexico Green Chile, about 4-6 inches long.  Picked green in their “unripe” state (before turning red), the skins are tough.  They are often roasted which makes them easier to peel, but the most important reason for charring them is that it imports a delicious smoky flavor.  Tagged with numerous names like Big Jim, Rio Grande and Sandia, these chiles have a heat index ranging from mild to moderate or hot.  Throughout New Mexico they are offered with everything from burgers, pizzas, bagels and French fries…to haute cuisine worthy of a Michelin star.

Which wines pair best with New Mexico’s chiles?  Wine pairings with spicy recipes follows a rule of thumb that the spicier the food the colder and sweeter the wine.  Wines with lower alcohol and higher acidity counteract the burning sensation of chile.  This makes both Riesling and Gewürztraminer good choices.  Another wonderful option is a sparkling wine which pair wells with the heat of the moment due to its generally high acidity.   If you are thinking red, less oak & less tannins are desired.  Barbera or Beaujolais, along with Zinfandel will all pair nicely with spicy dishes.

You can find New Mexican chiles in your supermarket frozen foods department.  If frozen isn’t your thing, you may want to consider a visit to this land of beautiful high desert panoramas, extraordinary culture and captivating chile-based cuisine.   Can’t decide on when to visit?   Keep in mind Christmas. 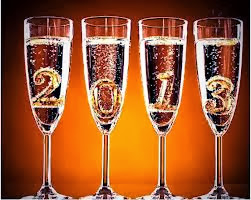 This year’s best-of-the-best is filled with many wines that I have known in previous vintages, but there are also several that I’ve never tried, along with some that I never knew existed.  The wines, ranging from $25 - $150,  represent four continents.  While I have had many wines this year that cost >$500, they don’t appear because the value for me just wasn’t there---and, to be honest, the $30 Chilean wine of Altair may have beat many of them in a blind-tasting.  I have included only wines that are available in the US.   (While I tasted many over-the-top wines around the globe, regrettably, several are not exported to the US and thus were not included.)

The list appears in alpha order by country.  All wines represent significant value considering their quality.

·        Stonestreet Terrace Ridge 2011.  A blend of Semillon and Sauvignon Blanc, this
classical white Bordeaux pairing had me at “hello.”  I believe it’s the first time the
winery has produced it, but I do hope it’s not the last.  Thank you to our
neighbors, Lynne and John (both of whom are in the wine business), for
introducing us to this beautifully crafted wine. ($35)

·        Altair Sideral 2009.   Altair produces only 2 wines, both of which are red Bordeaux blends.  Grown on the foothills of the Andes by a well-known French wine family, these wines are stunning.  For the ’09 vintage, Sideral (their less costly one), stole the show.  In fact, I thought my glasses had been switched but the winemaker confirmed that the less expensive wine was my favorite for the first time in the last 9 years!  A real steal.  ($30)

·        Maquis Franco 2010.  Maquis produces stellar, high value wines.  This one is 100% Cabernet Franc (thus, it’s name).  The vines were planted >80 years ago by the winemaker’s grandfather who always thought that his land was perfect for the varietal.  Lafite-Rothchild’s just-retired winemaker was the consultant on the first vintage of Franco…and he agreed!  In fact, Lafite’s former winemaker recommended that it be bottled as a single vineyard wine. ($75)

The Finest Capers are Sicilian 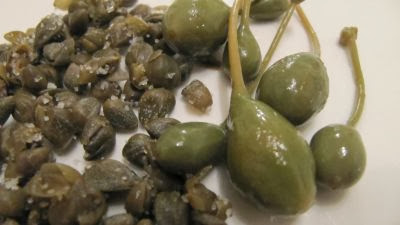 While capers have become an indispensable part of every foodie’s pantry, some may neither know that Sicily makes la crema de la crema of capers, nor how caper berries differ from capers.  For certain, few know of caper leaves.

Most caper lovers are aware that these culinary gems are actually edible flower buds of a bush.  Their wild bushes thrive in the Mediterranean, so it’s no surprise that Morocco, Spain and Turkey produce the bulk of the world’s capers.  While there are many countries from the tropics (where capers are thought to have originated) to Europe that produce the delectable buds,  the ones from Sicily are the most prized among the globe’s most sophisticated chefs.

Sicilian capers are packed in sea salt versus their briny counterparts from other parts of the world that are preserved in an acidic solution.   Packed in salt?  Don’t despair, as soaking them for five minutes in water will rid them of any salty taste.  Whereas a brine overwhelms capers, the Sicilian salt-cured technique produces delicately flavored morsels.  It’s no wonder in Sicily why their versatile, tantalizing capers appear in everything from antipasto, to pasta, and even gelato.

A few other important facts about capers:  less is more. The smaller the caper, the more concentrated the flavor.  Check out  the jar of capers in your frig or cabinet.  The label most likely will say “non-pareil.”  The smallest size of capers are called non-pareil.  Most capers sold in the US are non-pareil.  The general rule of thumb is the smaller the size, the better (and more expensive) the caper.

Another interesting note:  if the caper bud is not picked, it flowers and then produces a fruit called a caper berry.  Caper berries are significantly larger (the size of the average olive) and considerably milder in flavor.  They are also far less acidic.  One of the best salads we had on our recent Wine-Knows private yacht trip through the Greek Islands, was a salad made with caper berries.   The salad’s ripe tomatoes were acidic and the caper berries were the perfect match to downplay the dish's already acid profile.

But, hold on to your hat!  While Sicily may produce the best capers, Greece provides another addition to the caper's culinary prowess.  Greeks use caper leaves in many of their salads and fish dishes.  These tiny leaves of the caper bus, preserved in salt or a brine, are rarely seen outside of Greece so is you do spot a jar buy everyone you can.  They are the most delicate of all the caper bush's gifts and add an interesting, almost lemon-like component.  I would not be the least bit surprised if caper leaves don't become the next hottest gourmet product in the US. 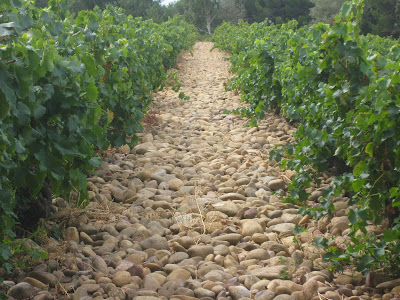 How exactly these region-specific microbes contribute to regional variation of a wine involves taking the scientific evidence to the next step of proving how terroir actually gets into a bottle of wine.  For more on this fascinating investigation, check out the recent article in the New York Times:  http://www.nytimes.com/2013/11/26/science/microbes-may-explain-some-of-the-mysteries-of-terroir-and-wine.html?ref=todayspaper&_r=0
Posted by June Forkner-Dunn, PhD at 1:00 AM No comments: