My Kind of Fast Food 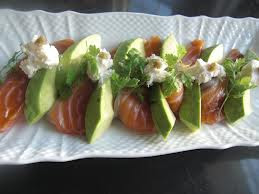 I’m leaving in less than a week for two months out of country.  The last thing on my mind is cooking…and the last thing I want to do is to dine out as I’ll be eating out for the next 60 days.  Here are my favorite super yummy “fast” foods that can be made in under 10 minutes:

1. Salad Caprese:  this one is a no-brainer in the height of tomato and basil season.

2. Smoked salmon:  a staple always in our freezer.  Love it on a salad using the final veggies in my frig.  Or, on a sandwich with whatever greens I have…as we live in the avocado capital of the world, they’re always on hand and go perfectly on the sandwich.

3. Pesto pasta:  our freezer is full of pesto all year round and the panty is continuously stocked with pasta.  The biggest amount of time spent to create this dish is waiting for the water to boil.
4. Omelette:  we’re headed to France where every bistro has an omelette on the menu.  Any left-over cheeses, vegetables, herbs etc. are used for the filling.

How a Croatian Changed the Course of California Wine 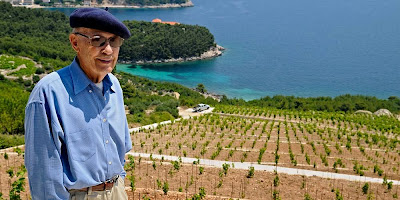 Mike Grgich at his estate in Croatia

If you’re a wine lover and have not read Judgement in Paris by George Taber, rush out and buy a copy.  I can’t think of another book that sets the stage for American wine more than this one.   Taber chronicles the world’s most famous blind tasting where two Californian wines beat out a lineup of some of France’s priciest Cabernets and Chardonnays.  One of these Californian winemakers was born in Croatia.

Native Croat, Mike Grgich, was the winemaker at Chateau Monhelena in the Napa Valley at the time of the tasting.   Montelena’s Chardonnay was being tasted against the biggest mover and shaker white Burgundies.  Of the 11 judges, nine were French including a Bordeaux wine chateau owner, the proprietor of Burgundy’s most iconic winery and a sommelier from one of France’s legendary three star Michelin restaurants.

Judges were asked to rate each blindly tasted wine on a 20 point scale, as well as to rank each by first place, second place etc.  The wine world has not been the same since the winner of the Chardonnay-based wine was announced.  Upon hearing that the winner was the Croatian’s California Chardonnay the French judges were outraged.  Things really came unglued, however, when the top spot for Cabernets was Stags Leap from California.  One judge asked for her ballot back.  Others voiced their indignation by demanding a recount of the results.  Their outrage is carefully chronicled in Judjment in Paris.  Taber even includes the judges’ score cards.

After this tasting the California wine industry was catapulted into a new stratosphere as oenophiles around the globe took note of the huge victory.  Moreover, Mike Grgich’s career was made.   He left Monthelena and opened his own winery, Grgich Hills.  But, he never forgot his native Croatia.   He returned to Croatia in 1996 and opened his namesake winery.  Joining us on the 2014 tour to Croatia?  Come judge for yourself.

Posted by June Forkner-Dunn, PhD at 4:59 PM No comments: 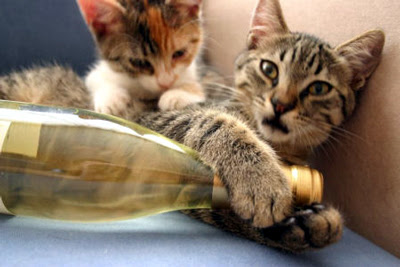 Wine-Knows is heading to New Zealand for the Southern Hemisphere’s harvest in March 2014.  There is no varietal more associated with a particular country than Sauvignon Blanc with New Zealand.   Kiwi-Land, like most countries, offers two distinct styles of Sauv Blanc wines: tropical fruit or grassy and herbaceous.  I had the worst rendition of the latter profile last week at a very high-end dinner with group of folks who know a little something about wine and food.  While some loved it, I detested everything about it.

The wine, a pricey one from a famous chateau, was a white Bordeaux (this one was nearly all Sauvignon Blanc with very little Semillon).  The gentleman sitting next to me exclaimed,  “This is a classical example of cat piss.”  I thought he was at first referring to the color.  In a way I wish that he had been, as when queried he revealed that he was describing the taste.  Far in the back of my mind I recalled that I had heard this phrase used before to describe some of the herbaceous components of Sauv Blanc.  (BTW…it’s not a flaw---it’s a style.)  And, the gentleman was dead right.

Taking a deep breath, I tried the wine again hoping that the 10 minutes which had elapsed might alter my initial perception.  I found an even stronger rendition of cat urine both in the smell and taste.  I ended up setting the wine aside, but went back to it twice during the dinner.  Even food couldn’t cover up the feline fiasco in my glass.  Others at my table thought that it paired fairly well with the seafood.   Maybe they were cat-lovers?

I always say that one of the best things about wine  is it’s the only time in life that one cannot be wrong---it’s all about personal preference.  So, I’ll close on a positive note with exactly that. Those who will be flying with us to New Zealand will have an opportunity to taste both the fruit example, as well as the herbaceous/grassy rendition of Sauv Blanc.  I’m praying, however, that there will be no tabbies in the bunch.

Posted by June Forkner-Dunn, PhD at 4:49 PM No comments:

The height of summer is here…farmer’s markets are over-flowing with tomatoes, basil and stone fruits.  With folks taking advantage of every opportunity to eat outdoors there’s always the question of what wine to serve during our hottest month.  While many opt for whites and rosés, there are some excellent, lighter-bodied reds that should not be forgotten.

Casual summer dining at our home around the swimming pool this year will often include one or more of the following:

Another white option is the sublime varietal Torrontes from Argentina.  If you
haven’t tried it, you should.  One sip of this gentle peach-and-white-flower wine
and you’ll be hooked.  Best producers?  Try Familia Zuccardi or Altavista. (<$15) 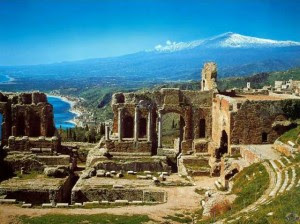 Mount Etna’s slopes are the birthplace for some of Sicily’s finest wines.

For serious winemakers, Europe’s tallest (and the world’s most active) volcano has recently become the place to be.  Nearly thirty years ago when I first visited Sicily, there were only 5 producers making wine from grapes grown on Mount Etna.  Today, there are close to 90.  Why the renaissance?  Call it the Italian X-factor.

The rebirth of growing grapes on this 11,000 foot volcano (grapes are grown up to 3,500 elevation which makes Etna the highest vineyards in Europe) has occurred because of changing philosophies in the wine industry.  As quality has trumped quantity, the low-producing indigenous ancient vines on the inhospitable 45 degree volcanic slopes are now revered for the unique wines they produce.  Moreover, the terroir created by the volcano dramatically adds to the X-factor.  Its volcanic soil and distinctive microclimate create wines with intense minerality and lavish complexity.  Last, the area has attracted winemakers not only from other parts of Sicily but from regions such as Tuscany because of its fair-priced land.  Many of Etna’s vines were abandoned 30 to 35 years ago, when the cost of producing wine became too great. The new arrivals were able to purchase deserted vineyards, acquiring the low-yielding old vines that are near and dear to many winemakers.

Mt. Etna has become one of Italy’s most exciting wine regions.  While some vintners believe the soils are best suited for reds, others love what the white varietals produce.  Here’s a sampling of my go-to Etna producers that are making magic on the volcano:


Coming with us to Sicily in 2014 for the harvest tour in September?  You’ll be visiting both Biondi and Planeta, and you’ll be drinking the Firriato & Graci.