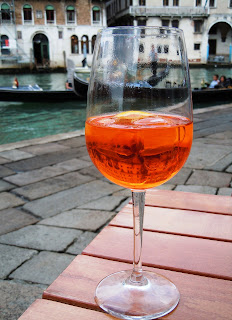 Aperol is a wildly popular Italian aperitivo, (the French equivalent of an aperitif----an alcoholic drink, drunk before a meal to “wet the appetite”) especially in the North East region of where it originated.  On a recent trip to every table of Italians had an “Aperol Spritz” (Aperol mixed with Prosecco, a sparkling wine from the hills above .)  The apertivo was hard to miss due to its bright neon-orange color, derived from an intense infusion of sweet and bitter oranges along with rhubarb.
Only recently exported to the , Aperol is becoming the new Bellini cocktail for Americans foodies.  Even Ruth Reichel, former restaurant critic for The New York Times and editor of Gourmet, has recently twittered about Aperol.
Here’s my fave way to serve it…my interpretation of the Aperol Sprtiz:
·        2 oz Aperol
·        2 oz Prosecco (or other dry sparkling wine)
·        Splash of sparkling water
Place all ingredients above in a wine glass with ice cubes and decorate with an orange slice.
Tomorrow we board a plane for a sorely needed R&R with friends at a villa on .  You can bet that we’ll be having an Aperol Spritz to celebrate our arrival.
Posted by June Forkner-Dunn, PhD at 12:00 AM No comments:

Talk Dirt to Me 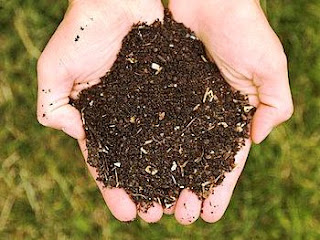 It doesn’t matter what country we’re in, on all of our wine and food tours a fundamental concept is the French term terroir.  Derived from a Latin root meaning “earth,” terroir speaks to the relationship between a wine and that specific location in which the grapes were grown.  While there is no literal translation, terroir denotes the sum of the effects that the local setting has on the making of a wine.  Examples include the soil composition, sun, soil drainage, topography, humidity, and even the native environmental pests.
Terroir is also critical with food products.  Cheese, olive oil, coffee and tea, for example, are also profoundly influenced by the terroirs in which they are grown. The , France recognized centuries ago that they had a unique environment for producing blue cheese.  The soil that births grasses eaten by Roquefort area cows are one part of the area’s terroir;  local bacteria in the caves where the cheeses are aged are another factor responsible for creating a cheese like no other in the world, including no other blue cheese in France.
Looking for a novel party idea?  How about a “Talk Dirt to Me” theme, where you offer wine made from the same grape grown in different regions of the same country (e.g. wines from California’s Central Coast and Napa Valley).  Combine this with a tasting of foods items made from the same product but from diverse localities (such as Parmiggiano Reggiano and Grano Padano, both made from cow’s milk in a similar fashion, but from very different terroirs).
Posted by June Forkner-Dunn, PhD at 10:00 AM No comments:

Many of us have succumbed reluctantly to the outrageous $35-50 corkage fees of some "destination" restaurants.  An upscale Italian trattoria in La Jolla, Ca. that I used to frequent (it’s now closed), offered a bit of sorely needed comic relief on corkage policies that went something like this:
Posted by June Forkner-Dunn, PhD at 10:00 AM No comments: 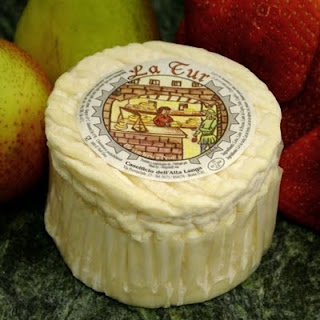 "Meritage" in the wine world signifies a wine made from a blend of grapes, most often varietals.  La Tur is an elegant cheese made from a blend of milk from cows, goats and sheep.  A meritage wine is meant to balance the best of all the varietals.  In the case of La Tur, the combination of the three milks makes for an exquisite product in which the whole is greater than the sum of its parts.

This decadent gourmet indulgence comes from ’s Piedmont region (home of another gastronomic extravagance, the white truffle).  The operative word for La Tur is luscious. I can think of no other cheese with a more succulent texture.  This one would unquestionably be in my last meal’s cheese course…and that’s saying something as I am an aficionado of fine cheese.

La Tur (made by Caseificio Alta Langa in the same hills where truffles grow) is now fortunately exported to the .  The company does not accept visitors, however, Wine-Knows Travel has secured an “exception” appointment to tour the factory and watch La Tur’s birthing process.  For more information about this 2012 tour to (perfectly timed for the Truffle Festival and the harvest of Barolo), check out the trip at www.WineKnowsTravel.com
Posted by June Forkner-Dunn, PhD at 12:00 AM 1 comment:

Posted by June Forkner-Dunn, PhD at 10:02 AM No comments:

The Best UNKNOWN Wines in the World:

If you come to our home there's a very good chance that you'll be served one of the following wines sometime during the course of your stay.  We do this purposely to introduce guests to varietals they may not know.   These under-the-radar wines can be complex and extremely well made.  As they are virtually unknown to most Americans, prices of all these wines are very fair…and will remain so until they are discovered and prices dramatically escalate.
1.      Mencia from :  Only grown in Northwest Spain,  the Mencia grape was not even known to oenophiles in  ten years ago.  Now that wines made from Mencia have won so many gold medals in the country, Spanish consumers in-the-know are clamoring to get it.  The New York Times and Wall Street Journal have recently jumped on the Mencia bandwagon, so savy American wine lovers are now joining in.   We admire this varietal so much that we took our latest group to to the area in which it is grown…the tour participants fell in love with the it.
2.   Carmenere from :   This grape was brought from by French settlers 150 ago.  While it is impossible to find Carmenere in today  (all of the vineyards were wiped out in the late 19th century by the bug phylloxera), the varietal has thrived in .  Thought to be a “distant cousin” of Merlot, it offers a terrific profile of cherries and spices.
3.  Torrontes from :   Twenty per cent of all white wine sold in is Torrontes.   Characterized by distinctive peach and apricot aromas and taste, this velvety textured fruit-bomb is one of my fave summer wines.   Serve it at your next party and you’ll have a following of Torrontes converts who will love you for introducing the varietal to them.
4.  Vermentino from :    Want to be instantly transported to a seaside trattoria on the ?  Pop the cork on a bottle of Vermentino and you’ll swear you could be on the Ligurian coast (North West Italy near ) or the .  Both of these areas produce the best renditions of this white wine. Bright melon and floral notes are layered with ripe stone fruit and a hint of citrus.  The perfect wine for a hot day on the Italian seashore…or in your backyard.
5.  Touriga Nacional from :   In our recent Blog posting of July 30, we spoke of one of the wines from the (home of the famous Port wines) that was one of Wine Spectator’s Top Ten Wines in the World.  This wine was made from Touriga Nacional.   The varietal, used to make expensive Ports, is one of the most under-rated in the wine world.  It can make an intensely complex non-Port wine that oozes flavors of concentrated black fruits, and completes the deal with a killer finish.
Posted by June Forkner-Dunn, PhD at 12:31 PM 2 comments:

“There’s gold in them their hills!”  On a recent trip to Santa Ynez, and Paso Robles wine regions to set up final details for our October tour, I was astounded to find these bargain gems:

A lover’s delight made from white Grenache, Viognier, Rousanne & Marsanne.
This winery makes the best Alsation varietals (all bone dry) wines in the .
Yeah, I know, ABC (“anything but chardonnay), however, this one rocks.
You gotta be crazy….a good Pinot for <$25?  Yep, I’m crazy in love with this one.
Spice and berry notes on with this medium-bodied charmer make it a perfect summer red.
You’ll be catapulted to when you taste this pear and citrus bomb.
Wine & Food Lovers Tour:
http://www.wineknowstravel.com/
Posted by June Forkner-Dunn, PhD at 3:19 PM No comments: