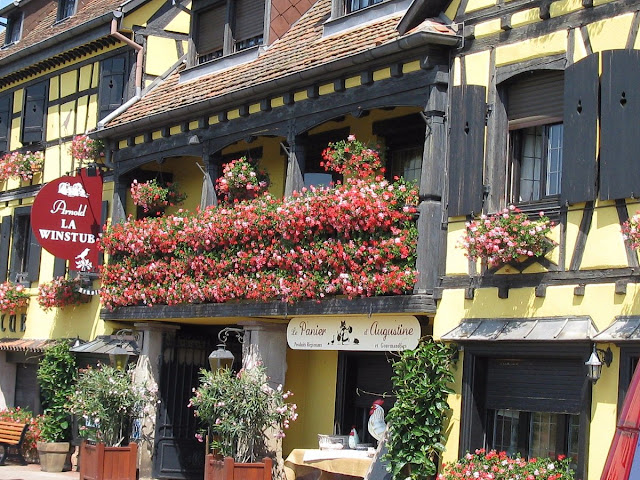 This is the last blog for the month of May on Alsace.  A final tribute to one of France's smallest wine district, this article is about Gewurztraminer----sometimes considered an "ugly step-sister wine."  The reason for this has nothing to do with its taste, but more due to the fact that many can’t even pronounce it.  (Turn on the sound of your computer to learn how to pronounce it: https://www.youtube.com/watch?v=z6H6QcFPCNI)  This fairy God mother article hopes to change your perception about "Gewurz" (as it is often referred). 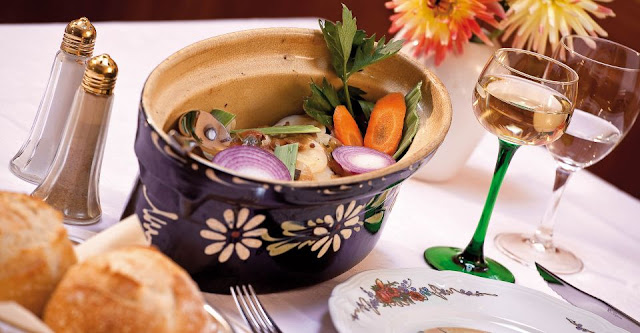 A Slipper that Doesn’t Fit

Other than its difficult name, there are several reasons why Gewurztraminer might be the last wine chosen for the Prince’s ball.  First, it is mistakenly associated with Germany….and German wines aren’t so popular.  The best Gewurz, however, actually comes from France.   Alsace (France's far eastern wine district) is home to some killer Gewurz.  As Alsace is not typically on the average wine lover's radar screen, this is yet another reason why this wine gem remains unknown. Gewurztraminer is also often erroneously associated with sweet wine.  Wrong.  While there are some sweet renditions, but many Alsatian Gewurz are bone dry. 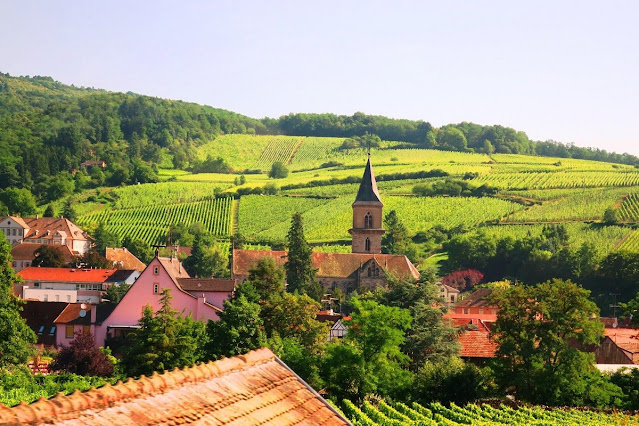 Now that the reasons why Gewurztraminer is unknown have been explained, here are the reasons this stunning wine should be considered.   First, the wine is especially aromatic.  For women, its aromas are so enticing that it’s tempting not to not dab the back of one's ears with it.  Like a seductive perfume, Gewurz definitely is one of those wines that “had the Princess at bonjour.”  Intense floral aromas (think roses) are married with beguiling fragrances and tastes of exotic lychee and ginger.  The wine can also be laced with grapefruit/tangerine or pineapple depending upon how ripe the grapes were when picked. 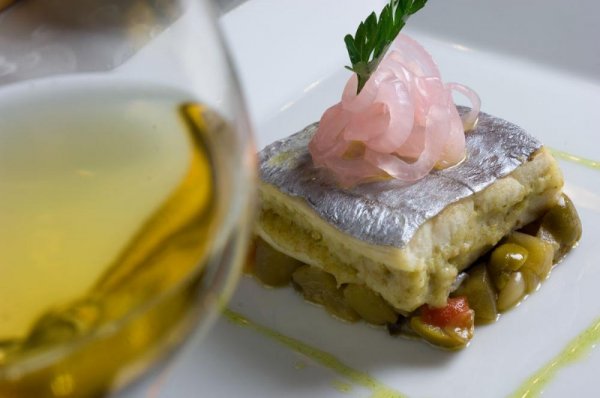 This varietal is a perfect pairing for fish & seafood

Foods to Serve at the Ball

Let’s explore next how dry Gewurtraminer works with food.   Both white fish and seafood pair beautifully with Gewurz.   Many foodies are stumped when choosing a wine for duck.   Gewurtz to the rescue!  Because of the wine’s ginger flavors, it also pairs well with dishes which have ginger in their recipes.   Curries and Moroccan tagines are just two examples.  Heavily spiced cuisines, such as Indian, also pair perfectly with a glass of an exotic Gewurtz. 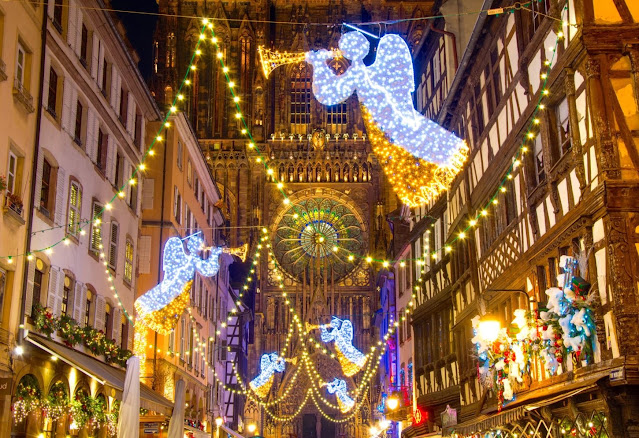 Alsace is a relatively small wine region, but its wines can be found in the US with a bit of diligence (especially online).  Trimbach delivers terrific quality/price at $20.   Domaine Weinbach is a stellar winery that you may want to try.   Weinbach's Cuvee Laurence is a dreamy, creamy dry Gewurz that will set you back $45-50.  Worth every penny, the wine is among the best of this varietal in Alsace.

Wine-Knows will be visiting Alsace the first week of December as part of our Christmas Markets of France & Germany trip.  As the Alsace region is known also as the epicenter of foie gras production (and has more Michelin star restaurants than any other region of France),  it's a gastronome's paradise.  Why not attend join this group and see if the Gewurztraminer shoe fits? 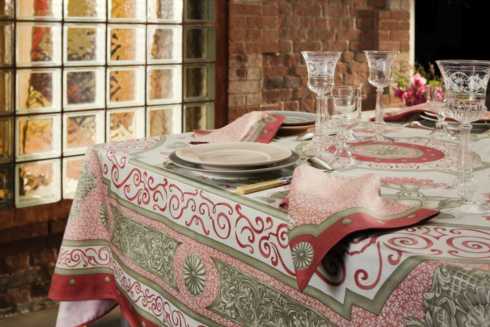 This is a second article in the series on Alsace.  What does Hermes, Ralph Lauren, Catherine Deneuve, the White House, as well as the Royal Courts of Europe have in common?  The answer is they are all customers of Beauvillé , a premier French linen dynasty located in Alsace.  Fortunately for Wine-Knows going on this year’s Christmas Market in France and Germany, they will be visiting the factory where these extravagant linens are made. 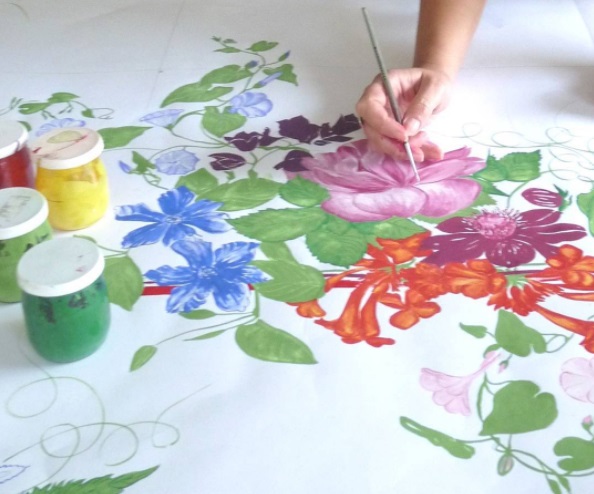 Beauville is known for the vibrancy of its colors

Beauvillé is a small family-owned firm where traditional woodblock and screen printing skills have been passed down from generation to generation for the past 200 years.   This company is all about quality.  Every single piece of Beauvillé is designed, printed, sewn and finished in house.  As many as 20 colors are used in one design and even the 25 custom dyes are all made at Beauvillé. 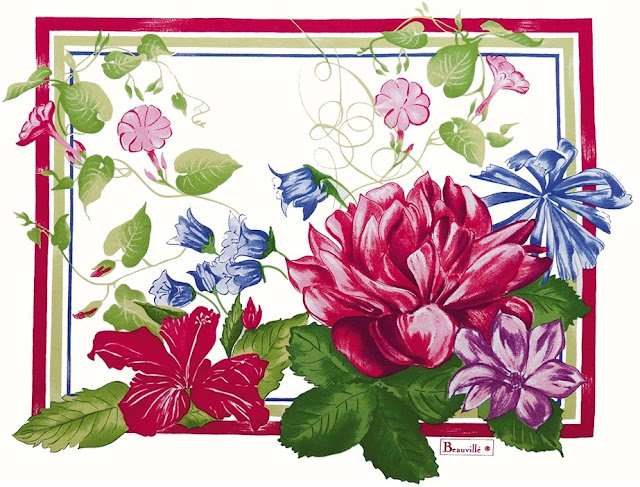 This popular design was available in placemats, napkins, tablecloths & runners

Beauvillé’s artisan designers create two new collections of linens each year.  Many of the more traditional patterns are inspired by 18th and 19th century designs where patterns were transferred onto the cloth by wood blocks, block by block.  Today many of the designs are crafted using the laborious silk screening process.  A separate screen must be used for each color. 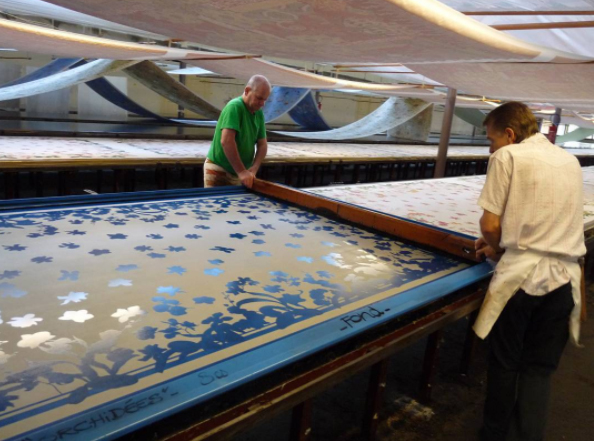 The first layer of color has been applied....several more will follow

Those coming on the Christmas Market tour in early December will be able to purchase Beauvillé products at its factory store where prices are typically 25-30% less----perfect timing to purchase Christmas gifts for discerning foodie friends or family.  There’s also a back room bargain area for discontinued patterns, or have a small flaw that does not stand-up to the high quality of Beauvillé----in this part of the shop, savings are often 50% or greater. 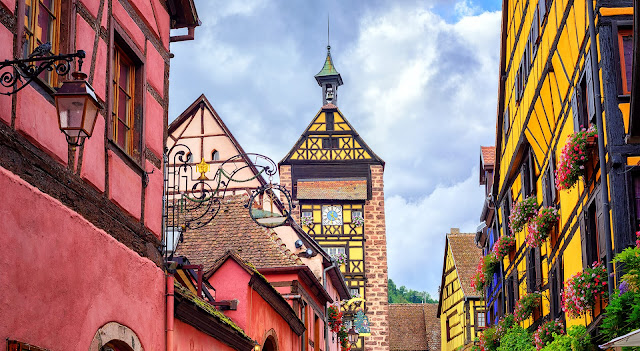 This is the first of a three part series on Alsace during the month of May.  France’s smallest wine district, Alsace is located in the country’s northeast area.  This tiny wine region, which shares a border with Germany, has in fact passed ownership between France & Germany three times since the 17th century.   Think of it as an area of cool climate grapes, but with a warm French soul. 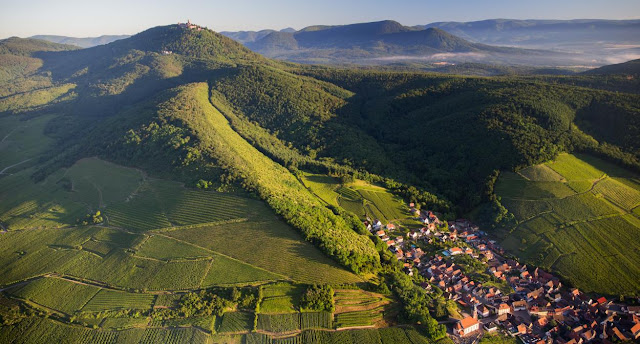 
Some of Alsace’s grape varietals are very well known...others not so much.  Most of its grapes are of French origin, but there’s one from Italy, and yet another from Germany.  Alsatian wine remains relatively undiscovered.  This may also be due to the fact that many erroneously think all Alsatian wines are sweet.  In fact, many of Alsace’s wines are dry.  Another possible reason for its obscurity, Alsace’s wines are inexpensive (in comparison to Bordeaux, Burgundy and the Rhone).  Pricing has nothing to do with quality; like most things, Alsatian wine prices are based on supply and demand. 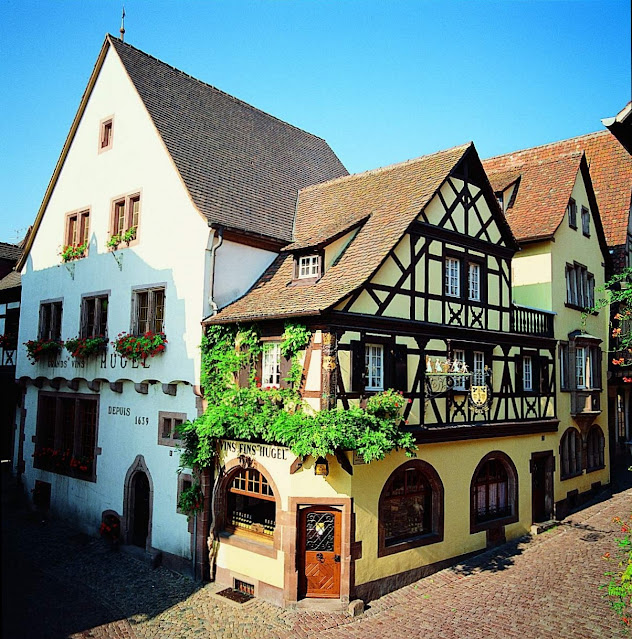 Gewurztraminer (or as it is frequently called, Gewurz), is actually a mutation of an ancient grape from northern Italy at the base of the Alps.  Traminer, the mother grape, is named after the Italian village from where it is thought to originate.  A light red varietal, Gewurz is used to make white wine in Alsace.   The varietal is known for its exotic aromas of roses and lychees.   Gewurztraminer will be discussed in more detail later this month.

The Riesling grape is thought to be of German origin.  This green-skinned grape was once the darling of 19th century European royalty, commanding a higher price than both Bordeaux and Champagne.    Riesling, when grown in cool climates,  produces a floral wine with lemon-lime flavors.  Warmer weather brings out stone-fruit (especially apricot) and exotic flavors such as pineapple. 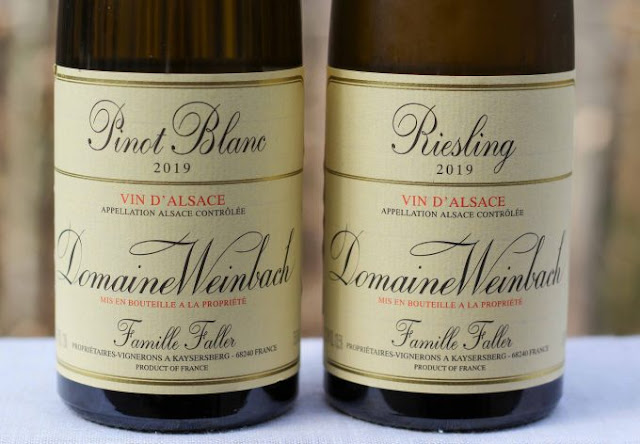 Domaine Weinbach is one of the area's many stellar producers

All of these three Alsatian varietals belong to the same grape family.  Even though Pinot Blanc and Gris are white varietals, they are actually mutations of the black Pinot Noir grape which is native to nearby Burgundy.

Alsatian Pinot Blanc typically has an apple-almond profile, with a hint of spice.  Pinot Gris (known as Pinot Grigio in Italy), is more full-bodied, richer, spicier and more unctuous than it’s Italian counterpart.    Pinot Noir in Alsace used to be considered a light-bodied wine but this has changed due to global warming and better winemaking. 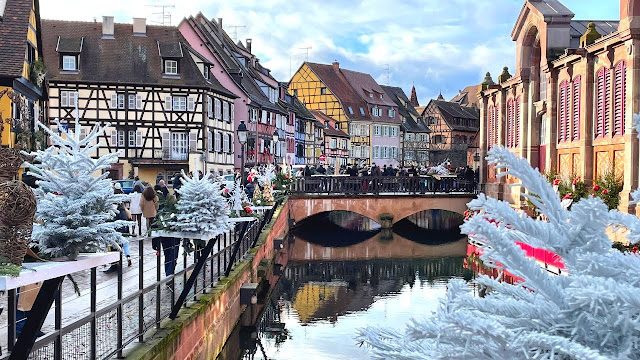 Wine-Knows will be hosting a trip to Alsace during its famous Christmas markets, December 6-16, 2022.  Come learn about the wines of this special French region during its most soulful time of year.