The Best Wine Regions for a Beach Holiday

Memorial Day weekend marks the beginning of the summer season.   Summer always makes me think of the beach, but it also makes me think of Vermentino, Rosé, Sancerre, Torrontes, Viognier and Albariño, along with light reds such as Frapatto and Pinot Noir.  Below are a list in alphabetic order of half a dozen vacation spots on five different continents that offer fantastic enticements for the beach lover, paired with a wine district <50 miles away. 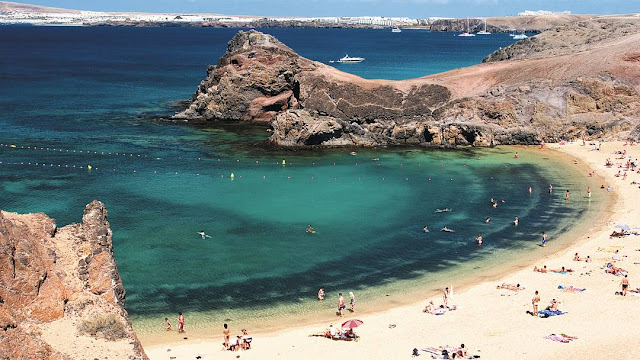 Canary Islands, Spain
The Canaries have become immensely popular with Northern Europeans who come here by the planeloads to soak up the never-ending sunshine at seemingly never-ending beaches.  Located just off the coast of Africa, the Canaries were formed from underwater volcanoes millions of years ago.  Their volcanic soil makes for some of Spain’s most interesting white wines: appealing mineral notes from the soil and well-ripened fruit (think tropical fruits) from the abundance of sun.  Many wine experts are agreeing that the Canaries are making fascinating wines.  Check out the islands of Gran Canaria and the smaller Lanzarote; at both you’ll be surrounded by breathtaking beaches and vineyards. 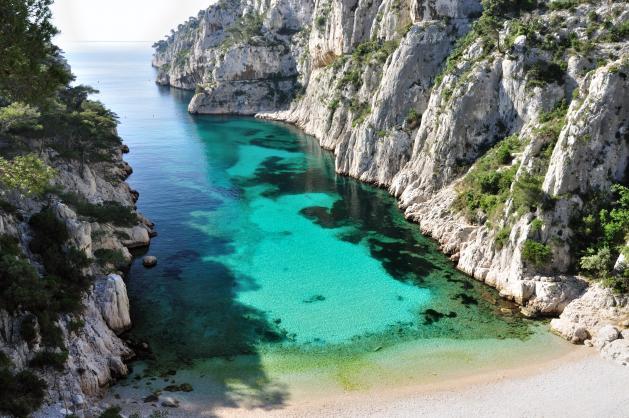 Breathtaking inlets such as this are only a few minutes from Cassis.
Cassis, France
You may have not heard of this gem of a beach town as it doesn’t have the same panache as jet-setting St. Tropez, Cannes or Antibes.   While St. Tropez has bazillion Euro yachts, art galleries, and wannabes in skimpy bikinis, Cassis offers something much more majestic:  drop-dead gorgeous coves and beaches, along with one of the prettiest harbors you’ve ever seen.  While Americans flock to St Tropez, Europeans head to Cassis for an unspoiled view of French beach life.  The best part?  Two wine areas are within and easy reach.  One appellation, located in the hills just outside the village, makes lovely whites (Cassis A.O.C.).  The second area is Bandol, <30 minutes away where some rock star red wines are crafted. 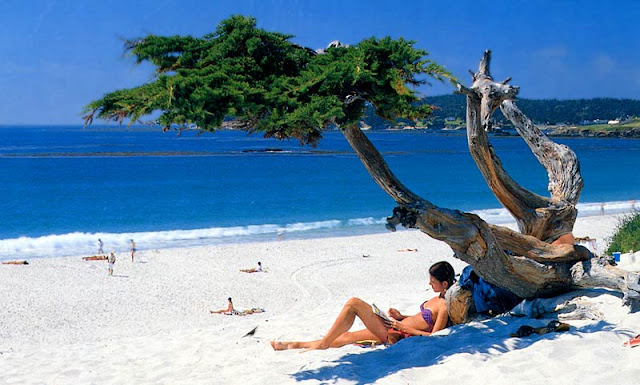 Carmel-by-the-Sea, California
Many people don’t know that Carmel has one of the most magical beaches in the state.  (That’s because the storybook hamlet of Carmel is so ultra-charming that visitors never make it to the very end of the main street….regrettably, the beach is only a few blocks further downhill from the last of the village’s irresistible boutiques).   Many people, awe-struck by the beauty of Carmel, may not realize that they are also in close proximity of some terrific wineries.  Carmel Valley is an easy 20 minute trek where you will find several wineries (love Talbott) and some great restaurants (try Corkscrew Café for lunch).  However, if you don’t want to drive, many of the area’s wineries are opening up tasting rooms in the village of Carmel-by-the-Sea (don’t miss De la Tierra which offers good quality price ratio wines in an attractive tasting room). 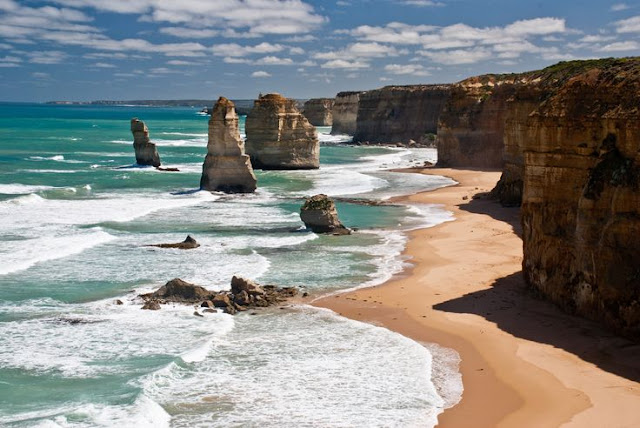 Melborne, Australia
If you can possibly tear yourself away from Melbourne’s charming 19th century Victorian-laced downtown, then head to its beach area.  It was a no-brainer to put this dramatic coastline on the list.   Not far from this shoreline are two different wine districts.   My favorite is the Mornington Penninsula  which offers some of the most stunning beaches I’ve seen.  Try the award-winning wines of Paringa and Red Hill, the last of which offers jaw dropping vistas of the seashore.  The other wine district, Geelong, is also worth a jaunt. 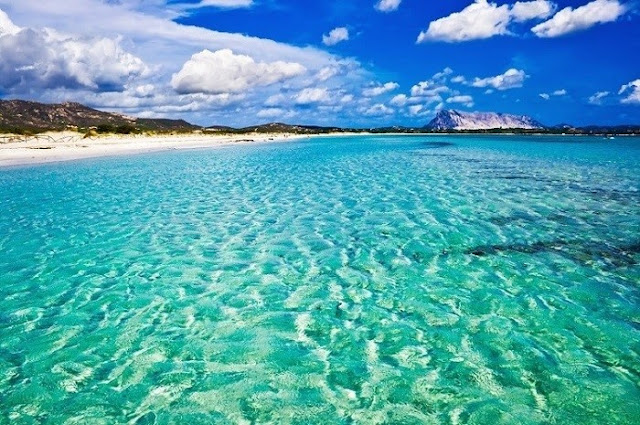 Sardinia, Italy
One of my favorite summer varietals is Vermentino.   One of my favorite beach experiences of my entire life was at the magnifico hotel, Pitrizza (www.pitrizzahotel.com) on the island of Sardenia, where the best Vermentino’s in the world are produced   Developed by the Aga Kahn in the 1960’s and now owned by the Emir of Quatar (one of the world’s richest men), the place is the epitome of quiet elegance.  Located on the island’s “Emerald Coast,” it’s within driving distance of wineries (that is, if you can possibly tear yourself away from La Pitrizza.) 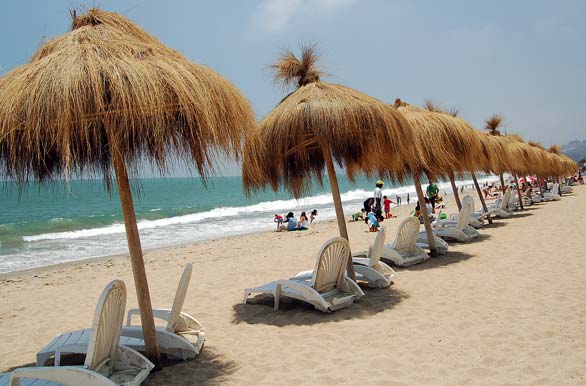 Viña is a little slice of Chilean paradiso on the sea
Viña del Mar, Chile
Referred to by Chileans as “Viña,” this several mile long beach area is located just outside of Valapariso, one of the country’s main cities (and only 100 miles from the capital of Santiago).  Immensely popular with South American beach lovers, Viña seems to have it all:  powdered-sugar-sand, delightful beach-side restaurants, gentle waves for families, and nightlife for every decade.   Oh yeah, the Casablanca wine district is nearby which means opportunities in this mecca for whites and cool weather reds.  Opt for tastings at Veramonte and Morandé, the latter of which has an upscale restaurant with a cutting edge chef.

The travel season is approaching.  If you’re heading to Spain here are some of the country’s culinary dishes you should seek out. 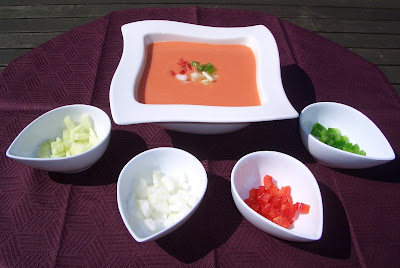 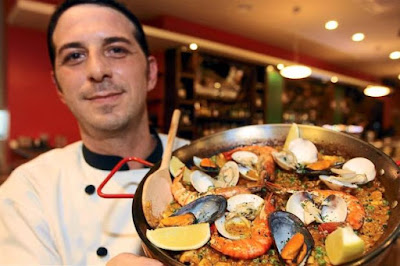 Paella is an impressive rice entree cooked with saffron.   Every province has its own variation;  along the sea it’s filled with seafood;  inland it’s meat and or poultry; sometimes it's a mixture of both land and sea.  The vegetable ingredients are also dependent upon the region and many times include green beans or artichokes.

Tortilla Espanol is on the menu of every tapas bar and most restaurants.  This dense potato omelette (which has no relationship to the Mexican tortilla) is served in slices.  It’s a great choice for vegetarians who often find eating in meat-centric Spain difficult.  In its best form, the tortilla can be sublime. 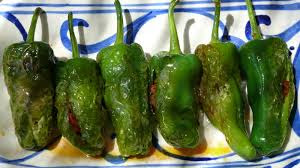 While these padrons were stuffed with chorizo, the best version just may be plain

Padron peppers are about the size and color of jalapenos, but that is where the similarity ends.   Padrones are very mild and sweet.  They are typically sautéed in olive oil & topped with sea salt.  Served in both tapas bars and restaurants, this is one of my husband’s and my favorites. 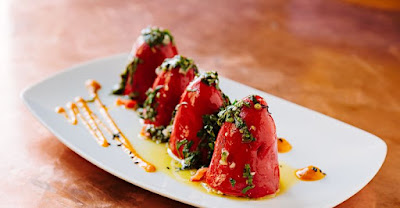 Piquillos are addictive...especially these filled with crab

Piquillo peppers are becoming increasing popular in the US (Trader Joe’s is even carrying them now).  These very mild red peppers are roasted over open fires, deskinned, and then packed in a jar.   Piquillos are great stuffed with fish, cheese or meat, however, I often eat them plain, or add them to salads or sandwiches. 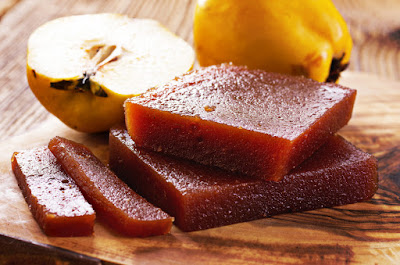 Membillo is made from quince
Membrillo is the best fruit preserve you’ll ever have.  Thickened and then formed into a block, it’s often eaten on toast for breakfast, but it’s also added to many Spanish pastries and cakes.  The most ethereal way to eat membrillo, in my opinion, is paired with one of the country’s mild cheeses as a dessert. 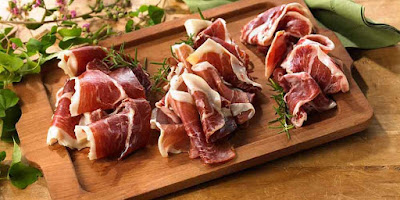 This special ham is pure nirvana

Iberico ham is not a dish but a product, however, no list of Spanish culinary masterpieces would be complete without paying homage to this fabulous food.   Made from a special breed of black pigs that graze on acorns, this is the pinnacle.  (Note:  I lean heavily to being a vegetarian, but I’m wild over this).

Bon viaje!   (Happy travels)
Posted by June Forkner-Dunn, PhD at 1:00 AM No comments:

Wine-Knows is heading to the Port region of Portugal for this September’s harvest.   If you’re one of the lucky folks who have a space on this sold-out trip, here’s a sneak preview of items that you should consider bringing home for yourself or for foodie friends.  If you’re not joining us, some of these items can be procured on the Internet. 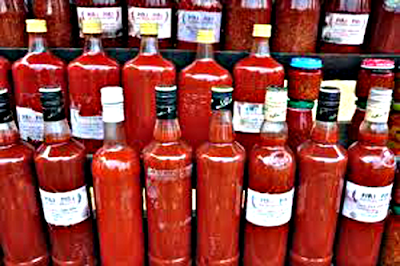 African BBQ sauce from Portugal's colonial days
Angola was under Portuguese control from the 16th century until the 1970’s.  Piri piri (Swahili for pepper pepper)  is an Angolan version of Tabasco.  This African rendition, however, has citrus and onion along with a variety of herbs such as bay leaves, paprika, basil and oregano.  It is a classical condiment on many tables throughout Portugal.  The ultimate pairing is with the country’s popular rotisserie chicken.

Just harvested from the top layer of the sea

"Flower of salt" is Portuguese sea salt.  With nearly 800 miles of coastline, the country offers several producers of this sea salt.  And, the prices are better than the French  fleur du sel. 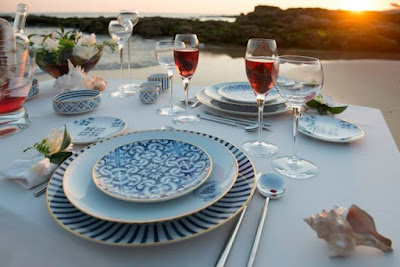 Many of Europe's Michelin-star restaurants use Vista Alegre

One of the most exquisite producers of fine porcelain in Europe is located in Portugal.  For centuries Vista Alegre has been one of the top choices for royalty throughout Europe (Buckingham Palace often uses Vista Alegre for their heads of state dinners). Wine-Knows will be visiting the factory to observe the entire process and this means access to the factory’s store. 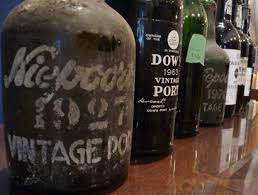 Vintage Port is only made in extraordinary years

How can one go to Portugal without picking up a bottle (or two) of Port?  Vintage Port, however, is just not any Port.  It’s only produced by the top Port wineries in the best years.  Since it’s often sold in half bottles, it’s a perfect treasure to tuck away in your suitcase for the flight home. 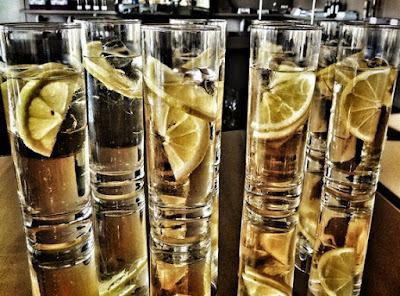 Served to Wine-Knows on the 2011 trip to Porto

You may be scratching your head on this one as very few white Ports are exported.
White Port, served over ice with tonic and a twist of lemon, makes for an extremely heavenly aperitif on a hot summer's day.  I plan to bring home every bottle I can fit in my checked luggage. 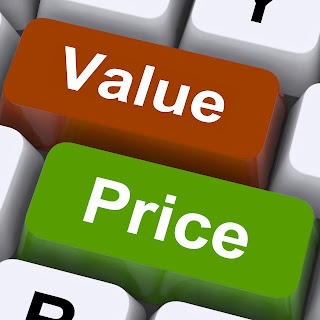 If you’re not wanting to drop serious money on a bottle of red wine and yet want a good wine, then head straight to the Malbecs.  One of the five red grapes allowed currently by law in Bordeaux (and used in the blend of some of Bordeaux’s priciest bottles), Malbec is vinified as a separate varietal in Argentina.  An Argentine Malbec is normally the best value red on a wine list.

In addition to their high quality/price ratio, I especially love Malbecs because they typically have soft tannins…this means the wine is approachable when young.   Another reason to choose a Malbec from Argentina is that Argentina rarely has poor vintages. Regardless of the year, you’ll get a good vintage.  (Take for example Robert Parker’s Vintage chart---he has rated 10 out of 10 of the past vintages in Argentina in the 90’s).   There’s no other spot on earth that has received these consistent scores for the quality of the vintage from Parker, or probably from any other wine critic.

An Argentinean Malbec is often a terrific choice because it can pair well with a wide group of foods.  Naturally, it’s a great red meat wine, but it can also work with spicy food.  Case in point: Argentina’s traditional chimichurri sauce is often served with the country’s famous steaks (chimichurri is an addictive high-octane spicy condiment).  This means that Malbec also goes well with Mexican food, in addition as spicy Asian dishes.  But, take it from this almost-vegetarian, Malbec is so not a one trick pony.  It can pair perfectly with grilled veggies, frittatas, and polenta.  The wine also works well with a pesto-pasta, or even a tomato-sauced pasta.

Malbec from Argentina is an unsung hero.  To learn more about this terrific varietal why not join Wine-Knows on our trip to Argentina and Chile next year?  There are four seats remaining on this harvest tour to South America.  Check out this trip’s details: http://www.wineknowstravel.com/