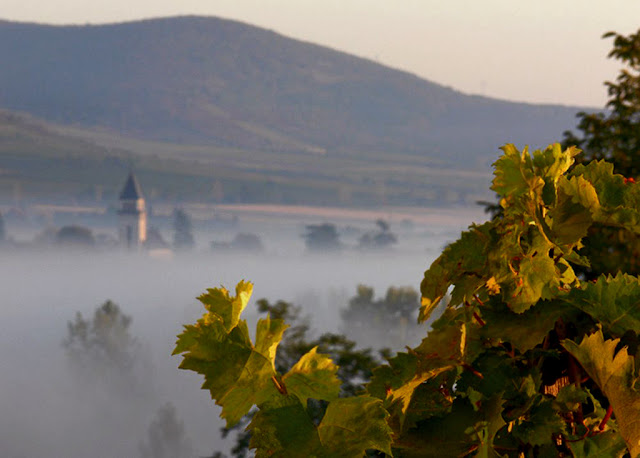 A special micro-climate of wet and warmth creates the perfect environment for Botrytis.

I landed in Hungary a few days ago and I'm currently in the town of Mad, deep in the heart of the Tokaj ("TOCK eye") wine district.  A few hour’s drive east of Budapest, this wine country is is so special that the entire district was declared a World Heritage site by UNESCO. Everything is wine-centric in Mad, including things such as the "Botrytis" Hotel. Golden ripe fruit is hanging on the vines and the autumn colors are painting the leaves.  Magic is about to happen.

Tokaj (or Tokay) is the sweet wine made in the Tokaj wine region.  It’s the world’s oldest botrytized wine.  Botrytis is a fungus that attacks sugar-laden grapes with the help a special micro-climate.  During the autumn a morning mist is created by the convergence of two local rivers; and, the wet mornings along with the warm afternoons create the perfect storm for the Botrytis fungus.  Like in the Sauternes district of Bordeaux, “noble rot” (aka Botrytis) thrives in these conditions.  Grapes are attacked by the fungus which bores microscopic holes through the skin of the berry to get the sweet nectar.  What is left is a shriveled, concentrated grape filled with uber-sweet juice, high in acidity (which balances the sugar) and filled with beguiling aromas caused by the interaction with the noble rot.

People in the Tokaj district long ago recognized they had a very special sweet wine like no other.  In 1757 the monarchy made a law that established geographical boundaries for the sweet wine region.   This was the world’s second appellation system (Chianti, the first, was legally demarcated in 1716.)  Tokaj didn’t stop there, however. Vineyards were then classified based on quality, and it all was approved in 1772.

From the 17th to 19th centuries Tokaj graced the tables of royalty throughout Europe.  In the late 1800’s, however, Tokaj fell victim to the phylloxera bug that destroyed the vineyards throughout Europe.  World Wars I and II didn’t help.  Nor did Communist rule.  Knock-off Tokaj from other countries further worsened the situation.

But, Hungary is on the move again supported by moneys from the European Union to reinvest in its prized Tokaj wine district.  The E.U. has cracked down legally on others in Europe using the protected name Tokaj.   Moreover, the E.U. has recently invested 330 Million Euro for viticultural improvements moving the local wine industry into the 21st century.

Nectar coming from the Tokaj region’s grapes is mentioned in Hungary’s national anthem---a testament to the importance of its sweet wine.  A deep Topaz in color, these luscious wines are truly a golden national treasure.  Tomorrow I head to the actual village of nearby Tokaj so stay tuned for my "mad-about" favorites from this special region.

The Ambiguity of Wine 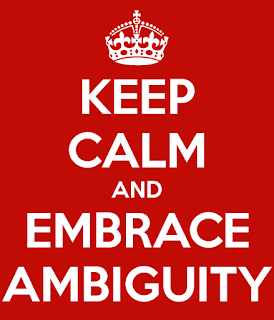 If you’re a serious wine lover you have no doubt heard about the tasting that changed the wine world---the Judgement in Paris.  There have been books written about it and movies made about the tasting that turned the wine world upside down when two American wines (a Napa Cabernet and a Chardonnay) beat out many costly Bordeaux & White Burgundies.  But, have you heard about the riveting follow-up tasting, the Judgement in Princeton?

This second tasting closely modeled the original 1976 event in Paris.  The tasting was blind.  Several of the iconic Bordeaux vineyards (e.g. Chateaux Mouton- Rothschild and Haut-Brion) were represented.  The nine judges were French, Belgian and American wine experts.  This tasting also had a huge twist.  The American wines were all from New Jersey.  While French wines won in both red and white categories, they narrowly squeaked by wines that cost pennies on the Euro of the French wines.  It is interesting to note that the two winning French wines were ranked in the last position by at least one of the judges.  Moreover, wines like Mouton-Rothschild received scores all over the map:  some judges rated it as low as 11 (out of 20), while another rated it 19.5.

So what do these two hallmark tastings tell us?   When tasted blind, world-class wine is in the eye of the beholder.  But, hold on, there’s more.

The University of Bordeaux gathered over 50 wine experts for a mischievous tasting and asked them to give their opinion on two glasses of wine:  one was white, the other was red.   What the connoisseurs didn’t know was that they were both the same white wine—red coloring had been added to one.  Several of these knowledgeable wine lovers described the red-colored wine with words such as “jammy” or “red fruit.”

Another experiment from the same researcher at the University of Bordeaux was even more damming.   This time he upped the ante by taking a middle of the road Bordeaux and pouring it into two different bottles:  one had the label of a fancy Grand Cru chateau, the other a label of an ordinary “table wine.”  If you’re following the drift of this article, it will be no surprise to you to learn that the experts described the Grand Cru bottle with illustrious words indicating a pedigree, while the exact same wine poured from the table wine bottle was referred to as “faulty,”  “weak,” or “light.”

Preconceived notions play a big part in wine and that is exactly why I prefer to taste everything blindly.  These studies also point out another salient point:  if wine experts can’t often tell the difference between a several hundred dollar bottle of wine and one that cost less than twenty bucks, why pay for the more expensive one?  Even more important, relying on expert opinions may not be your best bet in deciding on what wine to purchase.  Trust yourself and purchase bottles you enjoy!

Posted by June Forkner-Dunn, PhD at 9:45 AM No comments:

I just arrived in Bordeaux.   Although I was here in 2012, this town has shifted completely on its axis.  On my first visit in the early 1990's Bordeaux was a forlorn city scarred by run-down, abandoned warehouses along its vast river.  There was little tourism except for wine business folks who occasionally were forced to overnight at one of the city’s lack-luster hotels.  Even in 2012, the dining scene was equally uninspiring.  Yes, there were a handful of good restaurants, but they were old-school spots that had been serving the same menus for decades.   Today, the warehouses have been replaced by a $90 million cultural center.  A bazillion Euros of tourism monies are now flooding into the once forgotten city. 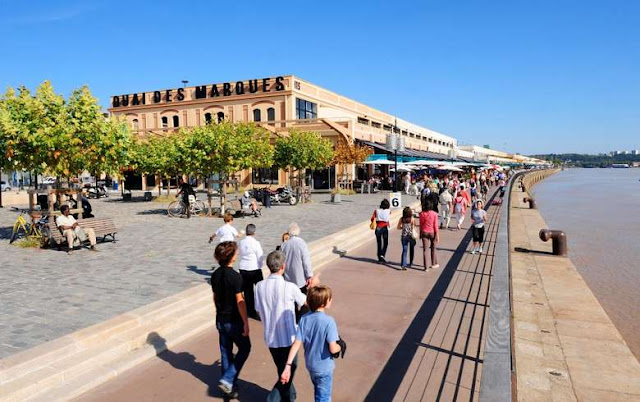 “Build it and they will come” is certainly the motto for Bordeaux.  The city’s drastic redevelopment of its entire waterfront now offers a plethora of tourist activities.  The biggest and brightest of all is the Cité du Vin (“the City of Wine”).  Ten years in the making, this museum-cum-cultural-events center contains a series of multi-sensory wine exhibits, along with a wine store selling selections from practically every corner of the globe. There are several restaurants with mind-boggling selections of wine, a wine bar, gift shops, and even a bookstore.  Tourists are in every nook and cranny of the town.  The Euros are flowing, along with the wine. 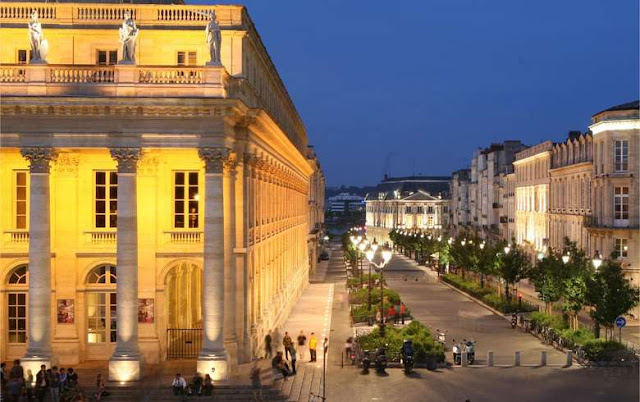 Rooms of the Grand Hotel overlook the tony Grand Theater

Hotels have joined in the town’s major cosmetic makeover. The 5 star Grand Hotel spent nearly $70 million to redecorate.  Smaller properties, equally focused on the sophisticated traveler, have followed.  Luxurious boutique hotels are springing up like morels after a spring rain.  Restaurants are following suit with cutting edge chefs flocking to the town to open temples for a new age cuisine.  Gordon Ramsay arrived in 2015 and already has two Michelin stars.  Tonight I'm dining at a just-opened farm-to-table place whose young chef has received raved reviews.  On today's walk I spotted countless new upscale wine bars, bistros and sidewalk cafes.  Fusion cuisine and food trucks appear to be the new norm. 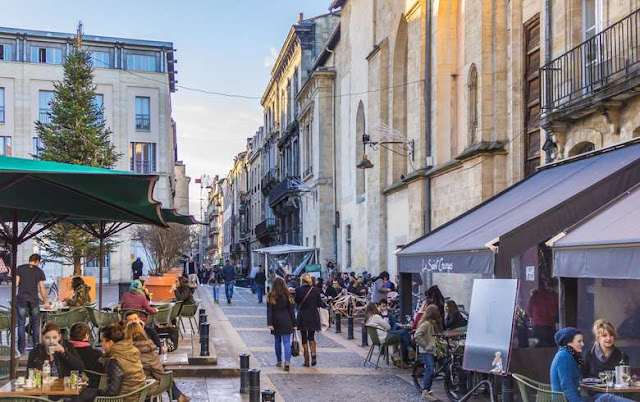 This could be Paris, non?

But, the downtown area is not all that is new in the world’s most famous wine district.   Wineries has joined in the revitalization by establishing wine routes for tourists.   More wineries are opening hospitality programs to welcome visitors for wine-tasting.  One of the most compelling change in the wine industry, however, is the quest for new varietals.  Global warming is wreaking havoc in Bordeaux.  Researchers are experimenting with <50 new varieties.

The Wine-Knows' harvest tour begins tomorrow.   None of the participants have ever been to Bordeaux so they won't be able to totally recognize the incredible metamorphosis.  One of my jobs, henceforth, will be to ensure they appreciate the transformation of a once ugly step-sister into a glam-Cinderella.

Posted by June Forkner-Dunn, PhD at 4:13 PM No comments:

We're in Spain drinking more than our share of Cava.  But, Cava is ubiquitous for today’s wine lover…whether one is in Athens, Rio, Honolulu, Berlin, the Big Apple, or Sydney you’ll most likely run into a glass or two of it.  Below are some key points about this affordable, fresh and fruity bubbly.

Only sparkling wine made in certain villages in Spain can be called Cava.

While 90% of Cava is made in the region near Barcelona, there are several other geographical areas in Spain that are allowed by law to make Cava (e.g. the Rioja).

Only sparkling wine made in the same method as French Champagne can be called Cava.

Champagne is made using the methode Champenoise (a second fermentation occurs in the bottle when additional yeast is added).  Only wines from Champagne, however, can use these words to market their wine.  While Cava is produced using this same process, by E.U. law the Spanish bubbly must use the phrase “Metodo Tradicional” (traditional method).

Like most Champagne, Cava is also a blend of grapes.

While Chardonnay & Pinot Noir are the main blending grapes of Champagne, Parellada and Viura are the main grapes of Cava.  In both countries, each varietal adds a certain something to the blend.  For Cava, Parellada adds body to the lighter bodied, high acid Viura.

Who are some of the best producers of Cava?

These smaller producers are worth seeking out:  Gramona, Kripta, Castell Sant Antoni Torre de L’Homenatge, and Valdoserra MS.   Their Cavas range in price from $20-$50 and some of them could compete mano a mano with many Champagnes.