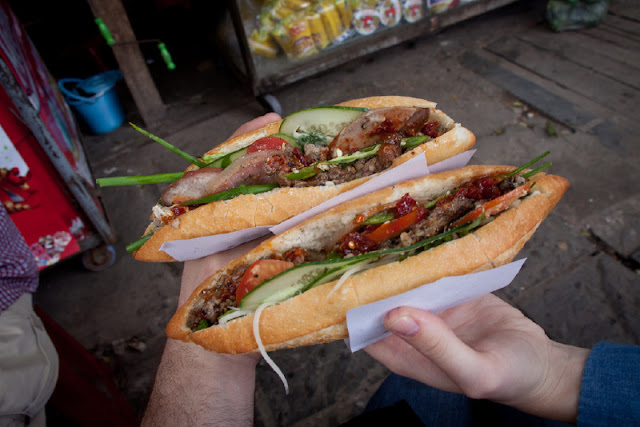 I order mine with "the works"

Anthony Bourdain said this sandwich shop was the best in Vietnam….I say it just might be the best in the world.   Google banh mi and in a nano second you’ll get >36 million hits.  Bahn mi has become an international culinary hit.  There are now banh mi cookbooks, YouTube videos on tapas of banh mi, recipes for banh mi burgers and even banh mi pizza.  So, listen up when I say I know where the best banh mi on the planet is. 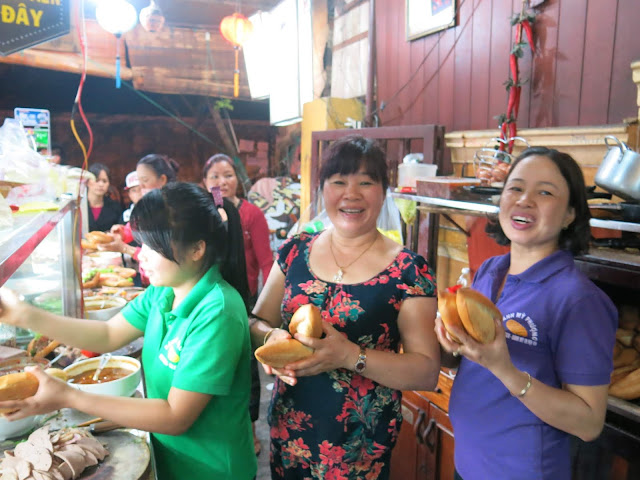 Let’s start at the beginning.  Banh mi actually means bread.  The French brought their beloved baguettes to Vietnam in the late 19th century.  The baguettes, made from expensive imported wheat, were affordable only to the French.  Once the French were kicked out of Vietnam, the Vietnamese began adding rice flour to the baguette, making it more reasonable in price.   The defeated French left behind warehouses filled with pâté, cheese, mayonnaise and expensive cold cuts which were all sold at rock-bottom prices in the local markets.  The Vietnamese, out of disdain for the French, began to eat these once forbidden products.  Out of spite and to flaunt their independence, the Vietnamese then began experimenting with local products as ingredients for the baguette. 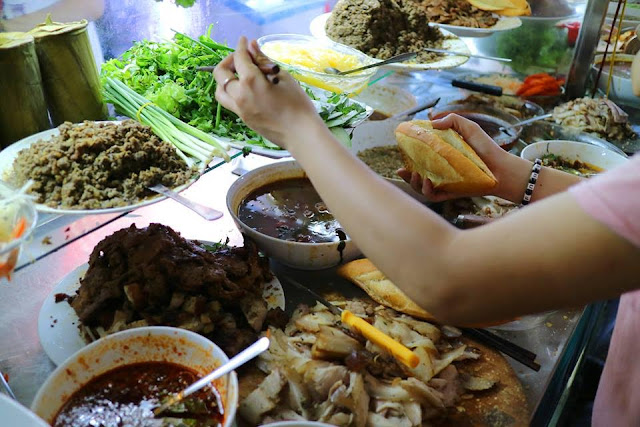 The actual banh mi, however, wasn’t birthed until the late 1950’s in Saigon.  Long before plastic and Styrofoam made everything portable, an ingenious couple who had fled north Vietnam to the southern capital, thought of making individual baguettes and filling them with a the Vietnamese version of pate, mayo and pickled vegetables.  They revolutionalized eating on the go in busy Saigon with their new sandwich as it could be carried away by customers in their hands. 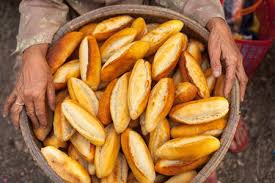 Dove-tailing with the banh mi’s invention in Saigon during the mid 20th centry, the Americans also helped the success of banh mi.  During this period the US began sending wheat shipments which allowed the baguette industry to flourish.  By this time, the Vietnamese were also changing---they had become adept at making pâté from pork, adapting the Chinese version of BBQ to a local recipe, and were even making their own mayonnaise. 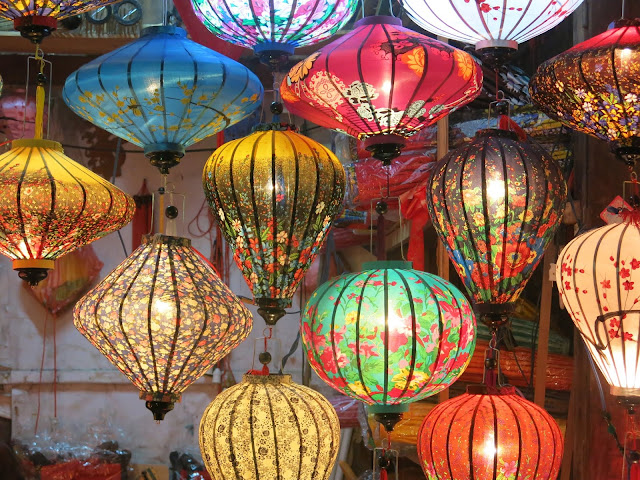 Hoi An is also famous for its gorgeous silk lanterns

So, where is the world’s best banh mi?  It’s located in the UNESCO (United Nations World Heritage Site) seaside town of Hoi An.  There are at least ten ingredients, all of them working in total harmony:  a thin layer of aioli, a splash of the au jus left over from the roasting of the meats, a spreadable house-made pâté, BBQ pork, sliced tomatoes, pickled carrots and daikon, thinly sliced cucumbers, fresh cilantro, and finally a dab of fish sauce mixed with chili for the perfect kick. 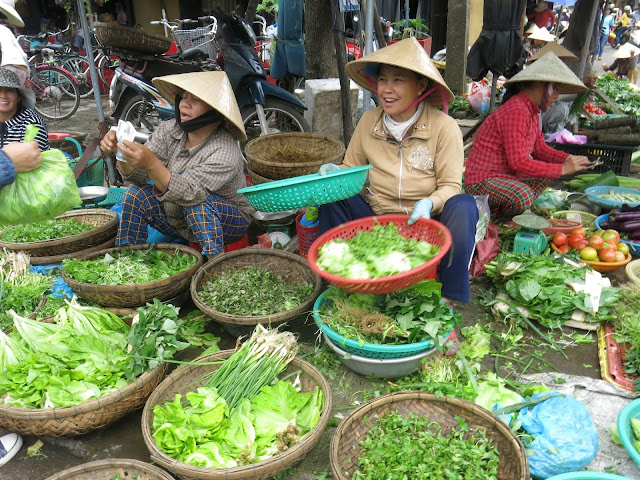 If you’re coming with Wine-Knows in February 2020 to Vietnam you’ll be eating the Holy Grail of banh mi at this little dive of gastronomy.  There is one or possibly two spots remaining on this trip. http://www.wineknowstravel.com/itinerary-vietnam/.  If you’re not coming, the name of the place is Banh Mi Phuong….expect a line out the door, and be sure to order “the works.” 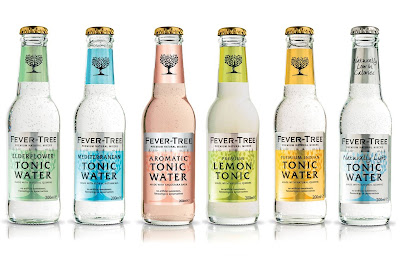 Wine-Knows is wrapping up its inaugural wine and foodie’s tour of England.  In addition to visiting a gin factory, we have certainly sampled our share of gin and tonics on the trip.  While I’ve long known that the quality of both gin and the quality of the tonic were important, I’ve learned a lot about what gin works best with what type of tonic.  Let me explain.

First, let me say that I’m a big fan of Fever Tree Tonic thanks to my friend Liz who introduced me to it a few years back.  What I didn’t know until some months ago is that Fever Tree is made in London.  I learned on this trip that Fever Tree actually makes six types of tonic.   By doing a quick online search on the laptop I brought with me, I found them all available in the US. 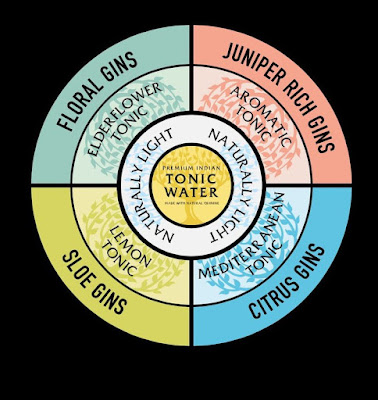 So here’s the low-down.  Take a look at the picture above.  According to Fever Tree, here are the best pairings of Fever Tree with different gins (all of my favorite gins).


Check out Fever Tree’s website for which of their products pair best with your fave gin: 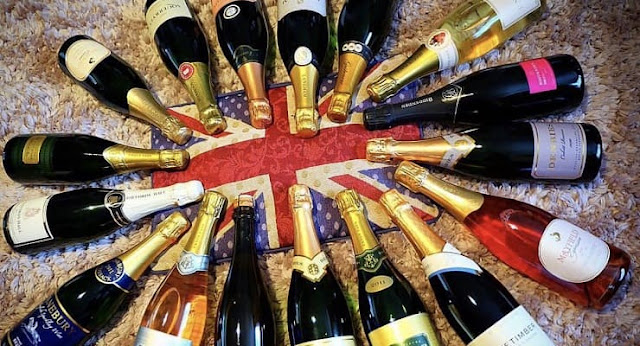 Gin is now being replaced with world-class sparkling wine

Global warming has changed England’s presence in the wine world.  The Brit's wine country is located at the same latitude as France’s Champagne district and warmer global weather conditions now make the island’s weather comparable to Champagne.  England's sparkling wine countryside also has the same limestone soil as Champagne.  All of this means that England is now making sparkling wines that have beat-out many high-end Champagnes in blind tastings.

Few English sparklers are imported into the US.   England’s fizzes (as they are called), are the same price point as the real-deal Champagne, thus marketing the British fizz is problematic as England’s wine industry is in its infancy and few people in the US know of its quality.  Those coming with us on the inaugural English countryside tour in June will be among the first wine groups to make the trek across the Atlantic. 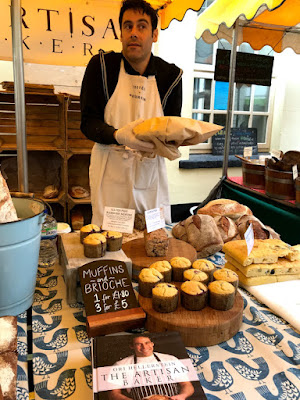 England formerly has not been thought of a foodie’s mecca either.  That also is changing.  Farmer’s markets now abound and there’s a huge movement away from the former bland, frozen and uninteresting cuisine to a more global cuisine based on fresh ingredients and enticing flavors.   Fusion is the name of the game with old time recipes being modernized to incorporate tastes of France, Italy and Asia. 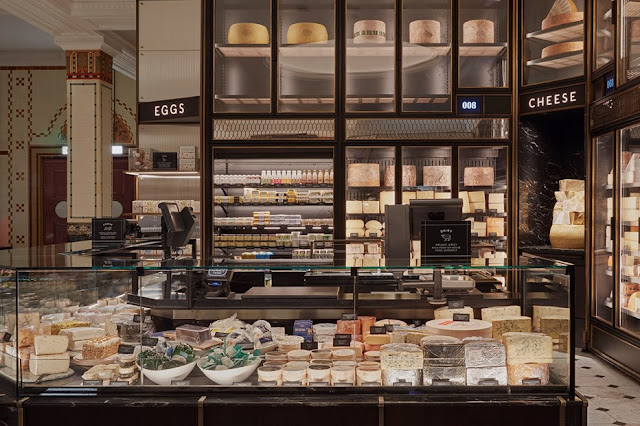 India has long been an influence in England’s restaurant scene.  In fact, there are more Indian restaurants in London than in Mumbai and Dehli.  This means that gourmet food emporiums such as London's Fortnum Mason or Harrod’s have gigantic sections of Indian spices.  I always bring home tins filled with curry ingredients. Regardless of whether you like Indian food or not, these two temples of gastronomy’s fabulous Food Halls should not be missed by any food-lover.

Another item I can’t resist at Harrod’s or Fortnum Mason is their over-the-moon selection of Stilton cheese.  Blue Stilton is perhaps England’s greatest gift to the culinary world.  Both stores carry it vacuum packed for the flight home, but it also is available in pretty ceramic crocks that are a lovely souvenir.

Both Fortnum Mason and Harrod’s also have mind-blowing tea departments.  Tea time in Britain is nearly a national institution.  There are hundreds of flavors available and their marvelous packaging would make even the Queen smile. 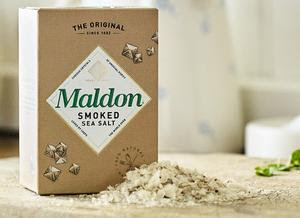 Maldon is one of my favorites

Another easy souvenir to bring home from England (or order on the Internet) is Britain's Maldon Sea Salt flakes.  It comes in several “flavors” but I usually gravitate to the smoky version.  Think France’s Fleur de Sel with an interesting smoke nuance.  As its lightweight, it makes a perfect item to bring home as a gift for another food-lover.

England is no longer a gourmet dessert and its southern coast's sparkling wine industry is growing exponentially.   British chef Gordon Ramsey has reached nearly rock-star status in the US.  English Michelin star restaurants abound.   To that I say, “Cheerio, mate!” 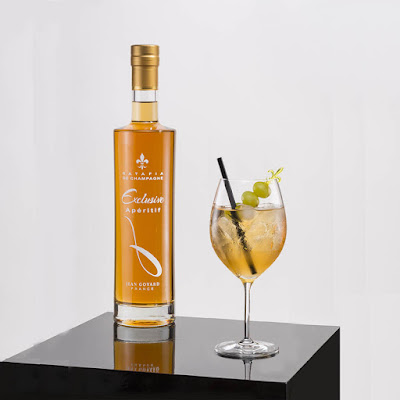 Ratafia and tonic just might become the new "in" drink

There’s a “new” old kid on the block in Champagne.  Ratafia de Champagne dates back eight centuries but it is now making a comeback.  Recently, the alcoholic drink was given a protected status by the French Government and it will have its own appellation.  So what is this Ratafia?

Ratafia de Champagne (as it is now legally called to protect the brand from being made only from grapes grown in the Champagne district of France), is made from the three grapes allowed by law in Champagne:  Pinot Noir, Chardonnay and Pinot Menuier.  But, there’s a catch—Ratafia is always made after the grapes have been pressed to make the pricey bubbly.  The grapes are then pressed for a third and fourth time and this last pressing of semi-unfermented grape juice is then fortified with brandy. Voila…Ratafia de Champagne!

As the addition of brandy during fermentation halts fermentation (where sugar is converted to alcohol), Ratafia de Champagne has both residual sweetness, as well as an alcohol level of about 18%.   It is served cold, often as an aperitif, however, it can be served in lieu of Sauternes with a foie gras as a first course.  Ratafia can be also used as a dessert wine, or even in cooking where it can work magic with delicate sauces.

Ratafia de Champagne obviously has no fizz, but it does have beguiling aromas of candied fruits and honey.  Some compare it to a Tawny Port.   Like Port, it can keep in the frig a month after opening.  Although there are about 100 producers of Ratafia, each winery produces very little.  It’s a miracle to see a bottle in the US as it rarely makes it out of the Champagne region…and if it does, it’s seen in the top restaurants of Paris.  The potential for Ratafia’s growth is huge, and Champagne Houses are expected to ramp up production.

Coming with us on the sold-out trip to Champagne in June?   You’ll be the first Wine-Knows to taste the new-old kid on the block!