Gardens are now filled with green tomatoes and I've got just the dish for you.  Like many of us, my first introduction to fried green tomatoes was its namesake book published in 1988 and the popular movie that followed.  For the last 30 years I’ve ordered these southern culinary morsels in Atlanta, New Orleans, Savannah, Charleston, Williamsburg, and all points in between… including Appalachia.  If they were on the menu (and even if they weren’t), they were my go-to dish.  Few times have I been disappointed.

Fried green tomatoes scream quintessential Old South….or so I thought.  My recent trip to rural Georgia piqued my curiosity on exactly how this scrumptious Southern signature dish originated.  After some research, I was shocked at what I found.  I think you will be, too.

Unripe tomatoes are used because they haven't developed juice or sweetness

According to noted food historian Richard Moss, fried green tomatoes are Yankee imposters.  In his book, The Fried Green Tomato Swindle & Other Southern Culinary Adventures, Moss discloses that they may have been introduced to the US by Jewish immigrants in the Northeast or Midwest (recipes began appearing in American Jewish cookbooks as early as 1919).  But, wait a minute as there’s another theory on the origin of fried green tomatoes.  The LA Times published a recipe for them in 1908.   Indeed, Californians were eating them eight decades before the movie!  This makes total sense as California is the largest tomato producer. 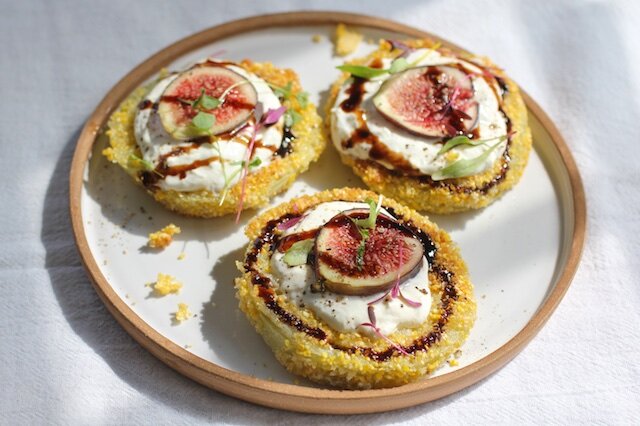 Fried green tomatoes are versatile:  this version is topped with burrata & fig with a balsamic drizzle

Surprisingly, the seemingly Southern classic fried green tomatoes didn’t make it to the South until after the movie.  There’s not a trace of them in Southern cookbooks before the 1980’s.   That being said, the South has fervently adopted this dish like no other region of the country.  On my recent Georgia trip, they were represented in some form on every single menu.  There was a standout rendition, however, heads and toes above all of the others.

Savannah’s Pink House, one of the South’s bastions for gastronomy, has long been a favorite of mine, and their rendition of fried green tomatoes is one of Georgia’s culinary masterpieces!   Food TV star, Aaron Sanchez, lists among the “best things I ever ate” a Fried Green Tomato BLT Salad from the Pink House.   I have dreamt of this salad and the stunning setting in which it is served since I first had it ten years ago.  (The beautifully coiffed building, which served as the headquarters for General Sherman, is a National Landmark offering all the glitz and glamour of pre-war Gone with the Wind). 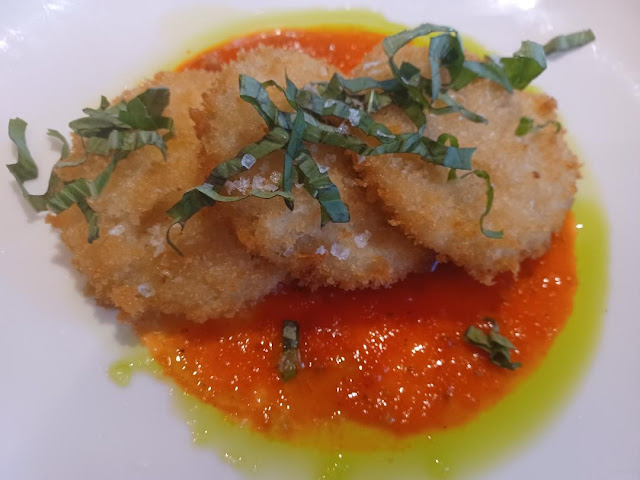 If you’re one of the Boswell Scholarship recipients coming on the private Scholar’s trip to Georgia, you can be assured fried green tomatoes will be on most of our menus.  And, the Pink House’s BLT salad interpretation will surely convince you that even though the South didn’t invent fried green tomatoes, Southerners have drawn it into their culture like a bee to honey.