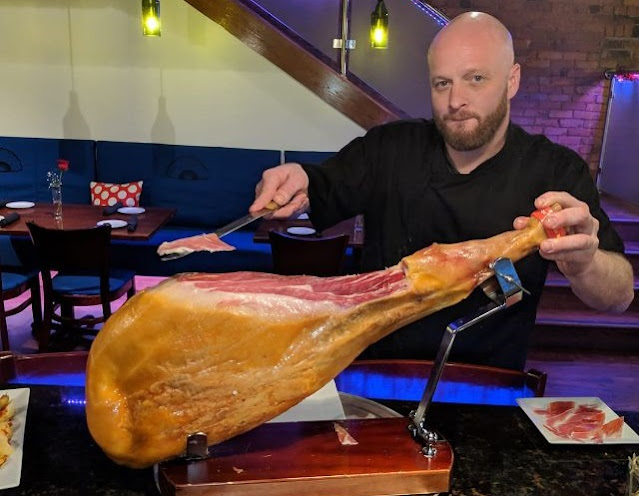 Spain's ham is coveted by gourmet chefs around the globe

When it comes to food from Spain, there is nothing more classical than Spanish ham (jamón).  Take it from someone who eats very little red meat, Spanish hams are nothing short of magnifico!  And, they are not even remotely related to any ham we have in the US.  This is because the process of producing ham in Spain is very different.  It’s not only lengthy (can take up to three years), but there are technical differences such as labor- intensive traditional curing methods which have been handed down from generation to generation.

Spain’s connection to pork can be traced back to its rural past.  Pigs were extremely important in country villages….so important that they could literally determine the fate of poor farming families.   Once the pig was ready for butchering, not one part of it could be wasted.  Refrigeration only came into being in the late 17th century; prior to that Spaniards had to have a way of preserving meat from ruin.  Out of necessity began the process of curing ham and this very method is still used today. 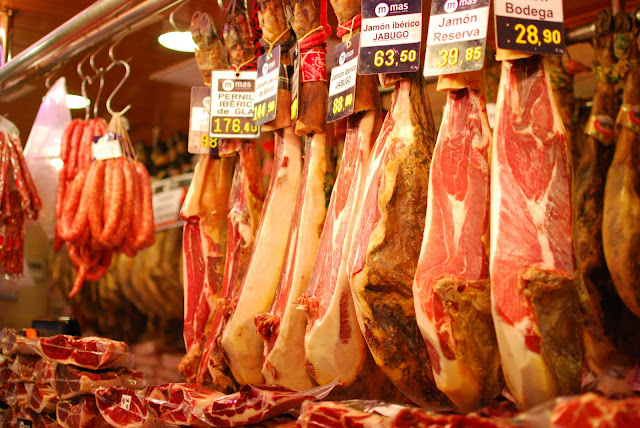 The top quality Iberico ham can be *mucho* expensive
Approximately 40 million hams per year are produced in Spain.  They are a mainstay on any Spanish table.  There are two different categories of ham:

Jamón Serrano, which literally translates to “ham from the Sierra mountains,” is from the white pig.   This hybrid pig (a mix of centuries of a variety of mountain pigs) produces a good ham which is reasonable in cost.  Serrano ham accounts for the nearly 90% of ham sold in Spain.  Its aging time is a maximum of 15 months.

Jamón Ibérico, “Iberian ham” is from a pig that is thought to have been introduced to Spain by the Phoenicians nearly 1,000 years BC.  This ancient pig then interbred with Spanish wild boars resulting in a darker color breed.  Spaniards call this pig Pata Negra (black hoof).

There are actually three levels of Jamón Ibérico which are categorized in accordance with quality based on the pigs’ diet: 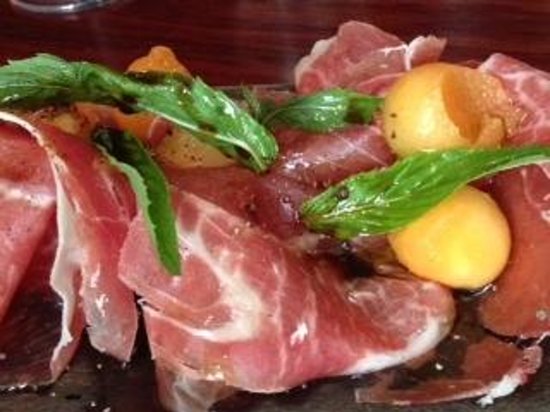 Jamón Iberico de Cebo with melon & mint is a perfect starter (or *is* the meal!)

The actual process of preserving ham in Spain is a dry-curing one---hams are hung in the open air for as much as five years for the country's finest quality.   It also involves salt, water, patience, humidity, varying ambient temperatures, and time.  Hams are dried and matured according to actual laws for aging minimums.   Unlike Italian prosciutto, Spanish hams are not covered with any other external ingredient other than salt in the very beginning. 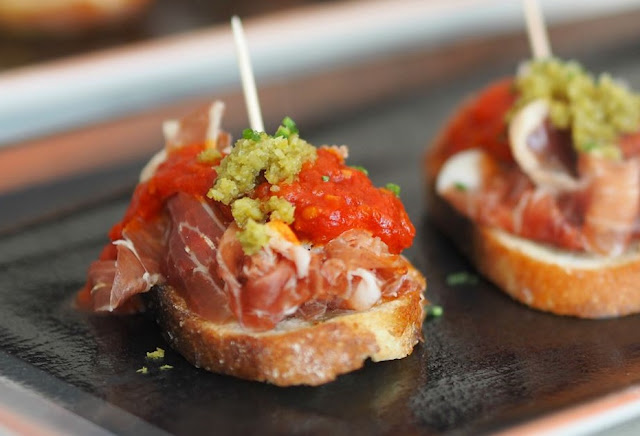 Spanish ham is some of the best cured meat in the world.  Wine-Knows will be sampling all types of jamón on its two trips to Spain this September and October.  Travelers to the island of Mallorca (only 2 spaces available) will try jamón tapas, and those attending the Granada & Seville trip (4 spaces)  will taste both Jamón Ibérico and Jamón Serrano.