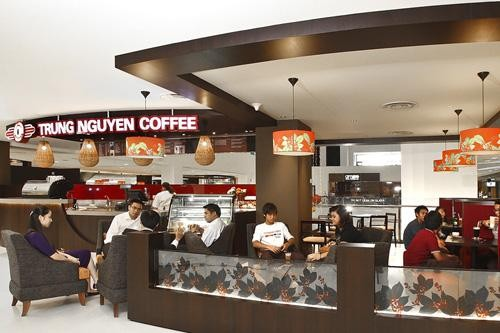 Vietnamese coffee emperor, Trung Nguyen, has amassed a fortune >$250 Million USD
On my inaugural trip to Vietnam, nearly a decade ago, one of my first memories was the country’s marvelous coffee.  After a long international flight and an iffy night’s sleep in Hanoi, I remember heading down to the hotel’s breakfast room where I found my three girlfriends guzzling pots of this coffee…and all raving about how good it was.  I’m very picky about my coffee so I proceeded with some trepidation.  I was hooked at the first sip---there was something really compelling about Vietnam's coffee.

When breakfast was over I asked the server what brand it was and where I could buy it.   Seems the coffee Gods were looking down on me as the hotel staff agreed to actually sell me a bag.  The only issue was that it only came in large commercial packaging.  No problem.  I bought the equivalent of ten pounds and carried the beans throughout Vietnam, then on to Australia, and then finally back to the US.  I never regretted lugging a single coffee bean.  This stuff was the bomb!

Coffee was brought to Vietnam in the 1800’s by the French who colonized it until the 1950’s.  Today, Vietnam is the second largest producer of coffee on the planet, surpassed only by Brazil.   Walk around downtown Saigon and you’ll notice immediately that coffee is big business:  modern coffee houses abound and are loaded with upmarket crowds, and retail shops selling everything from clothing to electronics even have large displays of packaged coffee for sale. 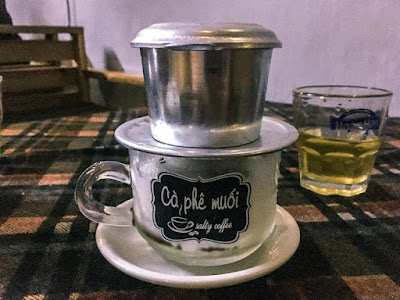 There is something very different about Vietnamese coffee.  When I first tasted it I remember being surprised by nuances of chocolate and even some nuttiness.  (BTW:  I’m not one for any type of flavored coffee.)   I’ve since learned that there is a miniscule amount of chocolate added (0.1%) but the real difference is that Vietnam grows an entirely different bean and processes in a different manner.

Most American coffee uses the Arabica bean, Brazil’s Holy Grail.  Vietnam, however, uses the more earthy flavored Robusta bean.  (Italian espresso often contains Robusta in the mixture of beans to provide a full-bodied drink.)   Like espresso, Vietnamese coffee contains a lot of caffeine…more than that made from the Arabica bean.  But, it’s not only the bean that makes the difference.  Vietnam roasts its beans at very low temperatures over a long period of time, allowing them to develop complex flavors.

Yesterday I arrived back in my beloved Vietnam.  This trip there will be no need to purchase a suitcase full of coffee as it’s thankfully now available in the US compliments of Trung Nguyen, Vietnam's international coffee mogul.  Seems I’m not the only one who is hooked on this enticing beverage.  Trung Nguyen, a multi-millionaire, now exports it to over 30 countries.