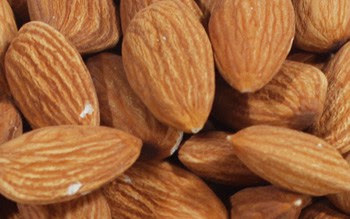 Almond-like flavor is a classic profile of Champagne

This is the final in a four part series on the aromas and flavors of wines produced by chemical reactions during the fermentation process.  In review, we’ve discussed the buttery profile caused by the conversion of harsh malic acid to the softer lactic acid.  Next, the science behind a variety of fruit flavors in wine was detailed, followed by a discussion of the chemistry behind grassy aromas and smells.   This final blog will address another flavor component caused by a chemical reaction during wine-making.  It will also discuss other common flavors present in wine that have nothing to do with the fermentation process, but everything to do with the oak barrel.

Almond nuances are classically associated with sparkling wine.  This almond profile is caused by the release of a chemical component produced by yeasts during fermentation.  Sparkling wines that have rested “on their lees” (i.e. had contact with the dead yeast cells) often have almond aromas and flavors due to the chemical compound benzaldehyde.  This chemical actually has an almond aroma.  Wines that undergo batonnage (frequent stirring and mixing of the lees) also exhibit almond tones.

A final note of clarification:  not all aromas and flavors in wine, however, are related to chemicals produced during fermentation.  Oak barrels can play a huge part in influencing both a wine’s smell and taste.  The following are examples of chemicals in oak that can alter the taste and smell of wine:
In summary, there are hundreds of chemicals found in wine.  Some occur because of chemical reactions in fermentation; others are present due to other factors (such as the use of oak).   What is interesting to note, however, is that most of these chemicals do not reach the threshold of one being able to distinguish them.  The majority of people have an average threshold for tastes and smells.   However, there are some people, who have a more sensitive threshold and may be able to distinguish tastes and smells more readily than others.