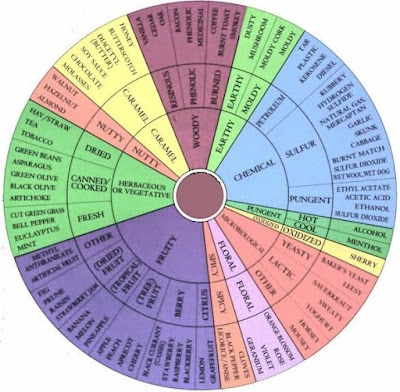 Why in the world does a wine taste or smell like any fruit other than a grape?  This is the second article in a blog series on the science behind certain flavors and aromas in wine.  This particular article will discuss three fruit flavors/fragrances that can appear in wine.  In fermentation, yeasts eat the sugar in the grapes and convert it to alcohol.  In this process thousands of various chemical compounds are produced.  All three fruit flavors below are a result of these complex chemical processes.

Banana
The banana-like smell and taste is a result of a chemical compound by the name of isoamyl acetate, a by-product of yeasts during fermentation.  The isoamyl acetate also occurs naturally in the banana plant, as well as in pears.  It is present in most wines, however, it is below the threshold of one’s ability to taste it.  It should come as no surprise that artificial banana flavoring is made from isoamyl acetate.

This banana smell and taste can appear in both white and red wines.  Aromatic white wines that are fermented at cooler temperatures (lower temperature enhances the amounts of isoamyl acetate) often display ripe banana notes.  For example, that banana nuances can often be found in Chardonnay, Pinot Gris and Albarino.  Beaujolais is one of the few red wines that has a banana profile.

Green Apple
This flavor and smell profile found in wines is due to the lactic acid which is created during malo-lactic fermentation.  Lactic acid gives off green apple-like scents and flavors, in addition to a creamy mouth feel.  Wines that have pronounced green apple character are classically cool climate dry whites such as Chardonnay, Riesling and Gruner Veltliner.

Gooseberry
Like green apples and banana nuances, this flavor and aroma is not part of the grape.  Gooseberry is created during alcoholic fermentation and is a by-product of yeast activity.   This fruit is typically less sweet so its taste is on the tart side (think pucker),  but gooseberries can also have a slightly floral scent.  Generally found in aromatic whites, gooseberry is classically associated with Sauvignon Blanc (particularly those from cool weather regions such as coastal New Zealand, or France’s Loire Valley).

Keep in mind that each person has a different innate level of tasting various substances.  It doesn’t matter what you taste or don’t taste in a wine.  The only thing that counts is if it pleases you.