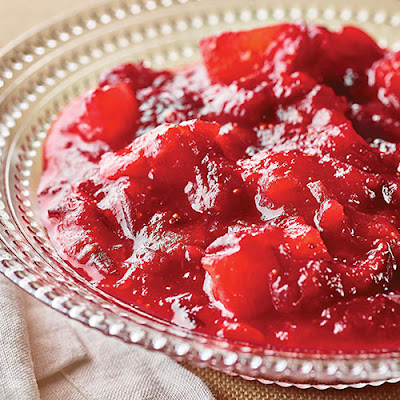 Nearly 40 years ago a dear foodie friend of mine shared her recipe for an ethereal cranberry sauce which she had learned in a San Francisco cooking class. (Thank you, Beth Izmirian).  It’s been on every Thanksgiving and Christmas table of mine ever since.  The recipe was developed by the culinary luminary Perla Meyers.  Perla was not only one of the pioneers of farm-to-table philosophy, but authored nine cookbooks over her illustrious career during the 1970's-90’s.

So what makes this cranberry condiment the best on the globe?   One of the reasons is that it has both apples and pears which give it great texture (plus these fruits add depth of flavor rather than a one note cranberry).  Another is the plumped raisins which offer a lovely sweet contrast to the tart cranberries.  The fresh squeezed orange juice, zest, and the Grand Manier further infuse multi layers of orange.  The last reason it tops the best-ever list is its color.  Humdrum cranberry sauce is all one color (also only one flavor profile).  The world’s best, however, offers a wide assortment of color due to the lighter colored apples and pears, as well as the golden raisins or the dark currants.

Recipe inventor Perla Meyers actually named this dish a cranberry chutney.  While chutney doesn’t quite ring true for me (they are spicy and/or have vinegar), I still refer to it as Perla intended out of homage to this extraordinary food personality.  The chutney keeps for a couple of weeks in the frig, and if there is any leftover (usually not) I serve it on top of a log of goat cheese…it’s magical and colorful pairing for a holiday appetizer.


Cook the first six ingredients in a sauce pan over medium heat for 30-40 minutes (add currants/raisins during the last 15 minutes of cooking). Remove from the heat and let cool for approximately 30 minutes.  Last, add the Grand Manier.

Enjoy the world's best, and have the best-ever Holiday Season.