The Spicy Condiment of Vietnamese Heritage 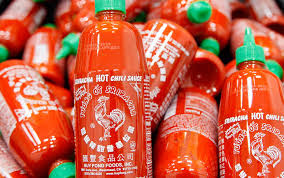 What foodie hasn’t heard of Sriracha (see ROTCH ah)?  Not only does this condiment appear on nearly every tabletop of most Asian restaurants in the USA, but it has also worked its way into main-stream culinary America.  There are now Sriracha-flavored potato chips, both Sriracha mayonnaise and mustard, as well as Sriracha jerkey and Sriracha popcorn.   Almost unbelievably, there is now even Sriracha lip balm for sale.  How many knew the Sriracha empire was started by a Vietnamese immigrant?

In the late 1970’s a former major in Vietnam’s southern Army immigrated to the Los Angeles area of California.   He was disappointed to not find the traditional hot sauce he had so loved in his native country.   On a shoestring budget he decided to make his own.  In a broken-down Chevy van he began peddling his concoction to the large community of Vietnamese via their local markets and restaurants.  The rest is history.

His family-run business, Hay Fong Foods, now employs over 200 people and has sales in excess of $60 million.  Named after the boat on which he escaped from Vietnam nearly 35 years ago, Hay Fong’s Sriracha was named at Bon Appetit’s “food of the year” in 2010.   The company has never advertised.  But, the company also never trademarked the name Sriracha and that has proved quite problematic.  While Hay Fong’s iconic packaging is easily recognized for its clear plastic bottle showing its bright red contents along with rooster logo and bright green squeeze-bottle top, it has come under fire from competitors.  It seems everyone is now making Sriracha and knock-offs fill supermarket shelves.

I just returned a few weeks ago from Vietnam with a Wine-Knows group.  There were no bottles of Hay Fong Food’s Sriracha on the tables, however, most restaurants had a similarly colored bottle of equally high-octane sauce tableside.  As I sampled each,  I couldn’t help but think of the perseverance and drive of the USA’s creator of Sriracha----a tribute to the hard-working people of his beautiful homeland.