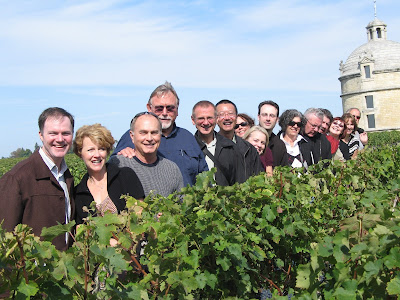 Wine-Knows at Chateau Latour surrounded by Cab Franc
I’m Francophile…in this case, I’m referring to my love of Cabernet Franc, not my love of France.  One of the five grapes allowed in Bordeaux’s world-class reds, this close relative of Cabernet Sauvignon adds rich notes of raspberries, black currants and violets to this benchmark area’s blended wines.  Cabernet Franc is also less tannic and produces a smoother mouth-feel than Sauvignon---both of these essential to the complex red wines of Bordeaux.  Cabernet Franc, on the other hand, is not just a Bordeaux grape.  The varietal truly takes on rock-star status in another area of France, the Loire Valley.  Here it is vinified as a 100% varietal wine and is known as Chinon, Saumur or Bourgueil.

Cheval Blanc, one of Bordeaux’s most highly esteemed estates, produces one of the world’s most expensive wines----it is 100% Cabernet Franc.  Need I say more? If you don’t know Cabernet Franc you should make it a point to exercise this  muscle.  Recommended producers, listed in order of price, include:


Coming to Bordeaux with us for the 2016 Harvest tour?  You will learn a lot about what Cabernet Franc adds to the area's hallmark wines.   There is only one spot remaining for some lucky oenophile.  For more about this trip, check out
www.WineKnowsTravel.com.