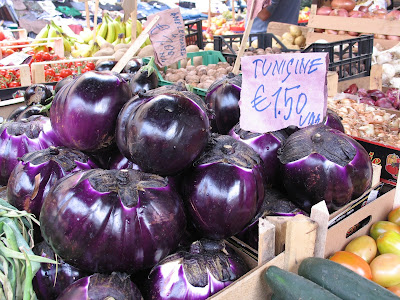 October is idyllic in Sicily.   While summer is Dante’s inferno-hot and mega-crowded---especially in popular tourist spots---October brings cooler temperatures, as well as significantly fewer crowds.  The grape harvest begins in August and the picking continues through September.  In October wineries are in full swing with the new vintage—for an oenophile, it’s the perfect time to visit.  If you’re coming on the 2014 October tour we’ll be staying at one of Sicily’s most revered wine estates and we’ll have ample opportunity to watch up close all of the processes involved in making a wine.  But, wine is just one of the many culinary abundances of Sicily in the fall months.

Sea salt from Sicily is highly-prized.  The harvest begins in August and continues through early October.  Fall also is the season for Sicily’s pistachio and hazelnut harvest...these nuts frequently appear in Sicily’s traditional handed-down-over- generations dessert recipes.   But, perhaps the most famous of all of the Sicilian food products produced during the fall months is its olive oil.  The group visiting Sicily with Wine-Knows next year will be staying on an olive estate, and you will have the option to participate in the harvest and make the oil.

Sicily’s fall vegetables read like a who’s who of its gastronomic world.  Eggplants, onions and an array of peppers in red, oranges and yellow compose the holy trinity of fall dining.  One of the island’s most famous dishes is caponata (the Sicilian version of ratatouille.)   Sicily’s rendition includes capers, another jewel in the island’s culinary crown.  Sicilian capers, preserved in local sea salt, are coveted by Michelin star chefs around the globe.   Last, we can’t discuss Sicilian cooking without discussing tomatoes.  Early fall brings over-flowing market stalls full of vine-ripened heirloom tomatoes.  Late fall ushers in the year’s crop of sun-dried tomatoes that are used throughout the other seasons in many of Sicily’s classical dishes.

Stay tuned for the upcoming blog posting on Sicily’s capers.…once you’ve tasted their salted version, you’ll never return to the brined capers popular in the US.

Viva Sicilia!
Posted by June Forkner-Dunn, PhD at 1:00 AM