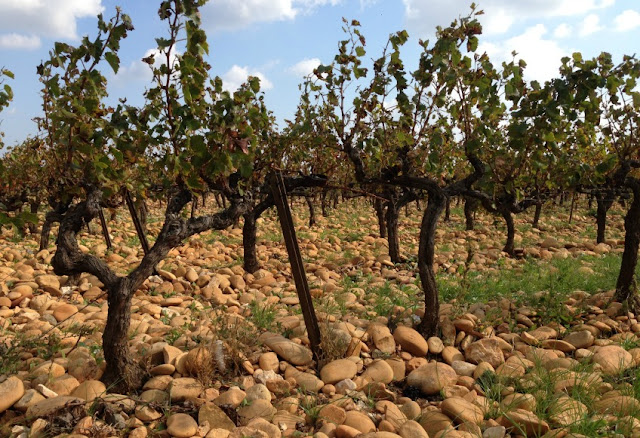 This is a second article in a two part series on France’s world-class Rhone Valley wine district.  Today we travel to the southern sub-zone of the Rhone.  Many readers may know this southern area because of its famous wines from the town of Chateauneuf-du-Pape.

The southern Rhone terroir is different from the cold, harsh north.   The Mediterranean Sea exerts a tremendous influence by moderating the south’s temperatures.  Winters in the south are far less dramatic, and southern summers are hot but cooled by the effects of the Mediterranean.   Large rocks washed down over the millenniums from the Alps and other mountains by the Rhone River, also help with the climate:  retaining heat, they provide warmth to vines on cold nights.  Their smaller pebbles create excellent drainage.

While Syrah is supreme in the northern Rhone, the big kahuna red grape of the southern Rhone is Grenache.  While Grenaches comprises nearly 70% of the south’s vineyards, there are several other red varietals allowed by law.  All southern Rhone wines are blended.    While wines are mainly Grenache, a little Syrah is added to for its color and spice, as is Mouvedre which adds structure and elegance.  The southern Rhone blend of Grenache, Syrah and Mouvedre is so popular that it is frequently called simply GSM.  This famous blend has been replicated around the world.

The southern Rhone’s Holy Grail appellation is Chateauneuf-du-Pape (“the Pope’s new house,” named so after the papacy was move from Rome to this area in 1309).  These wines are some of the most seductive I know.  Like all southern Rhones, they are Grenache-centric, however, similar to the northern Rhone, laws allow for combining both red and white grapes.  GSM is strongly represented in the mix, but there are also some white grapes added in small amounts.

While red wines are the majority produced in the southern Rhone, opulent whites are also made.   They are scare but, oh, but they can be divine.  Made from unknown varietals like Ugni Blanc, Clairette, Grenache Blanc, and Picpoul (along with Roussane and Marsanne), a white southern Rhone from Chateauneuf-du-Pape can be a religious experience.

Pop a Rhone wine to celebrate the weekend!