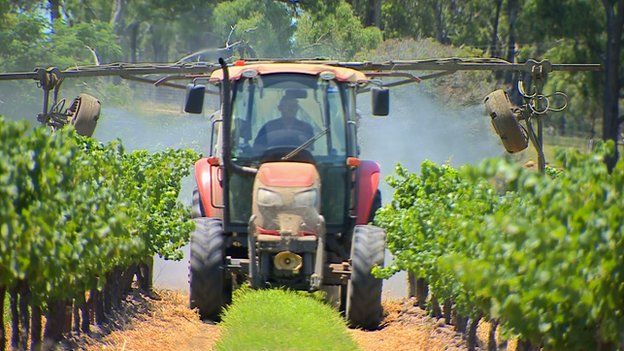 Climate change is creating huge problems for the world’s wine industry.  Warmer temperatures are altering how and where grapes are grown, the quality of wine, and are testing the world’s iconic wine regions on whether they can find ways to adapt.

Many factors can influence a wine's taste profile and warmer temperatures are already altering aromas and flavor notes.  Hotter summers makes for shorter growing seasons.  This means that grapes ripen more quickly with sugars, but not all ingredients in the grape are ready.  For example, a well balanced wine requires an equilibrium of acidity and ripeness.   This perfect symbiosis is more difficult to achieve in global warming, as are other nuances that go into making a wine complex.

Due to concerns of global warming, Bordeaux several years ago began experimenting with cooler climate varietals.  Researchers are testing a large number of grape varieties that ripen earlier.  Malbec, once one of the main grapes of Bordeaux, was destroyed by the Phylloxera bug in the late 19th century.  Cabernet and Merlot were replanted in its place.  Scientists now, however, are taking a second look at Malbec in Bordeaux.  With warmer weather, Malbec may be a good candidate as it could now ripen more consistently and avoid the issue of mildew.

Intensifying temperatures are not just troubling Bordeaux. In Australia where temperatures have risen to more than 110 degrees in summer, they are using sunscreen on the grapes to protect them from intense rays.    Many international vintners are experimenting with watering systems and shade strategies.  Others are hoping technology can help with a solution.  Many, are buying land in cooler climates.  Some of Europe’s biggest wine producers are buying land in the foothills of the Pyrenees, in the cooler part of China, and in southern England---where the climate now resembles France’s Champagne region of fifty years ago.

On a recent trip with Wine-Knows this last autumn, we heard stories from many Barolo and Barbaresco winemakers about the warming trend.  One that sticks out in my head is a tale by a 50 year old winemaker.  When he was a young boy, the harvest of red grapes was always mid-October, give or take a few days depending on mother nature.  When he was in his twenties, the fruit ripened in late September.  This last harvest his winery began bringing in grapes in late August.

Let's all do our job to prevent global warming worsening.