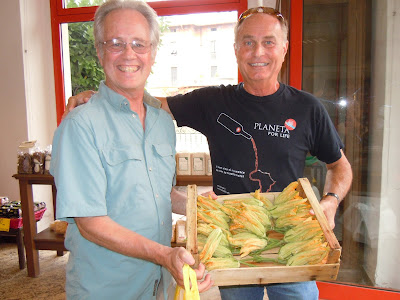 Somehow the 4th of July always marks the beginning of summer for me.  Luscious tomatoes are available in nearly every color of the rainbow, stone fruits are at their prime, wonderfully ripe melons abound, and farmers markets are over-flowing with zucchini flowers.   Over thirty years ago I fell in love with zucchini flowers on the island of Capri in Italy.  In fact, after having been served them one night for dinner, I so fell in love with them that I signed up for a cooking class at the restaurant during the week that I was there just to learn the chef’s secrets for zucchini flowers. 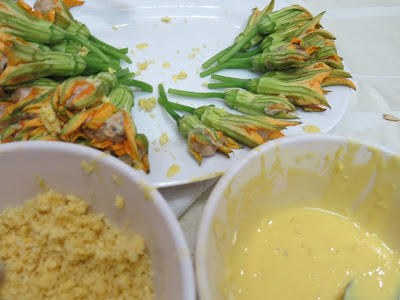 The Vietnamese version was dipped in batter and then panko

Since that time I’ve had zucchini blossoms prepared in several different ways and in several different countries.  On a recent trip to Vietnam I was served them in a family’s home.   Stuffed with minced pork and fried in a coconut-milk batter, they were sublime.  In France I’ve had them stuffed with goat cheese in a Michelin-star restaurant, and filled with scallops in another.  Both French renditions were baked and then topped with an ethereal sauce. 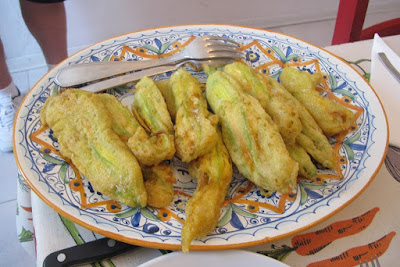 My favorite way to this day, however, is the way in which I was initially served them in Capri.  Over the years I’ve tweaked the recipe to resemble a more tempura-like batter by using cornstarch.  I’ve also lightened up the batter (and added to the taste profile) by using beer for the liquid.

A couple of tips:
1.       Having your oil at the correct temperature (375 degrees) is essential.  This   is important so that the flowers do not absorb the oil.
2.      Immediately salt the flowers when they are removed from the oil (this helps the salt adhere).


:
1. Make batter
2. Meanwhile, heat oil in skillet
3. Dip each flower in batter and fry until golden brown on both sides
4. Drain on paper towel and salt immediately