Where it All Started: America’s Foodie Movement 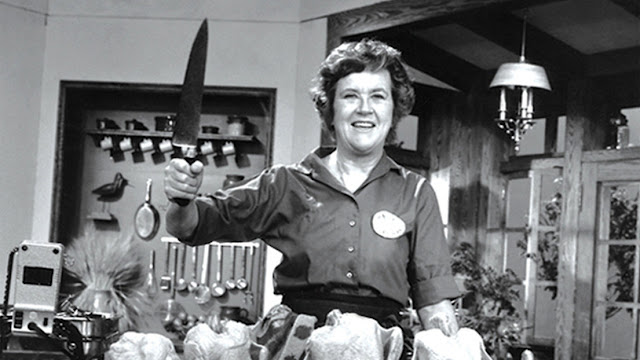 It all began in Paris.  Julia Child enrolled in 1949 in Paris' Cordon Bleu cooking school.  Having grown up in an entitled California family that had a chef, Julia didn’t know a thing about the kitchen.  However, her husband had accepted a job in Paris with the Foreign Service Department and Julia was determined to expand her horizons.  Never mind that the Cordon Bleu at that time was only open to professionals---Julia had attended a demonstration at the school and was hooked. Before long, she had talked her way into the program.

Through her cooking activities in Paris Julia met Simone Beck a few years later.  Madame Beck was from an aristocratic family in Normandy, and she had also attended the Cordon Bleu.  Soon Julia and Simone joined with another gourmand, Louisette Bertholle.  Before long the three were working on the first volume of Mastering the Art of French Cooking.

During the 1950’s American cuisine was one built around convenience.  Women were joining the workforce and didn’t have time for cooking.  Frozen and canned food composed le menu du jour.  TV dinners were immensely popular for the working mother.  Quick and easy was in:  instant powdered soups were in (remember Lipton’s dried onion soup?) and renditions of tuna casseroles appeared in every woman’s magazine.  Frozen fish sticks were a favorite as were sloppy Joe’s.  Few purchased fresh vegetables or fruits as they spoiled too quickly---besides, everything was available canned or frozen.  It was a horrific time in America’s culinary history.

Then, in 1961, came Mastering the Art of French cooking which sowed the first seeds for change in America's foodways.  But, it was Julia’s TV cooking program launched in 1963, The French Chef, which brought the idea of a brave new world to the American housewife.  With her disarming personality, Julia demystified French cooking.  By the 1970’s, she had become a celebrity, and food and cooking had become as much a part of the pop culture as fashion, art, or rock n roll.

Julia Child inspired many food personalities of today.  One was Alice Waters who grew up watching Julia on television and went to France to study cooking right after her university studies.  While the 1960's and 70's belong to Julia, Alice inspired many of us with her farm to table ideas nearly 40 years ago.  Alice's restaurant, Chez Panisse in Berkeley, is a mecca for many foodies and is one of the most awarded and renowned restaurants in the world.  Alice was also was one of founders of the entire organic food movement.   Alice owes her start to Julia.