Say Cheese for the Holidays 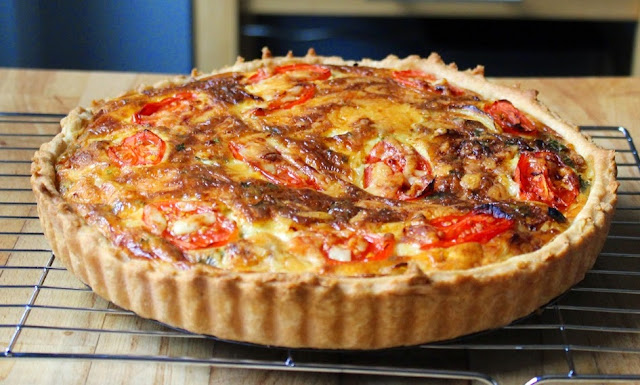 This Stilton tart is a holiday crowd pleaser
Let me start by saying it’s blue.  If you’re not a lover of blue cheese than read no further.  However, if you are enamored with the blues then look no further for a holiday splurge.  Stilton is the King of cheeses and this savory tart is very special.

Stilton comes from the area of Robin Hood’s Sherwood Forest, England’s central region.  Unlike Roquefort and Gorgonzola which are both made from sheep’s milk, Stilton is 100% cow’s milk.  All three of these well-known blue cheeses, however, rely on the same organism to create their characteristic blue-green veining:  penicillium roqueforti.  Of all of the world’s blue cheeses, Stilton has the lowest water content, as well as the lowest salt.  On the other hand, Stilton also has the highest amount of fat and protein which means that it’s the richest and creamiest of all of the blues.  No wonder I love it so.

My favorite Stilton recipe is a scrumptious tarte that I was served at a smashing restaurant in Bath, England over 30 years ago.  I managed to get my hands on the recipe and it has been a standard ever since in my home, especially during the holiday season.   This Stilton tart, along with a simple green salad and a big red that can hold up to the cheese (think Cabernet or Amarone), could easily make sugar-plums dance in your head.  The recipe can easily be made the day before, and any left-overs can be frozen for another winter’s feast.  The dish can be served warm or at room temperature.

Put flour, salt and butter pieces into food processor fitted with a steel blade.  Process just until all ingredients are mixed.  With food processor running, add liquids (egg yolk, lemon and water) a little at a time.  Stop when pastry forms a ball.  Do not over process or dough will be tough.

Place formed dough on wax paper, flatten it, wrap it and chill for at least 20 minutes.   On a flour surface, roll to 1/8 inch thick.  Place on a 10 inch round flan ring or pie dish.  Crimp edge.  Prick bottom of shell with fork and chill for another 30 min in frig.
Line shell with wax paper and then add dried beans or dried rice and bake in lower third of preheated oven.  Carefully remove the beans or rice and wax paper (can be used in another dish).  Return shell to oven.  Bake for another 10 -15 minutes until it is lightly colored.

Remove and brush the shell with an egg wash made by lighting beating an egg with a tablespoon of water.  Bake the shell for 2 more minutes to set the glaze.  Cool shell on a rack.

Mince 2 shallots and sprinkle evenly over the bottom of the cooled shell.  Top shallots with an overlapping layer of tomatoes.  Crumble Stilton evenly over tomato layer.

In a bowl lightly wisk remaining 2 eggs, whipping cream, nutmeg, salt and salt and pepper to taste.  Pour custard into the shell and bake for 20-25 minutes until the top is lightly golden and the filling is just set.