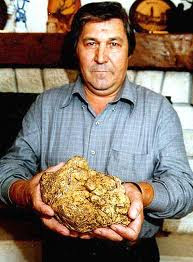 The world's largest white truffle was found in Croatia.﻿
The gourmet scene in Croatia during the last decade has positioned the country as the leading high-end culinary destination in Eastern Europe…especially in its northern province of Istria which shares a border with Italy.  Here in Italian-influenced Istria, white & black truffles have catapulted the region to the newest foodie mecca.  Moreover, Istrian olive oils are winning top international awards, and Istria’s wines are receiving 90+ scores from Robert Parker.


Moreover, Croatia embodies the Mediterranean Diet’s holy trinity of wine, fish & olive oil.   With more than a thousand of miles of seashore, its coastal cuisine has a distinctively Italian flavor thanks to centuries of occupation by the Venetians & Romans.  This strong influence from Italy is shown in their breads, curing of meats, cheeses, pastas, olive oils, as well as their wines.   Although our journey will be primarily along the dramatic coastline, we will venture inland on excursions where the gastronomy switches to reflect the years of Austrian, Hungarian & Turkish domination.


If Croatia is on your bucket list, Wine-Knows will be featuring in September 2014 a tour that has been strategically planned to coincide with the grape harvest, as well as Croatia’s white & black truffle season.  It’s an absolutely magical time to visit the Mediterranean for any gourmand or oenophile.  Also, the month of September is idyllic for travelers seeking perfect weather…without the hordes of summer tourists.  For more information about Croatia, check it out: www.WineKnowsTravel.com.
Posted by June Forkner-Dunn, PhD at 1:00 AM