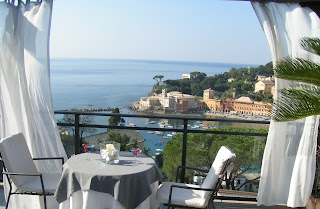 I’ve been to ’s northern Mediterranean coast (Liguria) too many times to count: jaw-dropping , the wildly popular Cinque Terre, luscious Santa Margherita, sweet little Lerici, stunning Camogli, and so forth.  All of these villages pulled so strongly on the strings of my heart that there was no reason to look further….until an Italian friend showed me photos of her wedding in Sestri Levante.  My first blissful day in Sestri Levante was only a few days ago.

I have mixed feelings about letting this cat out of the bag for fear that Sestri will become the next Cinque Terre.  (I fell in love with the Cinque Terre >30 years ago----it has since been ruined by “ on less than a Shoestring” guide books). But, Sestri is one of those places that just begs to be shared.
Situated on two little connecting bays, Sestri Levante is perfectly positioned halfway between and the Cinque Terre.  A charming fishing village, it’s popular with Italian tourists in-the-know (and there’s not an American tourist to be found….my kind of place). There are smart hotels, upscale restaurants and fashionable shops, but they are mixed with seaside trattorias, mom and pop grocery stores and pharmacies---all owned and operated by people who still live in the village.
I’m so impressed with Sestri Levante that I’ve decided to include this little piece of paradiso on next year’s Wine-Knows Truffle tour.  The full trip is showcased  on our website, www.WineKnowsTravel.com.
Posted by June Forkner-Dunn, PhD at 1:00 AM